Lenovo Legion 7i Review: There Is No Other Way To Put It, This Gaming Laptop Is A Beast

The Lenovo Legion 7i is priced at Rs 2,46,690 and that is as premium as a price tag gets in the world of gaming laptops. But a quick glance at some of its rivals proves this is actually a very solid deal for gamers.

Gaming laptops are serious business these days. We are spending more time at home, and there is that pent up stress after the never-ending work from home routine—a bottomless pit that refuses to be filled, no matter what you do. It is no surprise then that gaming is a lot more in focus. After all, you need that immediate outlet of anger and irritation on some days—and some fast laps around Monza or shooting a few heads off, both virtually of course, is a sensible course of action. All things considered. As is the case with work PC and laptops where a dodgy machine will no longer cut it, the more regular gamers are also in the hunt for gaming laptop upgrades if their existing rig isn’t really up for it anymore. The Lenovo Legion 7i gaming laptop, therefore, arrives at a good time ahead of the Diwali festive shopping season.

The Lenovo Legion 7i demands you splurge big bucks. It is priced at Rs 2,46,690 and that is as premium as a price tag gets in the world of laptops. It is therefore only understandable that you will look around and scout for a better deal, if there is one. Chances are, you won’t find one that doesn’t compromise on the specs sheet. The Lenovo Legion 7i gaming laptop variant that we are testing here runs an Intel Core i7-10875H vPro processor (this is the 10th gen Intel Core processor), with 16GB RAM. This gets the Nvidia GeForce RTX 2080 Super Max-Q (8GB) graphics and a 15.6-inch Full HD display with the 144Hz refresh rate. And then there is 1TB SSD storage, which is mighty fast too. One of your options right now is the Asus ROG Zephyrus S (starts around Rs 2,99,900 for the larger 17.3-inch display) has the same graphics as the Lenovo Legion 7i gaming laptop but makes do with an older Intel Core i7 (9th gen) processor. You also have the Acer Predator Triton 500 (around Rs 2,49,000) which also has the same display size but a 9th gen Intel Core i7 chip. These are just two instances. Suddenly, the Lenovo Legion 7i doesn’t look like a bad deal. 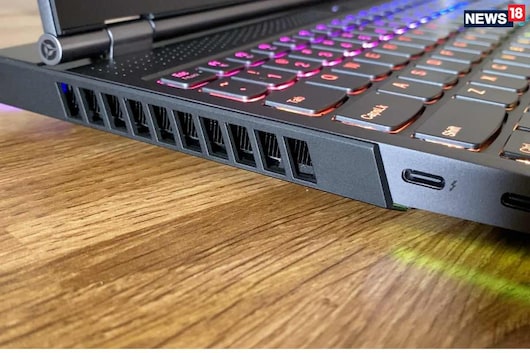 Restrained And Youthful, Depending On The Need Of The Hour

There are two types of gaming laptops in the world. You have the outgoing personalities such as the HP OMEN laptops, the Dell Alienware m15 or the Asus ROG Strix series. Then you have the more restrained personalities such as the HP Pavilion Gaming laptops, the Asus ROG Zephyrus G15 and the Lenovo Legion 5Pi. These are two very different visual approaches to gaming laptops, and there isn’t any right or wrong here. Consumers pick what they prefer more, which at times is also dictated by what else they intend to do with their gaming laptop. Work perhaps? Carry it to office occasionally? The RGB elements can be turned off, mind you. The Lenovo Legion 7i, in a way, sits in the middle of these two schools of thought. It is restrained enough to look professional as it sits on your workstation and your boss walks past. And is youthful enough to get ready for some hardcore gaming when the ambient lights go down and colourful keyboard illuminates.

The Lenovo Legion 7i gaming laptop has an aluminum chassis and what emerges after everything that includes anodization and sand blasting, is the very cool looking slate grey colour. Why I say cool for a shade of grey is mostly because it genuinely looks nothing like the typical boring greys you may be visualizing. At some points when light reflects off it, there is a hint of blue in there somewhere. Maybe my eyes are playing tricks on me, but it is all very pleasing. The Legion logo on the lid is laser engraved, and you may not immediately realize it, but a part of it illuminates too. Cool.

As it is to be expected, there are a lot of integrated lighting accents all through the length and breadth of the Lenovo Legion 7i. I have already mentioned the one on the lid. There is a strip near the bottom, the cooling vents get the illumination too and of course, the keyboard. Basically, play on this in the dark and you’ll get a nice illumination on the table as well.

Above the display sits the webcam and as is now a standard fixture in most recent Lenovo laptops, the Lenovo Legion 7i also gets the physical privacy shutter slider to block off the webcam. This is in addition to the Privacy Mode software option, but this physical slider is great if you don’t easily trust software.

All the ports are behind the display, in what seems like a dock extension, but isn’t. I remember laptops used to feature this sort of port placement as standard many years ago, though now, gaming laptops find this the most relevant. Cool, because it hides away the clutter of peripheral wires. Helpfully, accompanying each port is a visual indicator light that comes on whenever you plug something into any of the ports.

There Is No Doubting The Raw Performance

Honestly, at this price, 32GB RAM wouldn’t have felt out of place, purely from a futureproofing standpoint. That being said, this machine is rocking what can only be described as true gaming laptop level performance. At the highest visual settings, this did well over 100fps for the racing games that I tested on this. What helps is the Full HD display, albeit it is much smoother with the 144Hz refresh rate. Nevertheless, if you intend to hook this up to a higher resolution display, the Lenovo Legion 7i will have no problems keeping up. And you should be getting above 60fps even on the most visually complex Grand Theft Auto V at the highest resolution settings—drop a few things down a notch, and it’ll only become better. The Nvdia Dynamic Boost utilizes the GPU and the CPU depending on workload to better manage the frame processing. 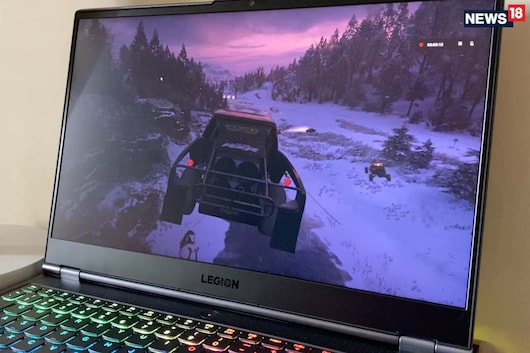 Keeping a gaming laptop cool isn’t the easiest of tasks, and something that product designers spend countless sleepless nights fretting over. It seems the good folks over at Lenovo did the same as they designed the Lenovo Legion 7i gaming laptop. To a large extent, they have succeeded. Simply put, they took the Lenovo Legion T740 gaming laptop, understood where that design needed improvement, and returned with what is undoubtedly a larger ventilation area. There are four outlet vents and the massive intake vent on the underside complements that. There are no inserts taking up space in any of these critical elements, which means less things getting the way of the cooler air going in and the warmer air being pushed out by the fans.

That is not all. Inside are two fans. Not any ordinary fans, but they apparently total up to 73 liquid-crystal polymer fan blades. This, including the 6 thermal sensors placed inside the Lenovo Legion 7i, are all a part of what Lenovo calls the CoolFront 2.0 cooling system. I quite like the controls in the Lenovo Vantage app that lets you choose between Performance, Balanced and a Quiet Mode—this manages how much the CPU and GPU have to work, depending on the apps you are using at the time, in order to maintain the level of performance you have chosen. Neatly enough, irrespective of the mode you are in the rest of the time, the system can be set to switch to the high-performance mode as soon as a game starts to load.

This does have a significant bearing on the overall experience. I noticed that even for simple enough tasks that include lots of Microsoft Edge tabs and some Microsoft Word docs open, the Lenovo Legion 7i still had fans whirring up at regular intervals—in the Balanced mode. However, switch to the Quiet mode, and things calm down significantly for that sort of work requirement. And the moment Forza Horizon 4 Ultimate Edition (Rs 4,399 on the Windows Store; included with Xbox Game Pass) loaded, the mode switched almost instantly. The fans powering up were another giveaway, in case one didn’t notice the switch.

Yet, while gaming, there is no getting away from the fact that this system is configured to be aggressive with the fans to ensure heat dissipation from the time the game loads—not reactively power up once the machine has become warm and performance has seen a bit of a hit. That does get irritating at some point, but if you have a good pair of headphones in place, you’ll appreciate that even after an hour of gaming, there are no dropped frames or performance slowdowns. This Display Hits The Right Notes, Including The Resolution

The Lenovo Legion 7i has a pretty vibrant display. This is Full HD, and for me, that really hits the sweet spot on a laptop. This ticks off the HDR requirements, so all the Netflix content in Dolby Vision, will look gorgeous. Same for the games that support HDR too. The moment you switch this on and set it up, the richness of the colour and the very good brightness levels really get your attention. This is rated at 500nits brightness and for most intents and purposes, this is just spot on. The IPS display advantages in terms of colour are very apparent. I quite liked how the reflections don’t really get in the way on this laptop.

Do Not Forget The Charger At Home

This is where the Lenovo Legion 7i does fall behind, perplexingly enough. For what is a splendid showing all through, battery life on this gaming laptop struggles quite a bit. This is an 80Wh battery. In the standard performance mode, the Lenovo Legion 7i lasted barely 3 hours when used as a regular work machine—lots of Microsoft Edge tabs, a couple of Word documents that were being worked on and a 45-minute video call along the way. Switch to the Quiet Mode, and things become better—this lasts close to 5 hours on a single charge. All through, the brightness was at 30% or whereabouts. In a way, it is hard to really hold that against a powerful gaming laptop, which is mostly going to be used in the plugged-in state—at least when you are using it for gaming.

There is the Lenovo Rapid Charge feature though, which juices up this battery to 50% from the full discharge state, in 30 minutes. All said and done, you shouldn’t really forget the massive 230-watt charging adapter brick at home when you do step out of home next, either to go to a friend’s place for a bit of gaming or back to the drab and dreary hours to spend in office.

The Last Word: This Is More Than Game For Any Battle

Looking at the landscape of rivals around, it really is hard to find faults with the Lenovo Legion 7i. The gaming performance, what it set out to do in the first place, is top notch. It is built well, it is ticking off the spec sheet checklist well enough, the bright and rich display and a lot of attention to the cooling tech embedded in this, makes for what is certainly a gaming laptop that has come together neatly. Yes, you will perhaps find an odd feature that is a notch above in one of the rivals, but look closely, and as we have established above, they will be found lacking on some other critical aspect of the spec sheet soon enough.