Lenovo Smart Display 10 Review: When Smart Gadgets Have a Great Personality Too

The Lenovo Smart Display 10 is finally here. And we can safely say that Amazon’s Alexa powered Echo Show now truly has some competition. Belatedly, Google Assistant is providing Amazon Alexa with some competition in the smart display stakes. Not soon after Google launched the Nest Hub in India (around Rs 9,999) which was the first time a Google Assistant and Android Things powered smart display arrived on our shores, Lenovo has jumped into the fray with the Smart Display 10. Foundations remain the same, be it the Lenovo Smart Display 10, the Google Nest Hub or the Amazon Echo Show. There is a virtual assistant at your beck and call, ready to provide you with the answers to your queries and all the worldly wisdom you may want, and there is a sufficiently large display that adds a visual element to some of those responses. The Lenovo Smart Display 10 is priced at Rs 13,999 and that means it costs a lot lesser than the Amazon Echo Show (around Rs 22,999). That is a good start. But what else?

What really is a smart display? Well, it is like a smart speaker, except that it also has a display. That display real estate comes in handy as a bedside alarm clock, for viewing videos, for using this as a photo frame or even for a visual guide to recipes while you cook. You interact with it the same way as you would with a smart speaker, which is call out to it with your query and expect a response. More in anticipation than plain hope, mercifully. In this case, you could also get a visual response, which just adds a lot of value to the entire proposition. The way this works is Google Assistant takes care of your queries while Android Things, a minimalistic Android based operating system for smart devices does the value additions such as information overlays, smart home controls and more. At no point will you be able to identify which is which, such is the seamless integration of Assistant and Android Things.

Also Read | Amazon Echo Show Review: Alexa Gets a Display, And This Could be Start of Something Amazing

The Lenovo Smart Display 10 is also one of those rare pieces of tech that can be placed horizontally and vertically. Interesting? Well, it works, sort of. By default, it sits horizontally and that is how it is designed to work most of the time. Except that Lenovo have put small rubber feet on the side also, that let you prop this over vertically too—that is great for Google Duo video chats with friends and family. In both positions, the Lenovo Smart Display 10’s screen looks at you from a slightly reclined position, which is quite comfortable to use. However, while the Duo calls work well when the smart display is kept vertically, the software isn’t designed as yet to be able to morph into that usage scenario beyond the video calls. To be honest, would have been great if it could have, and that would have added to the uniqueness factor as well.

We had noted in the Google Nest Hub review as well that Google’s smart displays do have that advantage over Amazon Alexa and the Echo smart displays, irrespective of how amazing Alexa may be anyway. The thing is, Google already knows so much more about you, which makes the responses to your queries and the information stream coming your way a lot more tuned for your needs. Add to that the closer integration with Google’s own services, including Photos and YouTube, which just adds that extra layer of convenience. 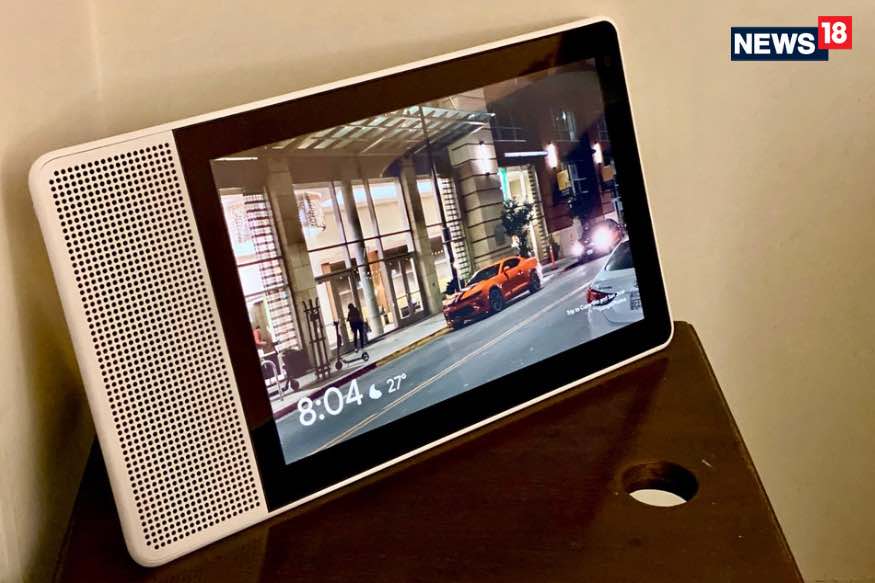 A simple as Ok Google, set this up

Setting this up is a breeze with the Google Home app (free for Android and iOS). Sign in with your Google account, and everything sets up on the Nest Hub without needing your intervention. That means all your Google services are signed in seamlessly. You can get the usual suspects up and running on this in no time at all—weather updates, news, routines, calendar, alarms and voice-based web searches.

The canvas of colour

The 10.1-inch display itself looks very good. This is an IPS screen with the 1280 x 800 resolution. Colours look good and sharpness is adequate too, though we would have preferred a bit more of the latter. This is a very bright screen, and you’ll notice it even from the farthest corner of a large room. That also helps deal with ambient light and reflections—Lenovo says this has 86-degree viewing angles.

There is an Ambient EQ sensor, something on the lines of the Google Nest Hub, which not only does auto brightness according to the lighting level in the too, but also alters the colours on the screen to match the tone and temperature of the ambient lighting in the room at the time. Warmer lighting makes the display warmer, while switching on a cold white LED light makes the display also a lot cooler in terms of the colour temperature. And when you finally turn off the lights for a good night’s sleep, the display goes very close to dark and switches to a large digital clock—easy for a peek as you momentarily wake up in the middle of the night. But that is not all. I noticed that if the Lenovo Smart Display 10 doesn’t detect any motion around it for a while, it goes into a sort of a power saving mode and wakes up the moment you wave a hand in front of it or there is movement near it.

The photos have been found

I have this sneaky feeling that like any smart display, you will love using this as a digital photo frame. The great screen is a good start. Then there is the seamless integration with your Google Photos library that just makes it simple to decide which photos or albums to show on the display. The Lenovo Smart Display 10 can be set up to show photos from specific albums that you may have made or even Live albums that Google Photos regularly updates after deploying the smartness of facial recognition on every new photo that you click and upload from your phone. My little one loved the Google Nest Hub because it allowed her to swipe through her own photos and admire how quickly she is growing up. She is 19 months at this moment. And she has taken to the Lenovo Smart Display 10 with similar ease. Swiping photos, invoking the Maps, YouTube and Spotify cards and what not. But what the Lenovo Smart Display doesn’t show are videos and “Live” photos, though that is absolutely not a miss.

And herein also lies the Lenovo Smart Display 10’s biggest advantage over the Amazon Echo Show. The ability to use the brilliance of Google Photos as it sits on the mantlepiece of somewhere in the living room, is priceless.

Not exactly an audio treat

Keeping in mind the large footprint of the Lenovo Smart Display 10, one would expect it to pack in audio hardware that is capable of matching the Amazon Echo Show, even if not better it. On paper, the combination of a 2-inch 10-watt speaker with two passive tweeters should be able to do a good job, at least with everything else in a typical soundstage, lower frequencies aside. However, from what my ears could gather, the sound quality is at par with a Google Nest Hub—and that is not exactly a praiseworthy stat. It will do well as a smart speaker for music as long as you don’t expect this to rock the party. There are limitations, and you need to work within those.

Google Nest Hub and the Lenovo Smart Display 10 are taking very different approaches to the whole debate of putting a video camera in your living room or bedroom. The Nest Hub doesn’t have one at all, so that puts anyone who is even a bit concerned about their privacy, at ease. The Lenovo Smart Display has a camera, which is why the Google Duo video calls work. I couldn’t find a software option to disable the camera though there is a physical shutter slider to cover the camera. While Google’s smart display platform doesn’t have something as disconcerting as the Drop In that is a feature in Amazon’s smart speakers and displays, I’d still prefer to keep the camera covered. The Lenovo Smart Display 10 has an instant advantage here.

There are two microphones that hear your voice and recognize it if you have done the voice match, and they seem to be doing a good job of hearing the commands even from the farthest corner of the room.

Google’s smart display and smart speaker software is all about simplicity, clear layouts, crisp and easy to read fonts, slick smart home device controls and swipe gestures that you eventually get used to. Swiping inwards from the right side of the display slides out information cards including Google News, YouTube recommendations and in our case, Spotify as well. I couldn’t find a way to customize the order of these cards for instance, and something on those lines would be quite useful.

Ok Google, it’s all in the family

The biggest advantage that the Lenovo Smart Display 10 has is the access to everything Google—your Google Photos, your YouTube, Calendar, News and so on. That means every query you point its way comes back with a response that is perhaps more in tune with what you need. That is because you have probably been using Google on your desktop and your smartphone for years now. And it knows a lot about you. While the Google Nest Hub is a great entry point into the smart display ecosystem for everything Google, the Lenovo Smart Display 10 is actually a step up with a larger display.