Apart from the hype surrounding the display on the LG Q6, how does the smartphone rank on an overall smartphone performance? Here is our experience with the smartphone as we find out what the latest LG device has to offer.

LG has been known for introducing new designs in its high-end smartphones since the beginning of its LG V series. Innovations like dual-display that has a small, separate strip of display on top for easier access to functions, an 18:9 display, which is now widely known as Samsung Galaxy S8’s Infinity Display, were both introduced first by LG. Now the electronics giant has decided to offer similar features in its budget offerings as well. The recently launched LG Q6 is a prime example of that. LG Q6 comes as the first budget segment offering that carries an 18:9 wide aspect ratio display. Other companies have now, of course, followed the trail, such as Micromax, with its Canvas Infinity. Regardless, being the first is enough to make the LG Q6 stand out in the crowded budget segment.

Apart from the hype surrounding the display, how does the LG Q6 rank on an overall smartphone performance? Here is our experience with the smartphone as we find out what the latest LG device has to offer.

To start with, the LG Q6 borrows its design heavily from its high-end doppelganger, the LG G6. The smartphone sports a 5.5-inch near bezel-less display that is designed in a way to ensure easy one-handed operation. The display offers a 2160 x 1080 pixels resolution that is bright, crisp and delivers a very good experience for reading, watching videos and playing games. The overall design of the device has been kept simplistic with a power button on the right, volume rockers on the left and a primary camera at the back. The smartphone surprisingly misses out on a fingerprint sensor and instead relies on facial recognition for security.

The performance of the LG Q6 is decent, owing to the 64-bit octa-core Snapdragon 435 SoC. It can handle multi-tasking for an average smartphone user and get you through a day’s work along with providing some entertainment in the form of online videos and music. The 3GB RAM also helps with this.

One big plus offered by the LG Q6 is its UI on top of the Android 7.1.1 Nougat. The LG UI 5.0 embedded into the smartphone is surprisingly neat and simple to use, with segregated tabs for many functions. It successfully manages to reduce the time wasted in looking for any function that you want. More importantly, the UI can be further customised to suit the user’s needs, with the option of rearranging the navigation panel and the overall single-layered layout.

The LG Q6 comes with a dual-SIM connectivity. Adding to this, LG has offered a dedicated microSD slot in the smartphone as well which is certainly very useful to many smartphone users. The internal storage on the smartphone is 32GB, out of which, only 26GB is available for use. The good part, however, is that it can be further expanded to a whopping 2TB.

Simple software and app offerings such as the Comfort Mode, RemoteCall Service, LG Mobile Switch, Break Time, LG Smart World and Smart Doctor are good additions and come in handy as and when the need arises. The LG Q6 comes with a 13-megapixel primary camera with a CMOS sensor and a f/2.2 aperture. Having those specs, the camera certainly does not do justice to the images clicked through it. The images clicked through the LG Q6 are at times overexposed, out of focus or just lack the detailing that you would expect. It offers a ‘square camera’ feature though, which some users might find to their taste. While the camera is good enough to click simple images for social media postings (thanks to filters) and sharing with your peers, chances are that you have experienced a much better camera at the same price point (like Honor 6X). The same goes for its 5-megapixel selfie shooter, which tries to compensate for the lack of quality images by offering features like wide-angle selfies. The low-light capability of both the cameras is not too great either, managing to provide just about average quality of images to not be ranked as “bad”.

The battery power on this one is 3,000 mAh, which is just enough to last you a day if you limit your use to calls, web-browsing and social media usage. Include gaming, video playback and other such heavy tasks in this and you will see it failing miserably. To add to the disappointment is the absence of fast charging support on the smartphone.

The most unexpected drawback of the LG Q6 is that the ‘beautiful’ and ‘elegant’ display is equally fragile. While clicking pictures of the smartphone for this review article, the device fell flat on its face on a table on which it was kept upright and it cracked. So much for the Corning Gorilla Glass 3 protection that the smartphone boasts of. The whole incident makes us wonder about the credibility of Gorilla Glass Protection for smartphones. Bottom-line is,

do not go for the LG Q6 without a tempered glass.

In fact, an overall mobile case for the LG Q6 is suggested, as the back panel easily gets smudges and scratches with overtime usage. 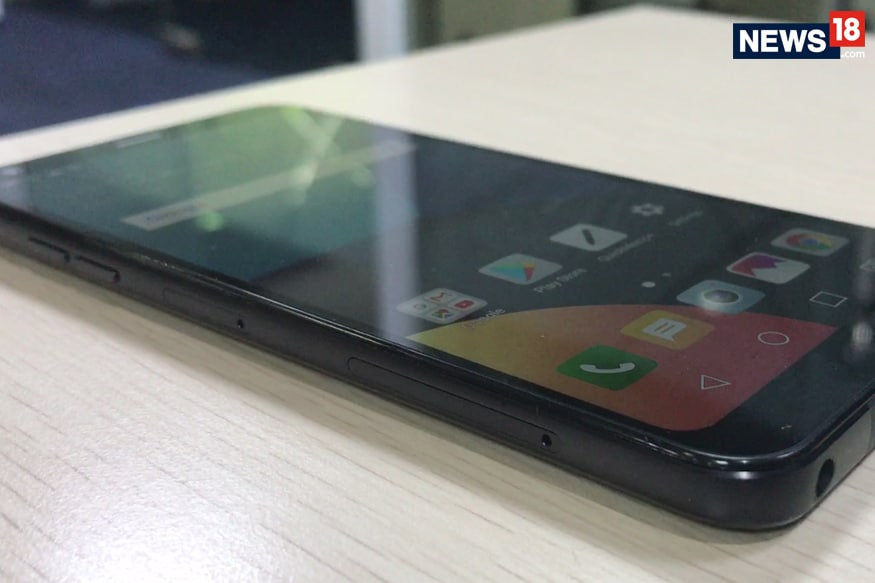 While the design of the LG Q6 is undoubtedly one of the best that can be seen at its price range (Rs 14,990), its overall performance is certainly not something a power user would want. There are smartphones in the market that can perform at equal capacity, if not more, and are priced lower (or equal) than the LG Q6, such as the Xiaomi Redmi Note 4, Moto G5 Plus, Honor 6X and more.

To keep it simple, you should go for the LG Q6 if you want a beautiful display to flaunt amongst your peers, need a neat UI with an as easy operation as it gets and if your smartphone usage is restricted to basic smartphone functionality, occasional gaming minus the heavy tasks. The LG Q6 can certainly provide you with best viewing experience at its budget.