LG, which until now had no strong warrior in the under-Rs15K Indian smartphone market, has now introduced the X Screen smartphone in India. The phone is priced at Rs 12,990 and will go on sale from July 20. But does this phone with two screens have the potential to compete with value-for-money phones from emerging players such as Xiaomi and LeEco?

The major highlight of the phone is its display. The LG X Screen comes with two screens - one is a 4.93-inch primary screen, and the other is a 1.76-inch Second Screen, which is located right on top of the main screen.

While the main screen is pretty much like a standard screen, it’s the the second screen that defines its exclusivity.

The Second Screen has an always-on display that allows users to check basic information like time, date and notifications without having to wake up the phone.

The Second Screen, by default, also shows various toggles including that of Sound, WiFi, Flashlight and Bluetooth. You can also customise content that appears on the Second Screen.

The key advantage of the Second Screen here is that you can have access to a lot of functionalities, including music player controls and recent apps, without unlocking the phone. The Second Screen is displayed on the LG X Screen. (Image: News18.com)

The concept of a dual-screen display looks interesting and hints at easy accessibility to the frequently-used tools, but its usability in the real world can only be ascertained after using it for a longer period.

Coming to its design, the phone looks neat and the glass fibre back adds to its looks. The rounded corners make it comfortable to hold and the phone is light in weight.

The LG X Screen features a 13 megapixel rear shooter and an 8 megapixel front camera. In a little time we spent with it, we could only test the phone in low-light environments. Both cameras generated decent result with some noise in areas with very low light, but they had a shutter lag. But the actual worth of its cameras can be known after putting them to use in other light environments. 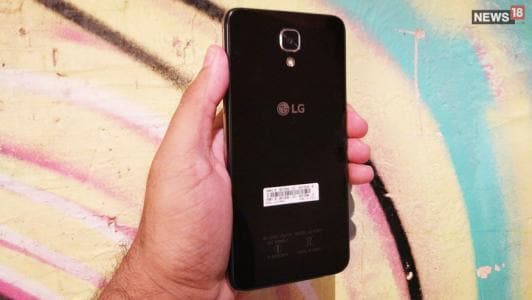 The LG X Screen is a dual-SIM 4G phone - but it has a hybrid SIM slot. This means the second slot on the SIM tray can either accommodate the second SIM or a microSD card. This is where the Moto G4 outscores it.

The phone packs in a Qualcomm Snapdragon 410 chipset coupled with 2 GB of RAM. There are competitors in the market that offer a better chipset in this price range. The phone runs Android Marshmallow and has an internal storage of 16 GB with an option to expand the storage. There is a 2,300 mAh battery that looks decent on paper, but we are yet to test its performance. The phone will be available in two colours - black and white.

With the X Screen, LG aims to make a space for itself in the mid-range Indian phone market. While the dual-screen display on the X Screen may give it an edge over rivals, it alone cannot go on to define its success.

Watch this space for the review of the LG X Screen.