Micromax IN 1 Review: Made In India Budget Smartphone Battles See Their Strongest Chapter Yet

In terms of the design, the newly launched Micromax IN 1 looks similar to the Micromax IN Note 1 with a hole-punch cutout for the selfie camera and a rectangular rear module housing the triple cameras. The phone sports a 6.67-inch display with the native 2,400 x 1,080 pixels (Full-HD+ resolution), 440 nits brightness and a 20:9 screen ratio. The screen panel has Rainbow Glass protection on top that is similar to Corning Gorilla Glass 3. Under the hood, the Micromax IN 1 carries the MediaTek Helio G80 processor paired with Mali G52 GPU at 950MHz, up to 6GB of RAM, and 128GB of storage.

For the Micromax IN 1, competition is tougher now, than what the IN 1b and IN Note 1 faced. It is not going to be easy, but there’s a lot the IN 1 does well.

Make in India. Made in India. Atmanirbhar Bharat. Three phrases that have brought the attention, and perhaps rightly so, back on Indian brands too. That includes smartphones as well, of course, and Micromax’s really strong reemergence is an extremely positive indicator for the Indian smartphone market. Particularly at and around the more affordable Android smartphone price points, which are incredibly popular with the masses. More options for us. More choice. More competition. In the end, better products for us to buy. Speaking of better products leads me neatly to the Micromax IN 1, the newest smartphone that is also dubbed “India Ka Naya Blockbuster”. The thing is, competition is even tougher now, just a handful of months after its siblings, the IN 1b and the IN Note 1, arrived on the scene. The work is clearly cut out for the Micromax IN 1.

There’s that old world charm to the Micromax IN 1’s overall design. I’ve looked long and hard, but not been able to put my finger on exactly what it is. But you may agree with me that this has some elements of the previous generation of affordable Android phones, particularly with the gradient-esque finish on the back. It is not the slimmest phone, measuring 8.99mm to be specific, but hold it up, and it feels much slimmer than that. Whatever design trickery there is, it has clearly worked. There’s the 3.5mm headphone jack too—which is great, and particularly for Android phones that don’t cost a lot of money. There’s the somewhat shimmering X pattern on the back, and the plastic feels good quality. At times, it feels a tad thinner than what you may have preferred, but there isn’t any unnerving flex or any irritating rough edges with the build and design of the Micromax IN 1. Micromax promises that this back panel will not be a fingerprint magnet, and I’m happy to report back that it absolutely doesn’t catch any fingerprints or smudges. Except the camera module, which is still a glossy black finish. But the entire back does show up dust quite effortless though.The fingerprint sensor sits on the back, but if I am completely honest, the same being integrated in the power key (albeit that would have required a completely different design) would have taken the experience a notch higher. 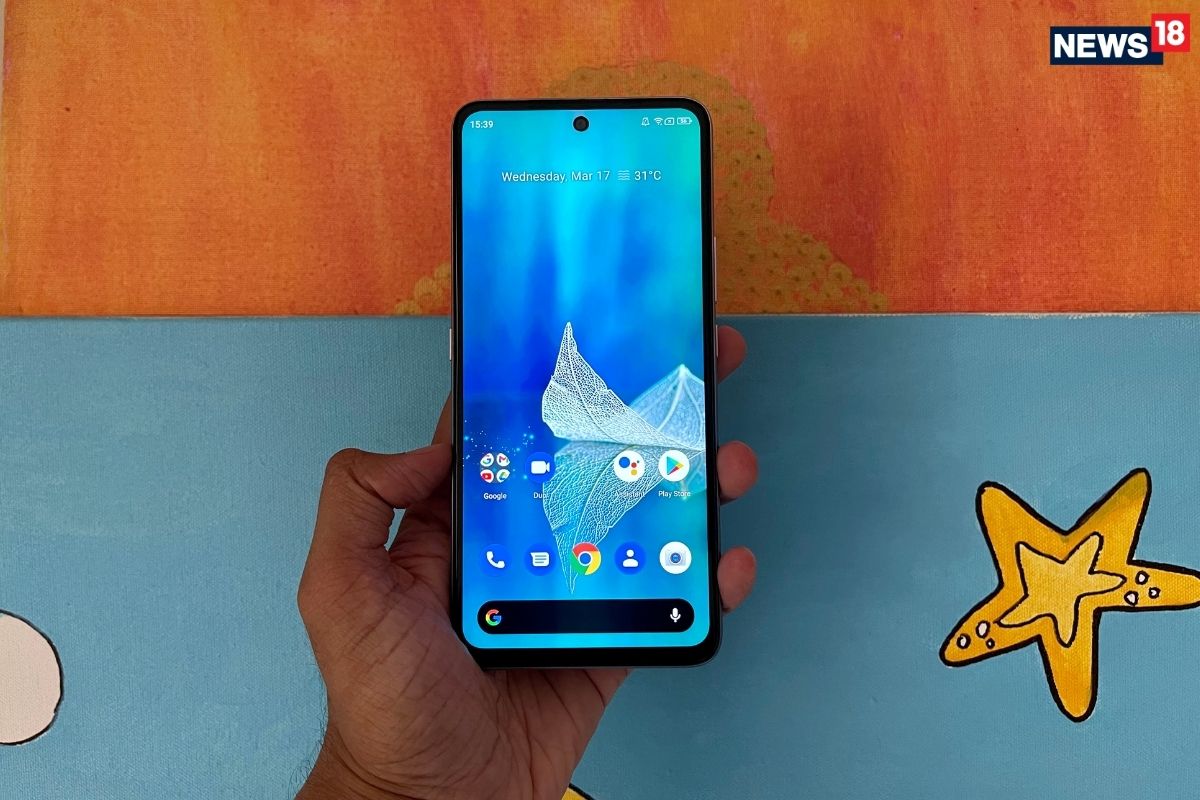 The Micromax IN 1 runs the MediaTek Helio G80 chip, which for intents and purposes, will be very similar to the likes of the Qualcomm Snapdragon 662 processor that powers a lot of the phones around the Rs 10,000 price point. There are two RAM configurations to choose from—4GB and for a bit more, 6GB. I’d honestly recommend paying that extra for the 6GB RAM variant, which also gets you 128GB storage instead of 64GB, for the additional performance headroom that comes with it. You may feel 4G is more than enough now, but with more apps you use, it may not be enough 12 months down the line. Get that extra buffer if you intend to hold on to the phone for a while. In terms of the pricing as well, the Micromax IN 1 sits just below the IN Note 1, which has the slightly more powerful MediaTek Helio G85 chip. Performance is exactly how I expected it to be—it delivers on exactly what an affordable Android phone should do, without really feeling the load. There isn’t any hesitation as apps open or you switch between them. The processor, storage and RAM will eventually have a virtual ceiling after which you’ll start to notice some stutters, but for most users, your apps will be able to stay well within that if you don’t leave a multitasking clutter on your phone.

What helps is the fact that system resources are free-er because there isn’t any additional interface wrapped around Android. Nor are there tweaks that you may or may not want to the software, and perhaps the most important bit—there are absolutely no preloaded third-party apps on the phone. That makes the Micromax IN 1 one of the truly rare phones to offer a pristine clean Android experience, and also not have a single preloaded app. Nokia phones replicate this sort of seamless experience around the Rs 10,000 price point, but that’s it. Most rivals give you Android that is heavily customized, have a plethora of third-party apps preloaded and waiting to give you a nasty surprise on your new phone and the performance eventually takes a hit at some point down the road. Do remember though, the Android 11 update is in the works and Micromax says the IN 1 should see the new update land sometime in May this year. That’s the only work in progress, so to say.

No need to go running to find the charger or a wall socket too. The big 5,000mAh battery returns good stamina levels as well. A freshly set up phone, with a million things being synced in the background and used for extensive screen use (YouTube and web browsing), social media apps to waste a lot of time (the clock ticks and you don’t realize how much time is wasted) as well as the camera, lasted a day and a half before it blinked and had to be charged again. It is safe to assume that your usage won’t be this heavy every day, and that means the Micromax IN 1 won’t give you any battery anxiety. The 18-watt fast charger is bundled with the phone, and it is these little things that really add value. This is a large phone, and it really doesn’t try to hide its footprint. The 6.67-inch display, with the native 2400 x 1080 resolution, ticks off the brightness, visibility, crispness and colour points on the checklist. There is no 90Hz or 120Hz display refresh rate play here, and that isn’t something you should be expecting from a sub-Rs 10,000 phone. You can set the display colours with three presets—Standard, Vivid and Cool as well as the Customize option for manually tweaking the overall look. The blacks aren’t the deepest, which makes the Dark Mode a bit of a dark grey mode or something like that.

The only non-Google app on the Micromax IN 1 is the camera app, which is Micromax’s own solution since that has to drive a whole host of multi-camera photography modes, AI smarts and more. And speaking of the camera itself, the IN 1 gets a triple camera system at the back. It’s a 48-megapixel wide camera + 2-megapixel macro camera + 2-megapixel depth sensor combination, but what is missing is an ultrawide camera. That being said, it may not necessarily be a limitation for most users. It doesn’t take long to realize that the Micromax IN 1’s camera has the habit of brightening certain frames a bit more than it is strictly necessary. That means for certain daytime and good light shots, you need to frame it in a way that a light source from a side doesn’t end up looking overexposed. It is a bit unexpected but having to wring photos out from a modern-day smartphone camera, particularly with the megapixel count ticked off, just feels off. Mind you, this isn’t the first time a phone’s camera has overexposed light sources and it is something that can be fixed with a firmware update.

For the frames that don’t require so much effort, you will see a pleasant return of good colours, adequate crispness and a general sense of vibrancy that doesn’t overplay its role. A lot of phones have AI modes that really dial up the colour saturation and contrast, but Micromax’s implementation of this AI does things in an appreciably understated way and doesn’t add any unnatural elements to the framing. Most photos look well balanced, and I really like the handling of different colours. Yet, I do come away with the feeling that this isn’t a camera which you can hurry up with—not something you can take out of the pocket, open the camera app and quickly take a photo without having to bother about anything. There are times when manual focus becomes important, and I did notice a few times that moving the camera away too soon after tapping the shutter button returns a blurry image. Take your time with the Micromax IN 1’s camera, is the takeaway, and you’ll get a nice return of daytime photos.

Low light photos are where the additional exposure tendency plays a positive part, at most times. There’s more illumination for darkened areas of the frame, which means you see more details. That being said, you cannot zoom in much on these photos without some noise making its presence felt. But these will work, for most social media posts. Colours are a bit on the cooler side from time to time, but that would be my preference over a lot of smartphone cameras that either lean towards too much warmth or oversaturation due to boosting. The Last Word: As Effortless As An Affordable Android Phone Can Be

The Micromax IN 1 just adds credence to my belief that the Indian smartphone market really needs a strong showing by Indian brands such as Micromax. That’s even more true in the affordable Android smartphone space. The Micromax IN 1, which joins the IN 1b and the IN Note 1 as the third phone in the line-up, is delivering on what one would expect from an affordable Android smartphone that sits well inside the Rs 10,000 price point. Its built well, looks good with no real rough edges so to speak of, retains the 3.5mm headphone jack, delivers on consistent performance with solid battery life, a display that just works without a million features and options to complicate things and a camera that needs some effort but eventually delivers good photos. This isn’t a 5G phone, and to be fair, you don’t need to worry about that at this point of time. And the latest Android update is in the works, which is something that will add even more value to a very good phone.