News18» News»Tech»Microsoft is Now an Android Phone Maker, And Thus it Has a Future in Smartphones
3-MIN READ

Microsoft is Now an Android Phone Maker, And Thus it Has a Future in Smartphones

But the thing is, Microsoft refuses to loudly call the Surface Duo a phone. And that may point to something.

It would perhaps not be too rude for Google to be celebrating as if it has just won a battle. After all, this the closest they will ever come to an admission from Microsoft that Android is the way forward in the smartphone game. The Surface Duo which Microsoft unveiled at the Surface Event a few hours ago makes clear the new direction that the company’s smartphone business is heading in. The days when arguments were made for how Windows Phone and Windows Mobile were a match for, even if not better than Android, are a thing of the distant past—and we all know how that panned out. But all this while, when Microsoft has stayed away from making a smartphone, it has focused on getting the basics in place. And the rumors of a Surface Phone never really went away. Here we are, looking at a completely new Microsoft.

Once the Lumia smartphone chapter was closed and things were packed off at Nokia back in 2015, everyone expected Microsoft to jump straight back in with a Surface branded phone. The temptation might have been strong, but the company focused elsewhere. Apps and services for the Android phones that you may already own. Apps that take on the Google defaults in Android phones—Edge browser for Chrome, OneDrive for Google Drive, Office 365 for Google Docs, Skype for Hangouts, SMS Organizer for Google Messages and so on. Microsoft focused on its strengths and didn’t waste time trying to compete in things it was probably not going to win—a Google Play Store alternative is would have fallen flat on its face, for instance. As things stand, you can pretty much Microsoft-ify your Android phone. Microsoft Launcher as the home screen foundation, Edge Browser instead of Chrome, Outlook instead of Gmail, Office 365 instead of Google’s own Docs apps, backup everything to OneDrive instead of Google Drive and so on.

In fact, Microsoft even convinced Samsung to invest heavily in baking in its apps and services into the latest line-up of Galaxy phones, the Galaxy Note 10 series included. The more users there are logging into Microsoft services every day, the more leverage it has in terms of controlling the experience.

Yet, Google as it turns out, is the big winner. The Surface Duo is the closest Microsoft will ever come to admitting that Google has won the smartphone battle. And the best course of action now is to work together. 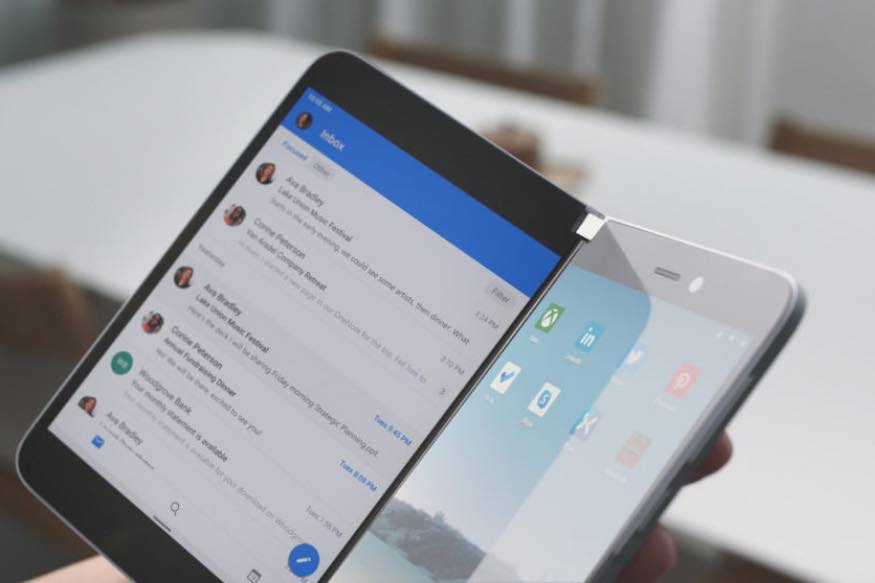 The Surface Duo will have two 5.6-inch screens merged with the help of a 360-degree hinge. Each display can run a different app, and from what we can see, Android has been skinned and customized to look a lot like some aspect of Windows. It will have a Play Store, access to all of Google’s Play Services which is a critical ingredient of the Android experience and will get the same set of updates that Google’s own Pixel phones will get. Microsoft isn’t making changes to Android that could cause fragmentation issues.

How will this Microsoft and Google partnership for the Surface Duo pan out? Google requires smartphone makers to include the full suite of Google Play Services on the phones they sell, and also place the Google apps on the home screen as well as a dedicated folder often called “Google” somewhere in the app drawer. Will Microsoft have to follow those guidelines with the Surface Duo? Or will buyers have a “Microsoft” folder instead? And will Microsoft have to preload Gmail alongside its Outlook email app?

Maybe there could be hints as to what the answers for these questions would be, in the recent ruling done by the European Union which forced Google to make the Play Store and the Chrome browser optional for phone makers to pick for their Android phones.

All in all, Google may have extracted an admission from Microsoft that it needs them for a say in the smartphone space. But at the same time, Microsoft is getting the solid Android foundations, bolting on its own layer of apps and services and keeping things modern with a dual screen device that can also be a phone. The future was foldable phones, but now we may just have a second coming of the future—a phone that is a phone but isn’t a phone. Is it?