All three iPhones will have wireless charging, along with Face ID and the display notch.

Apple is going to announce the 2018 iPhone series next month. Apple analyst Ming-Chi Kuo believes that Apple will announce the three new iPhones expected during the week of September 9, which is in line with other rumors that have pointed towards a September 12 unveil date, a September 14 pre-order date, and a September 21 launch date.

All three iPhones will have wireless charging, along with Face ID and the display notch. They will be very similar in looks, but the 6.1" budget version will only have a single rear camera. Now, Kuo has shared the table below, detailing the three handsets' specs and the differences between them. Kuo says iPhones will not have support for the Apple Pencil stylus this year because it will not offer a good user experience, despite the increased screen size., contrary to past rumors. 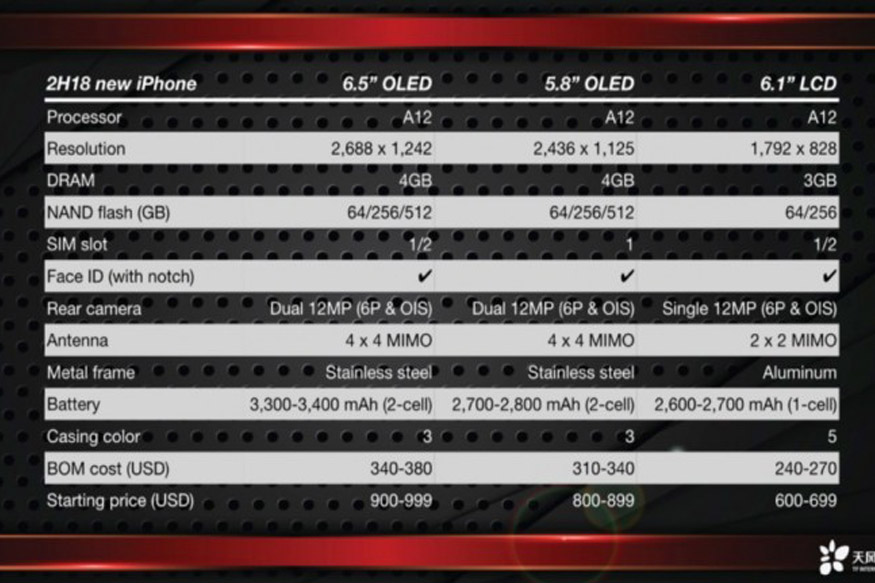 Kuo goes on to predict that the 6.1-inch and 6.5-inch iPhones will ship in single- and dual-SIM configurations depending on market and region. Kuo adds that the new 5.8-inch iPhone will have a single SIM tray and embedded SIM support. All three models, according to the analyst, are expected to be fueled by the A12 chipset that has been developed using TSMC’s 7nm FinFET architecture.