The image was captured by the New Horizons minutes after its closest approach on July 14 last year, NASA said.

The image was obtained at a high phase angle - that is, with the Sun on the other side of Pluto, as viewed by New Horizons.

Such images give scientists information about Pluto's hazes and surface properties that they can not get from images taken on approach.

The image was obtained by New Horizons' Ralph/Multispectral Visual Imaging Camera (MVIC) approximately 21,550 kilometres from Pluto, about 19 minutes after the spacecraft's closest approach. 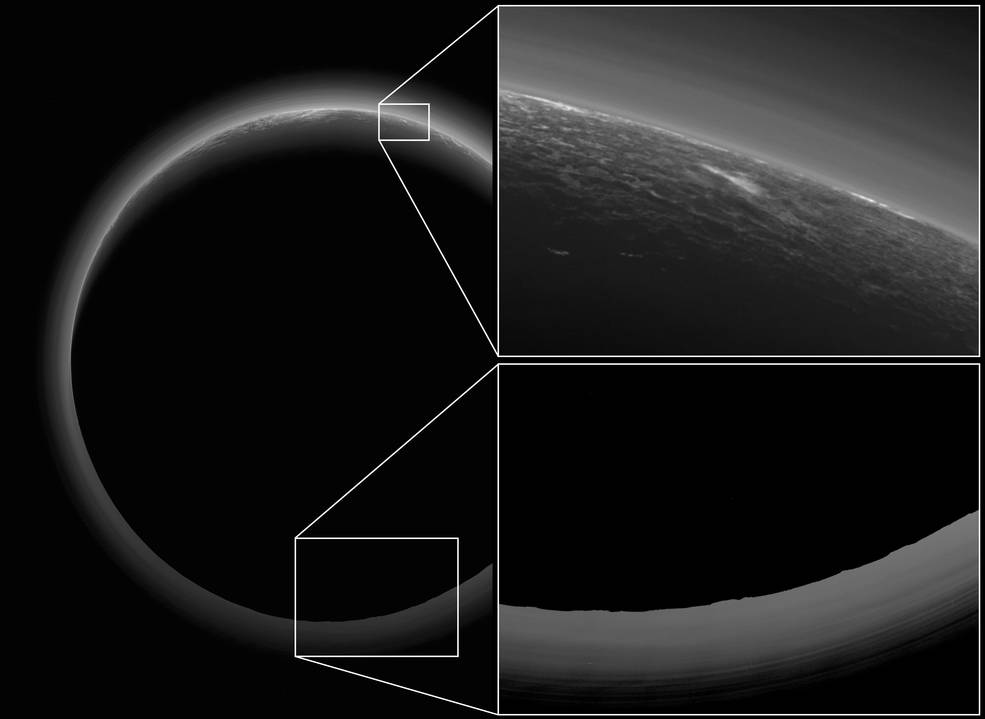 The image has a resolution of 430 metres per pixel. Pluto's diameter is 2,374 kilometres. The image shows details of Pluto's crescent, including an intriguing bright wisp measuring tens of miles across that may be a discreet, low-lying cloud in Pluto's atmosphere.

If so, it would be the only one yet identified in New Horizons imagery. This cloud - if that is what it is - is visible due to the illumination from the sunlight grazing Pluto's surface at a low angle.

Atmospheric models suggest that methane clouds can occasionally form in Pluto's atmosphere. The image also shows details on the night side of Pluto.

This terrain can be seen because it is illuminated from behind by hazes that silhouette the limb. The topography appears quite rugged, and broad valleys and sharp peaks with relief totalling 5 kilometres are apparent, researchers said.

The image, made from closer range, is much better than the lower-resolution images of this same terrain taken several days before closest approach.

The silhouetted terrains therefore act as a useful "anchor point," giving New Horizons scientists a rare, detailed glimpse at the lay of the land in this mysterious part of Pluto seen at high resolution only in twilight.