Nike React Infinity Run Review: Without Doubt, Miles Ahead of The Adidas Boost

More of the brilliant Nike React midsole cushioning is just the ticket. It leaves Adidas Boost lineup far behind, in terms of style, performance and comfort.

Vishal Mathur
Over the past couple of years, most additions to Nike’s running shoe arsenal have been all about speed. Shaving off those extra seconds from your lap times, propelling you forward and making running all the more fun. I would estimate that the journey started from the time the Nike Epic React Flyknit (a shoe I love for more than one reason—it does take me back), the Air Zoom Pegasus 35 and the Air Zoom Pegasus Turbo. In the last year, we saw the successors for these, including the Air Zoom Pegasus Turbo 2 and the Air Zoom Pegasus 36. You may even add the Zoom Fly 3 to that list of running shoes focusing on technology to make you run faster. But widening the appeal and perhaps changing track just a little bit is the Nike React Infinity Run. This one is not only about speed but tries to do that little bit more to help with injury prevention too.

So, how does it really do that? There is technology to help you with that. Under your foot, the midsole is still the brilliant React foam. In fact, there’s 24% more of it compared with the Nike Epic React Flyknit 2. The more density of cushioning there is beneath your foot, the better insulated and protected it will be. Secondly, the design of the Nike Epic React Flyknit 2 incorporates a wider footprint, quite literally. That is to give you a surer landing, prevent sideways wobbles and give you a firmer push from a stable foot landing. The Infinity Run stack measures 33mm height at the heel and 24mm in the forefoot—that means a 9mm offset. I am a huge fan of Nike’s React midsoles, purely because my feet like what is close to the perfect balance between cushioning and responsiveness. And they retain these traits with aplomb even after two years of mileage on the first generation Epic React Flyknit. There will be inevitable comparisons with the Adidas Ultraboost 20 (this is priced around Rs 17,999). The Nike React Infinity Run costs Rs 13,995. You save a lot of if you choose right. I have said it before, and I will say it again—Nike React foam provides much better balance than Adidas’ Boost cushioning material. No numbers or data to argue with. Just unhinged and unadulterated experience of wearing running shoes on different surfaces. I know what my feet feel. Boost also doesn’t retain this much suppleness over time (again, no data but pure experience), which makes Nike’s React effort and improvements even more creditable. Plus, there is more React foam in this shoe. More is better, this time around. 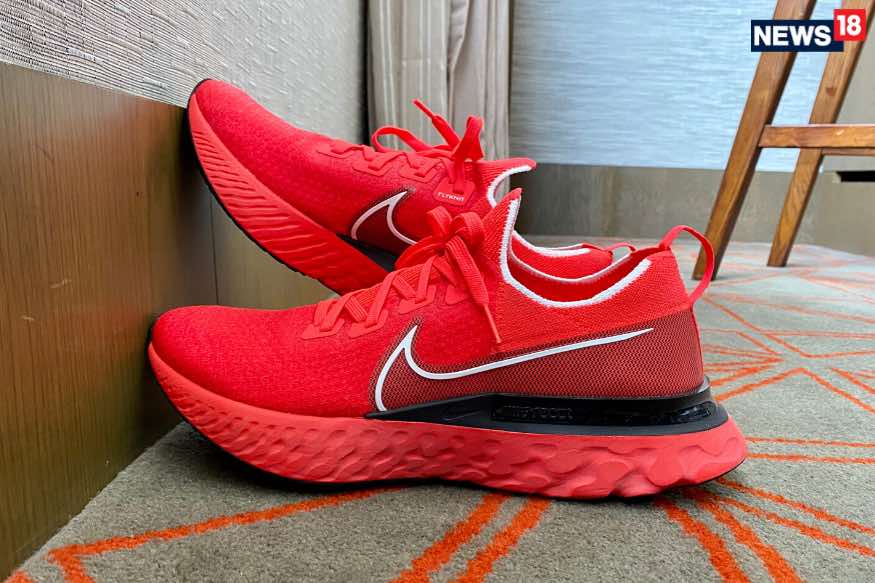 Nike isn’t one of those companies that would hide behind dodgy internal studies or some such thing. In fact, for the React Infinity Run shoe, Nike commissioned a study through the British Columbia Sports Medicine Research Foundation comparing it with one of their own shoes, the Structure 22. This included runners following a 12-week variable training program which finished with a half marathon. The results showed that the Nike React Infinity Run registered a 52% lower injury rate compared to the Nike Structure 22 shoe. The study included 226 men and women, and an injury was defined as missing three or more consecutive runs due to running related pain. Nike says the study found that 30.3% of Nike Air Zoom Structure 22 runners experienced an injury, while only 14.5% of Nike React Infinity Run runners suffered a similar an injury.

It is not hard to notice the updated rocker design too. The shape of the outsole is such that you can do a heel to toe rocking motion while standing still. But that’s not what its really meant for. While running, as the foot lands on the ground, the rolling transition forward becomes that much quicker. Nike had dabbled with this to an extent, indicated by the extended to in the likes of the Air Zoom Pegasus Turbo, but this is the first time the rocker has been fully deployed. It is all about reducing the stress on your foot, making you use up less energy and every little bit of that counts.

The upper is made of what Nike calls the Flyknit Loft. This is an evolution of the Flyknit upper we have seen for a large part of the last decade. This time around, there are three layers of breathable mesh wrapped around your upper foot. It is quite breathable, sits lightly on your foot and yet provides a snug feel. The lacing eyelets are plastic inserts, though I would have preferred a bit more cushion beneath them—but that could just be the bone structure in my left foot. Speaking of aesthetics, this looks brilliant from all sides. Particularly in this beautiful red colour. Show me one Adidas Boost shoe that looks this visually appealing, though chances are you will not be able to. 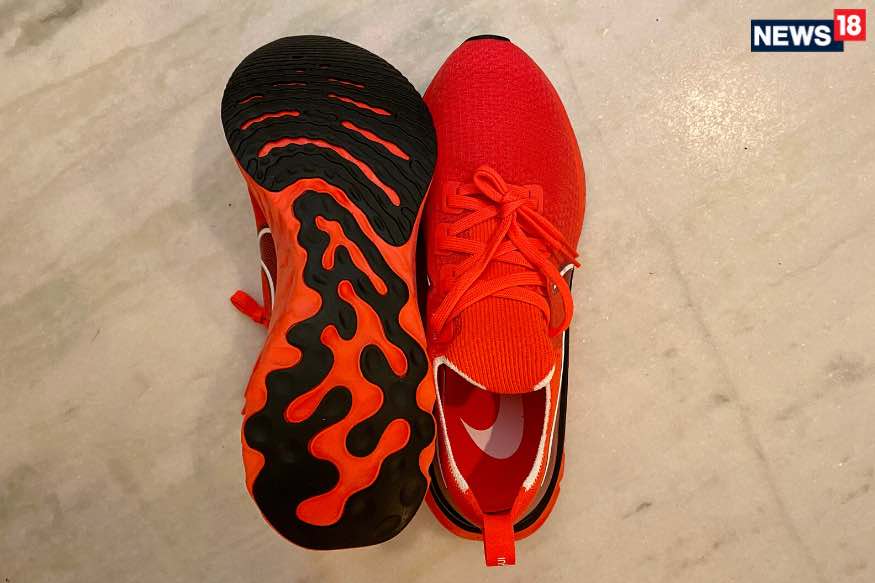 This is as grippy as outsoles get (Image: Vishal Mathur / News18)

The Nike React Infinity Run is great to wear for long durations too. I usually never take off my shoes in an aircraft, and that meant 12 hours straight of wearing these did not usher in any sort of discomfort, pain or the feet heating up. Talk about running, and the generous ventilation on offer here really keeps the feet cool. Hard surfaces or the slightly softer ones, it makes no difference whatsoever because the extra foam layer and the React foam’s inherent suppleness characteristics simply let you glide across. There is great traction and a very perceptible push forward. When you are simply ambling about in the Nike React Infinity Run, the React foam feels very cushy, in fact erring on the side of extra suppleness. Yet it becomes just a tad stiffer once you start running. It’s a bit like how the steering on cars weighs up at higher speeds—it is just pure smartness. The React Infinity Run weighs around 291 grams, which is lesser than the 309 grams or so the Adidas Ultraboost 20 tip the scales at. Take your pick—I like my shoes to be comfortable, and lesser weight is an important link in that chain.

Nike has designed the React Infinity Run for daily runs, and that is where this running shoe absolutely excels. And that might just be exactly what most potential buyers would need. The rocker shape assists in foot transitions, the React foam is comfortable yet bouncy, the wider toe box allows for more room and there is more grippy outsole for you to work with. For marathons and races, you might still want to switch to a Nike Zoom Fly 3 with the carbon fiber plate in the midsole providing the extra propulsion. But the rest of the time, the Nike React Infinity Run is exactly the running shoe you need. It doesn’t need you to pay with cash plus some of your organs. And saves you from injuries that runners tend to get from time to time. That assurance simply adds to the confidence.
Tags