Home » News » Tech » Nokia 8.1 Review: A True Android Flagship Killer, at a Time When There Are None
6-MIN READ

Nokia 8.1 Review: A True Android Flagship Killer, at a Time When There Are None

There really are no arguments against the Nokia 8.1 as it stands—top notch design, slick performance and now a good camera as well to go with the rest. The price is its strongest point.

When the Nokia 7 Plus arrived earlier this year, it did become the smart choice if you wanted a consistent smartphone for around Rs25,000. The new Nokia 8.1 is now on the scene, and unlike what the name suggests, this isn’t the successor to the Nokia 8 Sirocco—instead it is an even more powerful evolution of the Nokia 7 Plus. The Nokia 8.1 is priced at Rs26,999. Yes, it is an improvement in every single way too, over the phones it succeeds. Right then. For all the evolution that the Nokia 8.1 brings to the table, it is perhaps the timing which is spot on. The flagship killer space is now vacant, ever since OnePlus decided to up its ambition. That puts the Nokia 8.1 in a prime position to take over, and perhaps hold with an iron grip, the mantle of a ‘flagship killer’ Android phone.

A breath of fresh visual brilliance

It is quite good to see how Nokia has now pretty much standardized the design across its smartphone line-up. The Nokia 8.1 looks and feels like a Nokia phone, and that is a good thing. However, that doesn’t mean a sea of sameness welcomes you as you hold up the Nokia 8.1 smartphone. This is made of a single block of the Series 6000 aluminum, and then got a dash of the glass treatment too. With the flat side spines, the glass at the back and the dash of metal on the sides, the Nokia 8.1 is clearly a gorgeous phone to look at—and certainly better than the phones that the Chinese brands such as Oppo and Vivo chuck our way off a conveyor belt. The power key and the volume rockers also have a very nice tactile feel to them. The spine above and below the display is very slightly beveled on the near side, with a lighter colour finish on it. At times, you may feel that the paint is chipping off, but that is just the light reflecting off at different angles. On the back, the glass adds a very generous helping of premium-ness as you hold the phone. However, this does catch fingerprints very easily. But the bigger worry for us was the fact that this phone can be quite slippery, and that too if you keep it on a very smooth surface with the Nokia 8.1 set to vibrate when the phone rings—well, you get the picture. 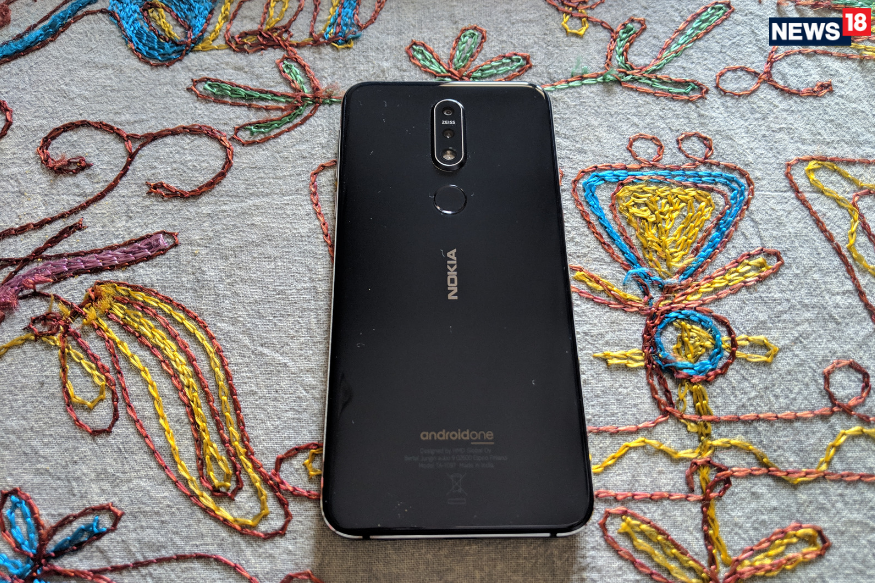 In comparison with the phone it succeeds, the Nokia 8.1 is less tall than the Nokia 7 Plus, because of notch cutout that adds space for components such as the front camera—these may have otherwise taken up space on the bezel, making it thicker.

In terms of the colour choice, what you can choose between is a Blue/Silver and Iron/Steel colour combinations. The latter is simply unique to look at and carry around, while the former makes you feel like you are using a black phone, till light shines off the back panel. It is good to have a phone with a large 6.18-inch display feel quite so compact at the same time.

The best display in this space, by far

Speaking of which, the 6.18-inch display (2280 x 1080 resolution) is one of the best that you will find in the sub Rs30,000 price range. Nokia calls this PureDisplay, but the fact is, this is pretty much an LCD display. It is bright, sharp, colours look vibrant without being unnatural and this works well outdoors under bright sunlight too. In fact, this display is HDR10 compatible, which is great news if you wish to fire up streaming services such as Netflix and Amazon Video on this. You could perhaps nitpick that the black levels don’t look the purest black, but the positive is that this doesn’t negatively impact the other colours.

Prepare to be surprised

The Nokia 8.1 is one of the first phones to be powered by the Qualcomm Snapdragon 710 processor. This is a new processor designed by Qualcomm on the 10-nanometer architecture, for exactly this segment of phones and retains a lot of similarities with the current flagship chip, the Snapdragon 845. There are six efficiency cores and two performance cores, much like the Snapdragon 845. There is no doubt that the performance is a significant improvement over the Snapdragon 660 (the processor which phone makers would have been forced to choose, if not for the Snapdragon 710). In terms of the real-world performance, the Nokia 8.1 pretty much handles games, multi-tasking and apps with absolute ease. This doesn’t slow down, and there is no sluggishness that kicks in if you leave a dozen apps open in the background—the same would not have been possible with the Snapdragon 660.

What also helps is the clean operating system that you get to build on. The Nokia 8.1, much like its siblings, eschews the benefits of Google’s Android One program. This means, you get the newest Android 9 Pie running out of the box, with a completely clean slate and no third-party apps or unnecessary customizations cluttering up the look. The only real customizations that you will interface with are in the camera app—manual controls as well as the addition of options including ‘Bothie’ selfies and live-streaming on social media apps.

The 3,500mAh battery easily lasts a day and a half as a primary phone for hectic days at work. This is pretty much at par with expectation, also helped by the fact that the clean Android that runs on this phone doesn’t have extra features that may also use up the battery. Some of the recent Nokia phones, despite their brilliance in other facets of performance, didn’t really hit the sweet spot when it came to photography prowess. That is also because cameras in smartphones across price points has been improving significantly and even the slightest of inconsistencies by any camera tend to stand out more than ever before. This time around, the Nokia 8.1 gets it all spot on. What you get on the back are 12-megapixel and 13-megapixel dual cameras. The former has the f/1.8 aperture, 1.4-micron pixel size and now has the new Spectra 250 image processing hardware backing it. The result is that the photos are significantly better than most Nokia phones in the recent memory have managed. With the secondary 13-megapixel sensor pulling in depth information, the photos that emerge after you tap the shutter button are significantly better than what you may have imagined. Daytime and good light photos look vibrant, rich and well detailed. There is good dynamic range too, and you don’t notice any loss of details around the frames. Low light photos are better too, compared with the Nokia 7.1 Plus, because this now handles light better than before.

What really stands out is that the image processing doesn’t aggressively sharpen or attempt to reduce noise in images, which gives you all the flexibility to get the desired effect while editing these shots yourself.

With a price tag of Rs26,999 slapped on it, the Nokia 8.1 puts itself in a winning position. There really are no arguments against this phone—top notch design, slick performance and now a good camera as well to go with the rest. If you don’t want to splurge on a flagship Android phone which may otherwise cost significantly more, this should really be your pick. Nokia is ending the year on a bang, and this is currently the best phone this side of the Rs30,000 price point.

Also Read | Samsung Galaxy A9 Review: Are Quad Cameras in a Phone Really Better Than Triple or Dual Cameras?