News18» News»Tech»OnePlus 5 Review: Can It Beat the iPhone 7 Plus Dual Camera?
7-MIN READ

OnePlus 5 Review: Can It Beat the iPhone 7 Plus Dual Camera?

OnePlus 5 was the most anticipated launch of the year 2017 from the Chinese tech company OnePlus. After the global unveiling on 20th June OnePlus launched the OnePlus 5 in India just two days after on 22nd June. We have had the phone for quite some time now and here's what we think about the much awaited OnePlus 5.

OnePlus 5 was the most anticipated launch of the year 2017 from the Chinese tech company OnePlus. After the global unveiling on June 20, OnePlus launched the OnePlus 5 in India just two days after on June 22. We have had the phone for quite some time now and here's what we think about the much awaited OnePlus 5.

The OnePlus 5, unlike the OnePlus 3T, is slimmer and lighter. The OnePlus 5 has dimensions of 154.2 X 74.1 X 7.25mm, that makes the phone quite handy and easy to pocket. It's lightweight too at 153 grams. The anodised aluminium body is way curvier than what you saw on the OnePlus 3T. Both Midnight Black and Slate Gray colours on OnePlus 5 give a very sophisticated and premium feel to this device. The OnePlus 5 is easily the best looking OnePlus device till date. But many would say that it resembles a lot to the Apple iPhone, which to a certain extent is true as well.

We all know that the OnePlus 5 now comes with a dual camera module. The horizontal setup of the OnePlus 5's camera also makes a substantial amount of camera bump at the back and that's one reason that you'll be wanting to buy a cover for this smartphone.

The firepower that this device has is something that flagships will have a hard time dealing with. Sure, OnePlus 5 could not be the first smartphone in India to pack a Qualcomm Snapdragon 835 SoC (We all know, Sony Xperia XZ Premium and HTC U11 beat OnePlus 5 to the race), but the OnePlus 5 packs in a 6GB RAM and now an 8GB RAM power for you to run plenty of apps in the background without worrying about draining memory on your smartphone. The CPU is clocked at 2.45 GHz and try throwing any challenge to this device and it will deliver.

The OnePlus 5 becomes the first device to launch with 8GB RAM variant in India, and that is the one to buy of firepower is what you are looking for in your next smartphone. There is also an Andreno 540 GPU on the device that will satisfy most of your graphic intensive needs and gaming. 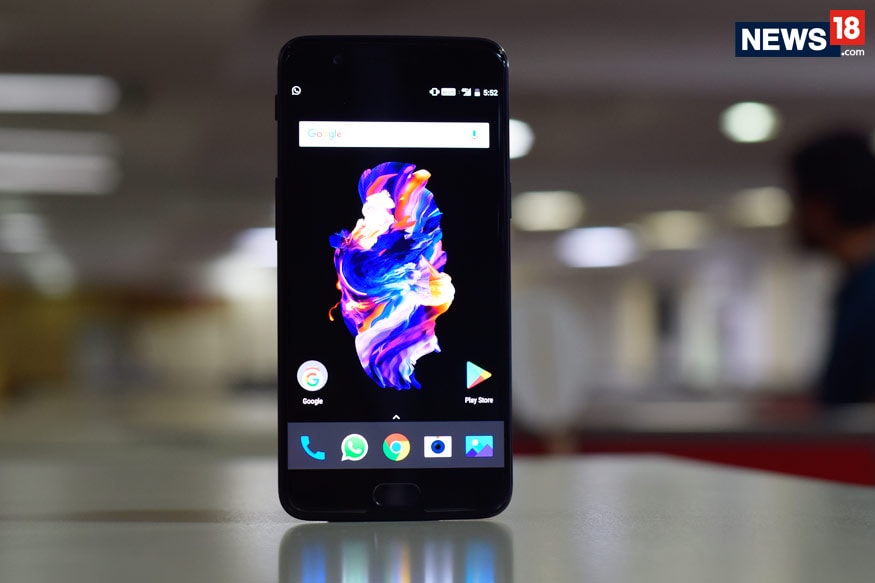 The OnePlus 5 still runs on the company's Oxygen OS that's on top of Android 7.1.1 Nougat. The user experience is kept very close to a stock Android experience and the device is easy to navigate. For people looking to upgrade from a sub-Rs 20,000 smartphone to a flagship device, this is the phone to have. The OnePlus 5 also comes with NFC support and Bluetooth 5.0. The OnePlus 5 though comes with 100 mAh less battery power than the OnePlus 3T, its 3,300 mAh battery lasts you easily a day and a half and that's also because of the display (We'll get to that part in a bit). It comes with DASH charging that gives you a day's power is just a little over 30 minutes o charging. The 5V, 4A charger that comes with the box of this device is also more powerful than the previous DASH charger's seen by the company.

The fingerprint sensor on the OnePlus 5 is at the front bottom of the device and works like a charm.

One of the main reasons for making the OnePlus 5 was to improve on the camera front. A camera module on a phone can make or break the phone in terms of sales figures and popularity in today's day and age. OnePlus 3T or the OnePlus 3 had average camera modules. The company had also realised this shortcoming. But they have tried experimenting with the OnePlus 5. With a growing demand of dual-cameras on a smartphone post-Apple iPhone 7 Plus launch last year, OnePlus 5 now gets a dual-camera module. 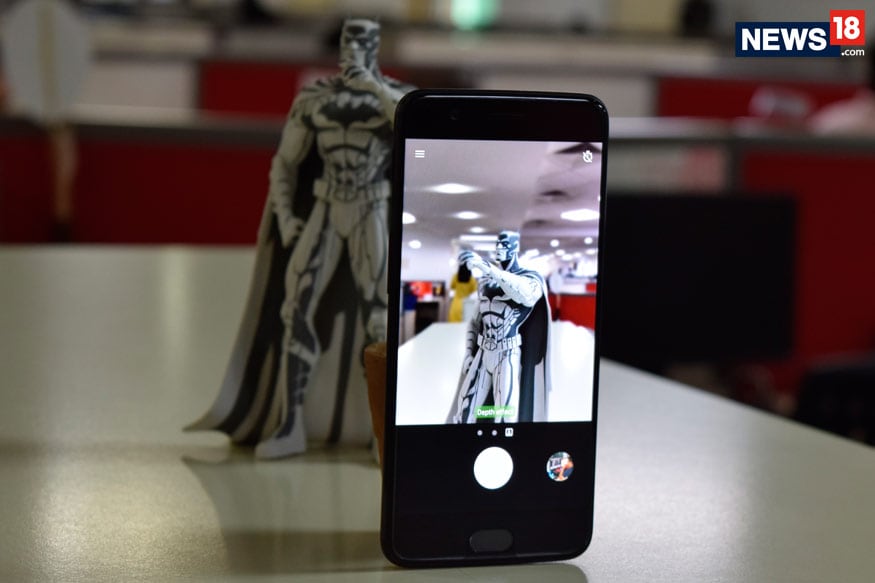 For starters, it's possible now to click portrait mode images with Bokeh effect with this smartphone. So you won't need an iPhone 7 Plus to do it. The camera is also capable of shooting 4K videos at 30fps, 1080p videos at 60fps and 30fps. Along with that you can also capture slow-motion video at 720p/ 120fps and make some time-lapse videos as well. The image quality of the OnePlus 5 is far better than what you saw with the OnePlus 3T. If you are a OnePlus user already you'll be left in awe of the image capturing capabilities of this phone. The pro-mode also gives the user full control over camera capabilities of the OnePlus 5. But, there are a few things that we would have liked on the OnePlus 5 as well. Like an option to edit images on the go, a few filters and easy taps for choosing modes on the camera app. That's something that still missing from OnePlus devices. There are still a lot of taps and swipes before you manage to select the mode and click an image. The Bokeh effect is also choppy at times, you really have to make an effort to click that portrait image. Remember Apple also launched the Depth Effect mode in Beta. The software magic that happens to click that perfect bokeh effect portrait is still better on the iPhone 7 Plus and even the Huawei P10. OnePlus 5 will need some updates in future to fix that problem. Though, selfie lovers will love the front 16-megapixel camera that comes with f/2/0 and a Sony IMX 371 sensor on the OnePlus 5. It's simple and non-gimmicky. The front camera is far better than what Gionee's, Oppo's and Vivo's of the world are offering you right now.

OnePlus 5 is a near perfect device for a spec hungry country like India. But, it still comes with a 5.5-inch full HD display with 401 ppi pixel density. The cover glass is a 2.5D Corning Gorilla Glass 5, but the AMOLED display at only 1920 X1080 pixels might be a let down for a few. 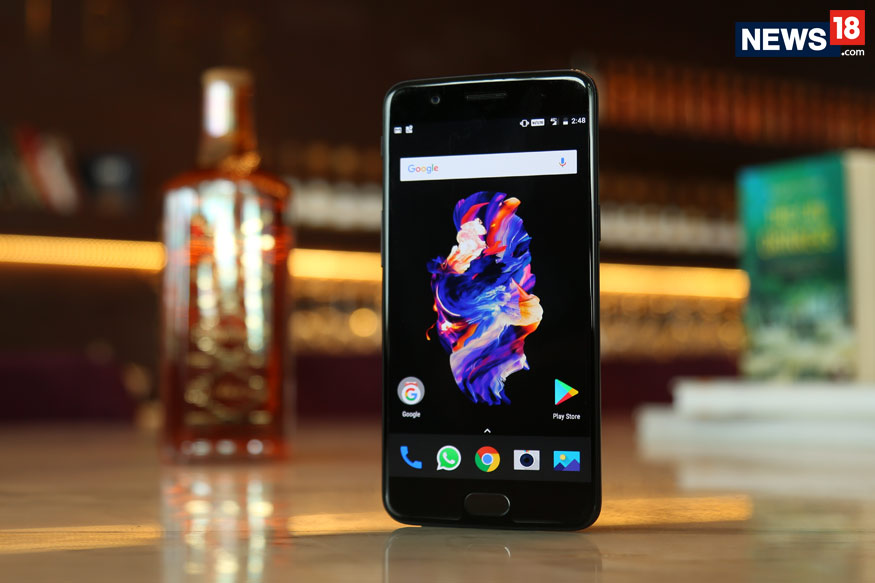 The reason we think to keep the display still at only Full HD where the world is moving to 2K and 4K displays is to keep the battery in check. The 3,300 mAh battery is able to last you a day and a half on this device is because the display does not draw much power from it.

We would argue that a full HD display is also good enough for a smartphone as the real estate on offer is not more that 6-inches anyways, but companies like Samsung and Sony have changed the perceptions of users so much that they would have wanted at least a 2K display.

The biggest question with the OnePlus 5 is its capability to make flagship phones from Apple and Samsung tremble with fear. The OnePlus 3T had what it took to be the best phone in 2016-2017. The OnePlus 5 might struggle a bit to carve a niche for itself. And we say that as it's also the most expensive OnePlus device till date. OnePlus fans would love it, others might take some time to warm up to it. 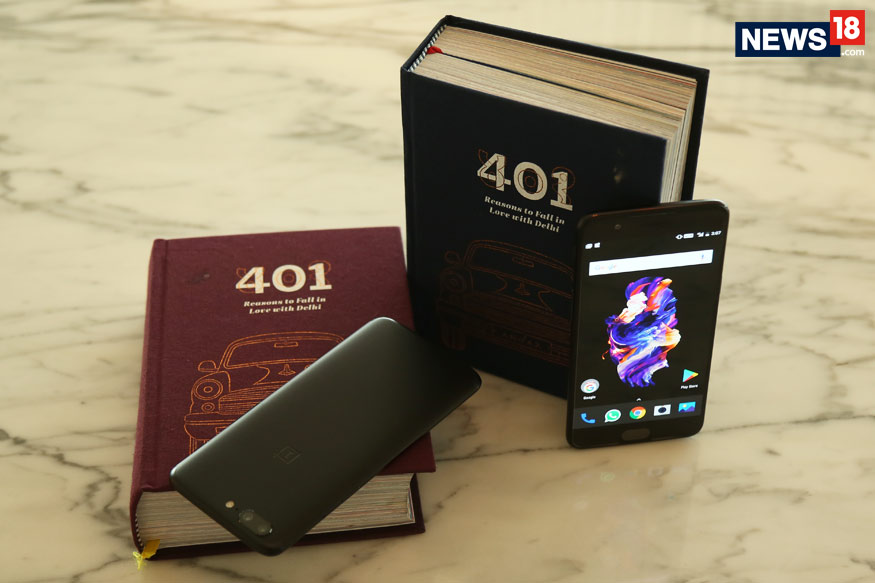 OnePlus knows what they are doing and history has been witness to what this companies capabilities are. Just a few software glitches won't stop them to succeed and they do listen to their community a lot. So even if you buy a OnePlus 5 now, rest assured that the camera software problems will be fixed.

OnePlus 5 is still a flagship killer and can be the next value for money flagship phone that everyone was looking for.