OnePlus 6T Review: The Android Flagship to Buy, if You Don't Want to Pay Flagship Prices

The OnePlus 6 is a great phone to own, and the subtle changes make the OnePlus 6T better in many ways. The familiarity could just be a positive too.

Vishal Mathur
There are flagship Android phones. Then there are Android phones positioned as flagship killers. And then there are the phones that start out in life as flagship killers, but eventually make the transformation to a flagship themselves quite successfully. Successfully, being the operative sentiment. If anyone has done it well, it has to be OnePlus. The journey started out many years ago with the OnePlus One, positioned as the proposition that cost much lesser than flagship phones (and it did) and yet offered the same top-notch performance and usability (which it did too). Over the years, OnePlus has pushed the price barrier with subsequent phones. With the OnePlus 6T, the transformation is complete. The trepidation, the careful first steps, weighing up the competition, learning along the way—all that has been done. This is as good a flagship phone as it gets, and it still costs lesser than a lot of flagship Android phones. The OnePlus 6T is available in India in four variants. There is the entry spec 8GB RAM + 128GB storage variant in Mirror Black, which is priced at Rs37,999. Then there are the 8GB RAM + 128GB storage variants in Midnight Black and Mirror Black colour options, priced at Rs41,999. The top-spec variant has 8GB RAM + 256GB storage, available in only the Midnight Black colour option, and is priced at Rs45,999. But just how good is the OnePlus 6T really?

There is that conflict of emotions as you hold the OnePlus 6T. It feels petite, the shine adds a nice luster and you want to be very gentle with it. Yet, this is a very well-built phone, it won’t slip out of your hand, and isn’t going to get scratched easily only to then run around throwing a fit. This is a very slim phone, and fits very easily in the hand, even though it is 0.4mm thicker than its predecessor. There is a slight arc on the back panel, which goes with the way your hand will curve when trying to hold the phone. The mix of glass and metal blends well together, giving the OnePlus 6T a very sophisticated yet youthful persona. It weighs 185 grams but doesn’t feel like it. It feels lighter to hold. The Mirror Black finish is the shinier of the two Black colour options you can choose from (the matte Midnight Black being the other one). It is tremendous fun to see light reflect off it in unique contoured lines and angles (OnePlus refers to this as the horizon line), but for someone who is a bit finicky about keeping things spotless clean, the easy accumulation of fingerprints isn’t going to help with the stress levels. This isn’t entirely different from the shiny black finish on one of the variants of the predecessor, the OnePlus 6, and it is good to see OnePlus retain this design element. That said, while the company insists that the OnePlus 6T is water resistant, the phone doesn't have an official "IP" rating, something that OnePlus suggests would have driven the price tag further skywards. 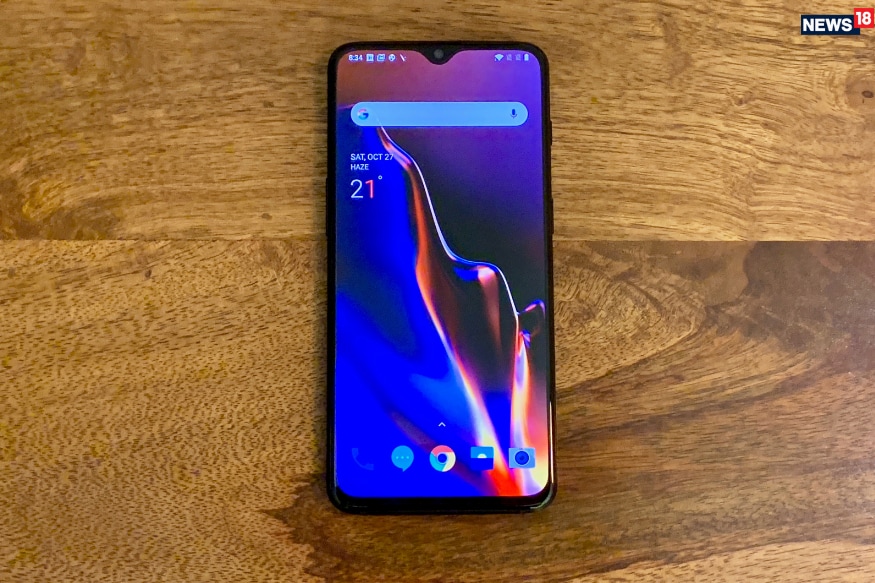 A lot has changed in terms of the display. The 6.41-inch Optic AMOLED display is the largest ever in a OnePlus phone. This packs in the 2,340 x 1,080 resolution, 402 pixels per inch and has the tall 19.5:9 aspect ratio. It is hard to ignore the redesigned notch at the top of the display, which now has the teardrop design instead of the longer and wider cutout earlier. The biggest advantage is that it takes up much lesser space on the notification bar, and visually looks significantly improved too. That said, the entire appeal of the display actually comes through in earnest when you view a variety of content on this. The colours are balanced without either being too rich or too subdued, which makes this great for watching photos and videos on. The sharpness levels are adequate, which means reading becomes a comfortable activity. OnePlus themselves have offered a lot of tweaks and options in the display settings. First up, there is the screen calibration option that lets you switch between sRGB, DCI-P3, Adaptive Mode and Custom Colour mode—depends on which one you prefer. Then there is the addition of the Night Mode which reduces the blue light emissions by the display to reduce eye strain—this is handy if you are looking at the screen in a dimly lit room or just before you are about to hit the bed. If you will be reading a lot on the phone, there is the Reading Mode which turns off all the colour from the display, and text is significantly better to read on a monochrome screen.

Under the hood runs the Qualcomm Snapdragon 845 processor. Depending on the version you pick, you will have this paired with 6GB or 8GB RAM. That is flagship-esque grunt to power the apps that you use and the games that you may play on the phone. What really helps is that the storage (irrespective of whether it is the 128GB or the 256GB variant) is the very fast UFS 2.1 type, which is significantly faster when it comes to data read and write speeds—that gives the OnePlus 6T a significant advantage over most of its rivals. We have already seen the benefits in the OnePlus 6, and faster storage is a tad more ignored in smartphones with the processor upgrades getting most attention. All said and done, the smoothness as you swipe around the interface or inside apps, the snappy response that you get when switching between apps and the cleanliness of the app drawer with no unnecessary third-party apps being preloaded on it, just makes for a very good smartphone usage experience. 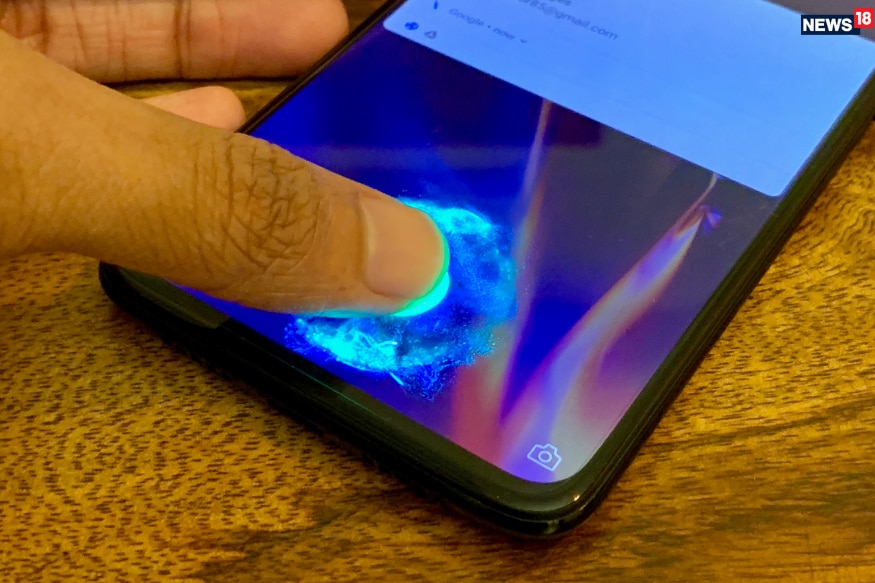 This is also the first OnePlus phone to have integrated the fingerprint sensor within the display. The zone lights up in a futuristic manner, indicating where you need to tap on the display to register the fingerprint and unlock the phone. The animation as you press down your finger on the screen makes you look at it again and again. We suspect you will simply lock the phone to unlock it with your fingerprint and watch the animation at play. The fun bit aside, the responsiveness of the fingerprint sensor is okay at most times, but we did notice occasionally that it doesn’t register a fingerprint when it is placed at a slight angle. The sensitivity could be improved with a software update—no big issue, and we have seen Vivo do that successfully in the past with the NEX.

The face detection system works flawlessly in good light and unlocks the screen in a fraction of a second. However, it still stumbles if there is a light source directly behind you, of if you are not directly in front of the front facing camera.

A lot of the OnePlus 6T’s brilliance comes from the OxygenOS 9. The 9 signifies the relation with Android 9 Pie, which the 6T runs out of the box. The new Android itself brings to the table a lot of refinements in terms of performance, better battery life and security. OnePlus adds to that with the refreshed OxygenOS. While this doesn’t look very different from the one on the OnePlus 6, there are subtle changes across the board which make it look better. Additionally, OnePlus has added the Gaming Mode. This will be handy if you wish to do a spot of Alphalt 9: Legends (Free on the Play Store; optional in-game purchases). Basically, Gaming Mode Gaming Mode can be used to reduce or completely blocking incoming notifications from apps on the phone, locks the screen brightness levels so that any changes in ambient lighting don’t distract you from the game and also ensures that the Wi-Fi or 3G/4G data priority is given to the game that may require additional downloads over any other apps that may also want to use data on the phone.

We are still sitting the fence on the issue of the navigation gestures. The way this works is, that you have the option of removing the navigation bar at the bottom of the screen, and instead get used to swiping upwards from different parts of the screen. Yes, the advantage is that you get more screen space to play with, but also at the same time, you need to get used to the specific gestures for going back to the previous screen, closing an app, opening the task manager or returning to the home screen. That is a steeper learning curve than we initially imagined. On the OnePlus 6, we kept the navigation bar in its place. And we will do the same with the OnePlus 6T as well, at least for the time being.

Over the years, OnePlus phones’ camera have threatened excellency, but always fell short of greatness by just that little bit. Not to say that they were bad in any way, but rivals always did that little bit more which had avid photographers and pretend photographers all worked up. Things could be changing with the OnePlus 6T. This time around, OnePlus have teamed up with Irish conceptual artist Kevin Abosch, who has well known works in photography. The focus for this partnership has been to improve the image processing algorithms so that they are able to recognize human faces better (useful for portrait photography in particular), better exposure and light handling in different scenes and how to keep the detailing spot on in complex photos. 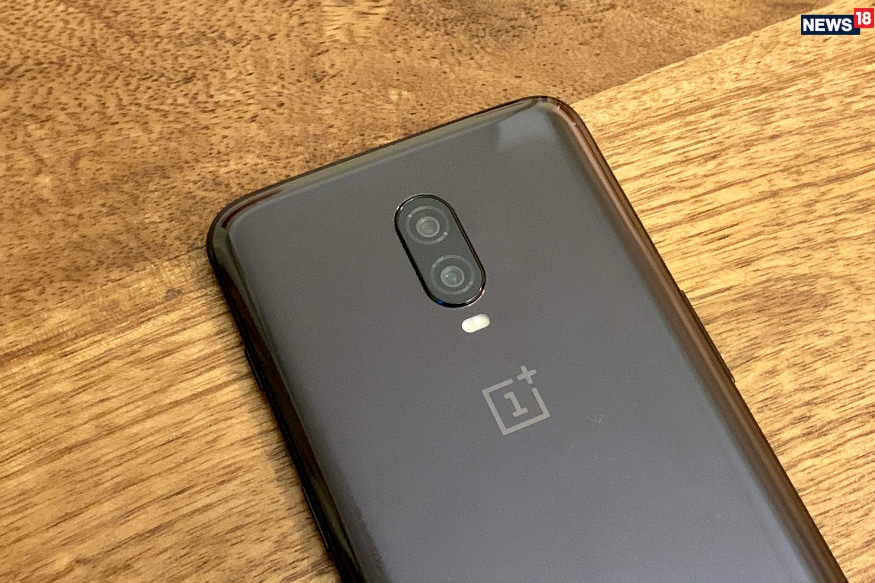 In terms of the optical hardware at play here, there is a 16-megapixel (Sony IMX 519 sensor) camera paired with a 20-megapixel (Sony IMX 376K) secondary camera. The former has an aperture of f/1.7 and a pixel size of 1.22 microns, while the latter has an aperture of f/1.7 and each pixel is 1.0 micron. The immediately result, and we may attribute it to the Abosch partnership, is that low light photos are significantly sharper, more detailed and accurate than ever before. There are no soft edges visible, and the noise is very well restrained. That makes this one of the better cameras to have in low-light environments. Switch to daytime photos, and the detailing, contrast as well as colours look well in place.

Over the past couple of years, every phone that OnePlus has made has indeed been incrementally better than the previous one it makes. That can be traced back from the time the OnePlus 3T succeeded the OnePlus 3—which was already a very good phone at the time. This unflinching consistency has paid dividends here too. The OnePlus 6 was already a great phone to own, and the subtle changes make the OnePlus 6T even better in many respects—the foremost being the new Android on board, and the improved camera. The thing is, if you have already invested in a OnePlus 6, you really don’t need to rush to buy the 6T. But for anyone else looking for a genuine upgrade over their existing phone, this is ticking off all the boxes.