OnePlus 9R Review: This Android Phone Is Flawless And You Better Believe It

That’s more like the OnePlus phones from the not too recent past, the likes of the OnePlus 6T and the OnePlus 7, to name a few. And more like the pricing that a lot of existing OnePlus owners looking to upgrade, would really appreciate. And the OnePlus 9R is also carrying on with tradition on the spec sheet. Do not for even a second think of the OnePlus 9R as some sort of “Lite” phone or a comparatively stripped-down to the basics OnePlus 9. In fact, this plays the spec sheet very strongly, which is very much a OnePlus way of doing things. Underneath the hood is the Qualcomm Snapdragon 870 processor, which the company insists is optimized for gaming on the OnePlus 9R. Your choices are between 8GB RAM and 12GB RAM, and in both avatars, I’d not really fret about the 8GB RAM option if that’s all your budget allows at this time—it’ll be very powerful and very much future proof too. The OnePlus 9R line-up is pretty simple. Two variants, as we have already illustrated, and two colour options to choose from. The Carbon Black would be for those who prefer familiarity and don’t really want to upset the balance of colours in their life. My pick however would most certainly be Lake Blue, the colour you see pictured here. 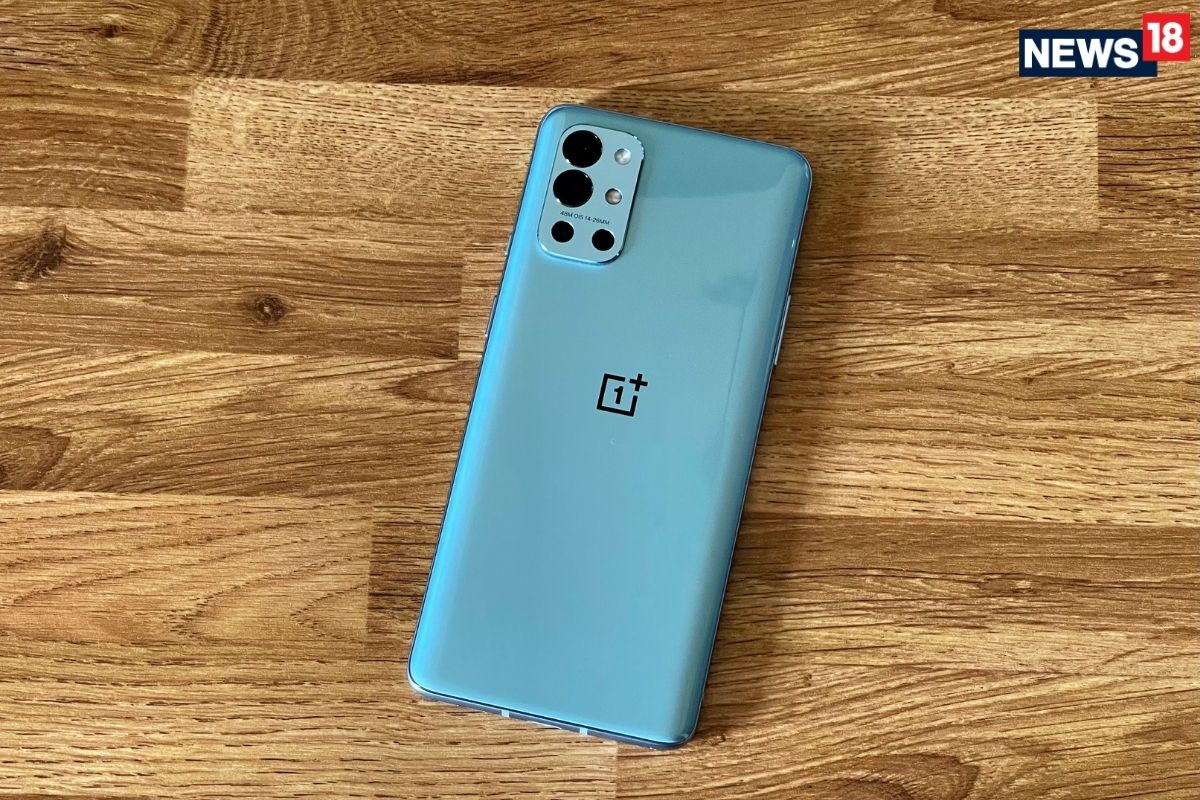 Design is, to say the least, beautiful. This is very much a mix of glass and metal, unlike the polycarbonate with a glass-like finish which the Qualcomm Snapdragon 870 powered version of the Samsung Galaxy S20 FE gets. Both have their advantages and disadvantages, mind you, but OnePlus is really making the choice simpler for those who prefer glass on their back of their phones and metal on the frame. The OnePlus 9R gets Corning Gorilla Glass at the back too and I have to say that the Lake Blue colour in particular does a pretty good job of not letting fingerprints and smudges show up as much as I honestly expected. The OnePlus 9R tips the scales at 189 grams. Hold this in your hand, and you get the distinct feeling that this is a well-built and premium phone. The OnePlus consistencies continue. Every time I use a OnePlus phone, I end up admiring the Alert Slider which continues to be the highlight—it is incredibly simple to switch the phone from Ring to Vibrate to Silent, depending on what you need, by simply using this physical key. No other Android phone seems to think this is important enough to integrate, but believe me, you’ll get used to this in a jiffy and then miss this on every other Android phone. It is incredibly simple. You slide the toggle without having to unlock the phone, great if you are about to start driving or stepping into a meeting, and don’t want to be disturbed. Mind you, this doesn’t get any IP ratings for water and dust resistance.

The 6.55-inch display is impressive, not just for the sort of vibrancy it offers, but also for the fact that it is the smallest among the three OnePlus 9 phones and yet you never feel a bit more screen space would have been better. At least I didn’t, while browsing web pages, catching up on some reading on the Kindle app, whiling away time on Twitter or even editing some photos. This has a resolution of 2400 x 1800 pixels and supports the 120Hz refresh rate which is now becoming par for the course with smartphones. All put together, this is what OnePlus calls the Fluid Display. It’s incredibly bright and quite vivid too, the latter you can of course control with the colour settings in the menu. Like the more expensive siblings, this also has more brightness points which means automatic brightness changes are smoother and less noticeable. Colours look really sophisticated—my favorite has to be the Display P3 calibration settings, because I like this subdued vibrancy of colours the most. This screen doesn’t have the Comfort Tone option from the OnePlus 9 Pro, which basically alters the colours on the screen to match your ambient lighting, to reduce eye strain. Yet, the screen doesn’t look out of place either—you don’t make that jarring transition from warm light around you to a comparatively cool colour tone display, for instance. 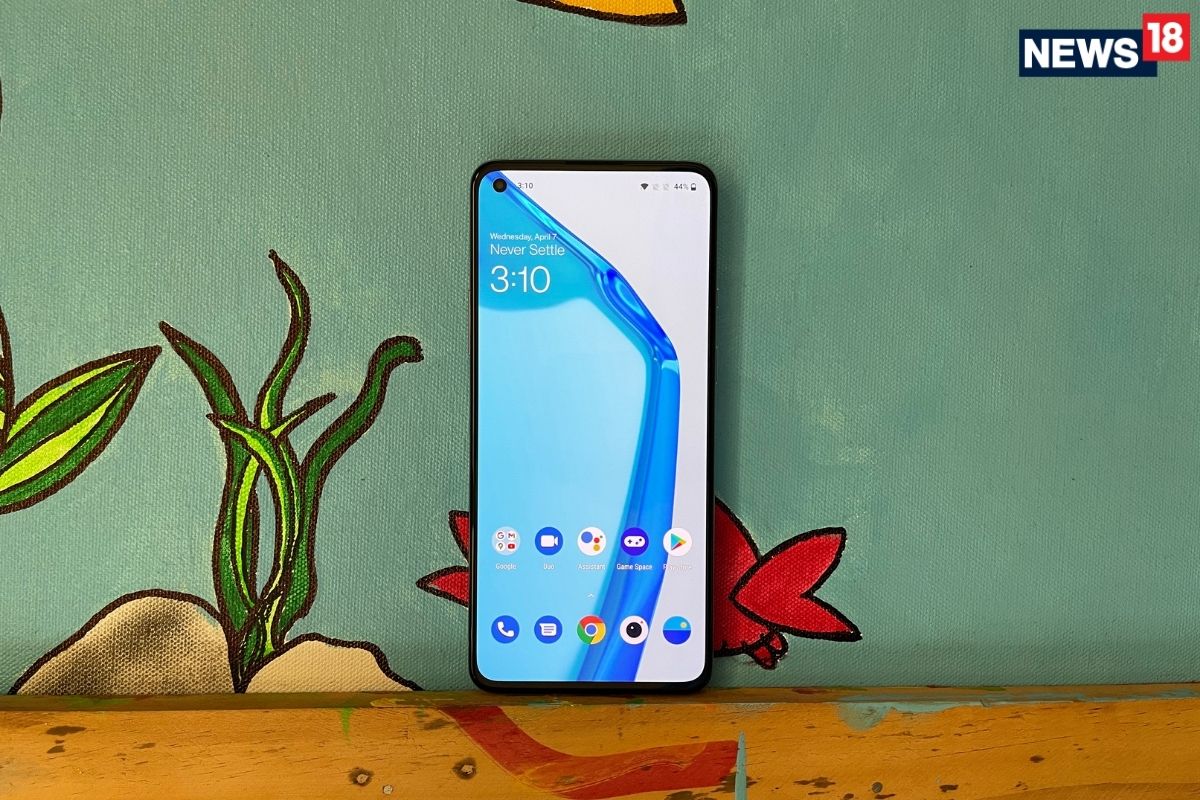 Powering the OnePlus 9R is the Qualcomm Snapdragon 870 chip. The chip maker claims this is as much as around 12.6% faster than the predecessor. Your RAM options are 8GB and 12GB and depending on which you pick, you’ll get 128GB and 256GB storage. You should be fairly well stocked on the futureproofing aspect even with 8GB RAM, as I have already mentioned, while 12GB gives you that much more bandwidth headroom if you really intend to do heavy multitasking or gaming on the OnePlus 9R. Yes, the 12GB RAM option available for a bit more money, and if it is at all possible, by all means do stretch that extra and get more RAM. Hard to argue with that. What also helps the OnePlus 9R along the way is the really fast UFS 3.1 storage standard, which offers really fast data read and write speeds, all of which translates into really slick app performance. Then there is the TurboBoost 3.0 feature, which uses RAM compression and using the fast storage as virtual RAM to give you more space to leave more apps open in the background. For starters, you anyway have fantastic amounts of performance headroom available, whether it is 8GB RAM or 12GB RAM. But this gives you that layer of certainty that the system knows when to step in, if need be. There is a lot of focus on gaming as well, with features such as the 240Hz touch sampling rate, the Pro Gaming Mode that cuts out the distractions and the annoying notifications and also takes advantage of the Dolby Atmos audio. A spot of gaming with F1 Racing downloaded from the Play Store, and the OnePlus 9R exhibited the very slightest levels of tepidness on the back panel, a far cry from the really warm back panels that a lot of other phones end up with in the smallest window while gaming. OxygenOS remains incredibly intuitive to use, is silky smooth and just looks easy on the eye as well. There is no real visual change compared to last few iterations of OxygenOS, and that is great because this is already the cleanest and best-looking Android customization, this side of pure Android itself. It has been all about subtle tweaks and improvements for a while, and that evolution strategy is working quite well. The fonts, the layout and the generously left white spaces (or black spaces if you are in dark mode) really do put a smile on the face. It has similar niggles that I had also observed with the OnePlus 9 Pro. For instance, in the Gallery app, there is still no option for auto enhance editing—a lot of users prefer that, and it is something that flagship phones do tend to have. Also, when cropping an image using the edit tools in the Gallery, the borders are so thick that you can’t really make a fine adjustment with crops unless you’re really lucky. Yet, Oxygen OS in the OnePlus 9R does solve the Gboard and Microsoft Edge issue that I had pointed out with the OnePlus 9 Pro and the OnePlus 9—this phone does not exhibit the same delay in responsiveness of the keyboard when invoked within the Edge browser.

The OnePlus 9R has the Warp Charge 65 charging tech, while the OnePlus 9 and the OnePlus 9 Pro have the even faster Warp Charge 65T. Nevertheless, this is mighty fast too. Look at these numbers—fully discharged to 58% in around 15 minutes and fully discharged to 100% in 39 minutes. That’s just 10 minutes more than the Warp Charge 65T. In a nutshell, you won’t be left waiting around for the 4500mAh battery to charge. No wireless charging support, as perhaps to be expected, and that isn’t a shortcoming in my book. It is good to have the wireless charging option, but not a dealbreaker if it isn’t on the menu. Cameras are a pretty interesting proposition on the OnePlus 9R. You get a 48-megapixel Sony IMX586 wide sensor, a 16-megapixel Sony IMX481 ultra-wide sensor, a 5-megapixel macro lens and a 2-megapixel monochrome camera. This quad camera setup, at least on paper, really flexes its muscles, even though there isn’t the Hasselblad branding on this one. Yet, I must say from the outset that the OnePlus 9R’s photography experience, as it stands now even before an Oxygen OS update or a camera performance optimizing update has been rolled out, is surprisingly good. Out of the box performance wasn’t the strong point of OnePlus cameras, often over the years, but that’s changed for the better. Daytime and good light photos are extremely well detailed, and I really like the sharpness that’s on display. It isn’t overdone or dialed down to hide any other shortcomings, because there are none that are visible. Colours pop up nicely, without actually popping out unnaturally. Frames are crisp and details aren’t lost in the shadows. Yet, it is the low light performance that I have been most impressed with. Without the Nightscape mode, the OnePlus 9R picked out and nicely illuminated low light photos, with genuinely good colours and no distortion or noise. The same frame in Nightscape of course made things even more brilliant. But the real surprise has to be the fact that without the night mode and in 2X optical zoom, there was absolutely no loss of detailing or colour accuracy. My takeaway for the OnePlus 9R camera is that while there isn’t a direct Hasselblad involvement with this camera setup, the learnings from elsewhere are making the difference where it really matters. The only niggle I noticed with the OnePlus 9R’s cameras is when zooming in and out while recording videos—it isn’t as smooth as it should be and is often visible as we view the video file again.

The OnePlus 9R is impressive, extremely impressive, in every which way possible. I tried hard, but it was nigh impossible to point out any real flaws with the OnePlus 9R. I really didn’t find any deal breakers whatsoever. It looks really cool, feels premium to hold and use even though it is the most affordable OnePlus 9 series phone, performance is top notch and befits a flagship-level experience that is promised, robust battery life with fast charging and cameras that deliver really good photos in all lighting conditions. There has almost always been a really competent OnePlus phone under the Rs 40,000 price point to choose from, and the OnePlus 9R delivers on that too, just about.