OnePlus Band Review: This Spices Up Boring Fitness Bands Just That Little, Which Is A Lot

The OnePlus Band is priced at Rs 2,499 and that pegs it straight into battle against the Xiaomi Mi Smart Band 5, also priced at Rs 2,499. There are many more fitness band options too, but not all are as good as they should be.

It may have taken its own sweet time, but OnePlus now finally has a fitness band in its product line-up in India. In a way, the OnePlus Band as we see it now is the first of what is expected to be a new line of wearables that may include a smartwatch at one point. It is priced at Rs 2,499 and that pegs it straight into battle against the Xiaomi Mi Smart Band 5, also priced at Rs 2,499. A fitness band makes sense, particularly for OnePlus as the first step into the wearables space. First, the price. Affordability gives the OnePlus Band a much better chance of gaining eyeballs and subsequently consumers, than a smartwatch may have in the first go. And in due course of time, the consumer confidence will help a smartwatch—I’m not saying a smartwatch is on the way, but logically it should be in the pipeline.

Let us look at some of the highlights of the OnePlus Band, as far as the experience and the spec sheet is concerned. The OnePlus Band can do continuous monitor the blood oxygen saturation (SpO2), sleep tracking, long battery life and multiple band colour choices, including black, Navy and Tangerine Gray. It really is as simple as it should be, no complications with setting this up and you will have the OnePlus Health app on your phone. At this time, the OnePlus Health app is available on the Google Play Store for Android phones, but it doesn’t seem to be listed on the App Store for the Apple iPhones just yet. That is expected to change very soon. 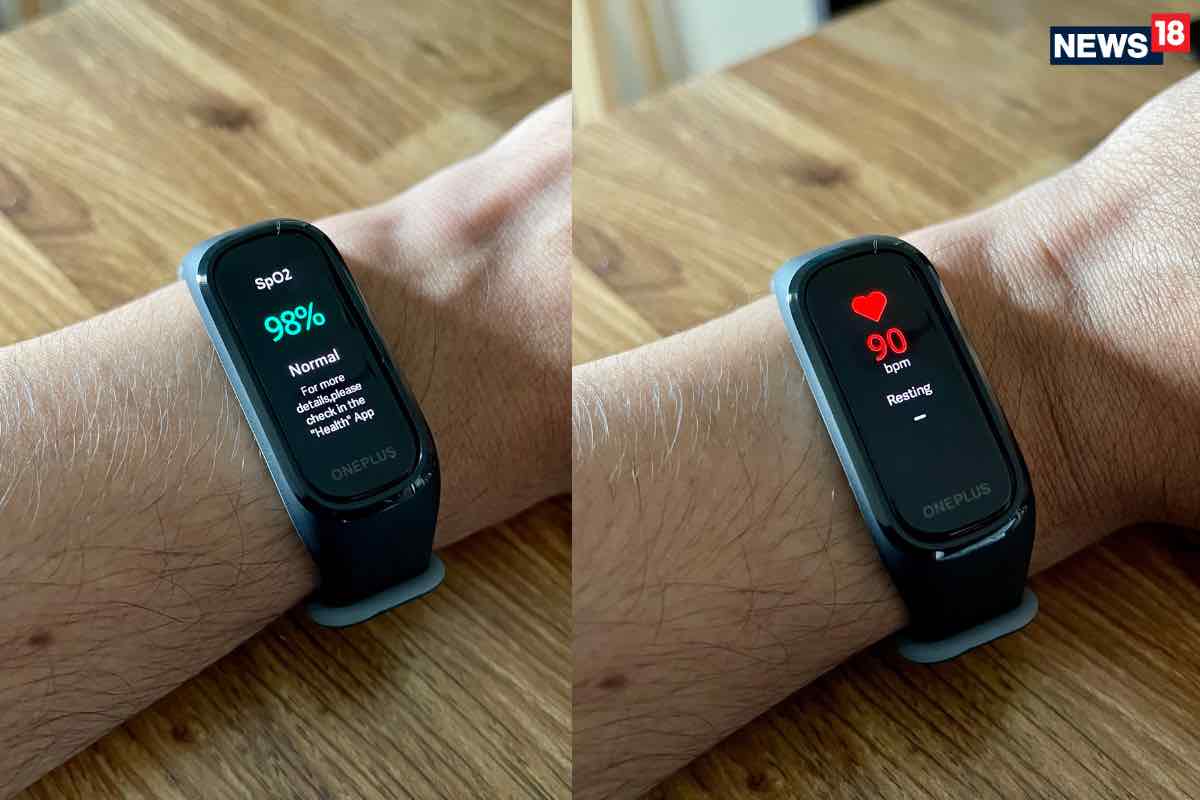 In terms of the design, the OnePlus Band is as conventional as one would expect it to be. Each OnePlus Band strap is made of a mix of TPU and aluminum alloys, and weights just around 12 grams. There are no physical buttons or keys on the band module itself. You need to pop it out of the band for charging. The touchscreen lets you navigate the interface, which itself is simple and you wouldn’t ever get lost in there. The OnePlus Band sits easily on the wrist and you can find utility for it at any point during the 24 hours of the day—keeping track of the time, monitoring your activity, keeping tabs on your heart rate and SpO2, and also monitoring how well you sleep at night. I find it extremely uncomfortable to wear anything on my wrist while sleeping, but if you are okay with it, this is one of the most affordable trackers that you can buy.

Setting up and pairing the band is simple enough. You’ll need to plug it in with the charger for the first time once you take it out of the box, to power up. Once it is paired (it’s the Bluetooth Low Energy 5.0 standard), which takes less than a minute, you’ll need to enter your data—age, gender etc. You can choose to allow phone notifications on the OnePlus Band, but well, why not. The setup also asks you if you’ll be wearing this on the left wrist or the right wrist, which will tell the tracking algorithms exactly what they need to optimize to get the correct fitness tracking data. 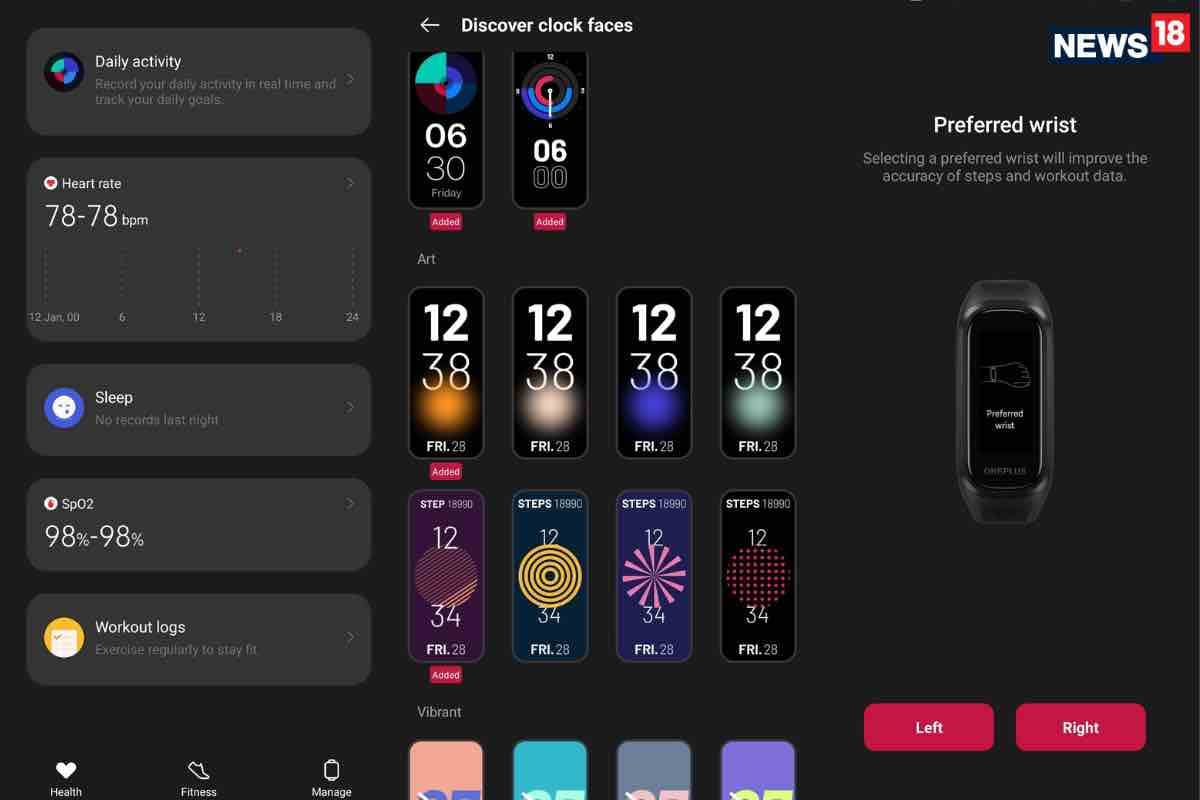 The OnePlus Band has preloaded functionality, which the OnePlus Health refers to as apps. These aren’t exactly the apps you may be imagining, and you cannot install apps on the OnePlus Band. What is preloaded includes Daily Activity, Workouts, Heart Rate, SpO2, Sleep, breathing, Weather, Tools and Messages. You can turn whichever ones you don’t need, to off. This will reduce the number of swipes you’ll have to do on the OnePlus Band’s screen later to get to the option you need at the time. You will be able to select which apps from your phone can send you notifications on the OnePlus Band, and which cannot.

It takes about 10-15 seconds for the data to sync between the band and the OnePlus Health app—noticed this while manually taking heart rate and blood oxygen readings. Mind you, both these readings are within the range of what the Apple Watch tells me, at around the same time. That is a huge positive for the OnePlus Band, and the sensors that are in use.

The 1.1-inch AMOLED display (294 x 126 resolution) ticks the boxes for usability, touch response and visibility across usage scenarios. There are horizontal and vertical swipe gestures to let you use the functionality. There are a bunch of watch faces too (or would we call them band faces?) that can add some sparkle and colour. As you wish, you’ll be able to enable your phone’s notifications on the OnePlus Band. At a time when fitness bands are pretty much matching each other in terms of functionality, fitness tracking and smartphone notification replication, the OnePlus Band does that in a rather uncomplicated way.

OnePlus says the OnePlus Band has a battery life of 14 days. It’s a 100mAh battery, but everything seems optimized well enough. Looking at the discharge level of around 5% every day when kept on worn for the most part of the day with the heart rate sensor and the SpO2 logging happening at intervals, this will easily follow through on that claim. Do note though, I keep the display brightness at the lowest setting. Personally, I’m not a fan of having to pop out the band module to charge it. We really need to simplify that too. Every single time I have tried to click the module back in the band, have accidentally enabled something on the screen.

Fitness focused OnePlus Band users will really like some of the predefined exercise modes—these include cricket and badminton, which is quite unique. Almost every band has swimming, running, jogging, cycling etc., and the OnePlus Band ticks off that conventionality as well. Since the OnePlus Band is IP68 rated and can stay inside water up to a depth of 50 meters for up to 10 minutes, you’ll not really have to get stressed about the band getting submerged or drenched.

Fitness bands are uncomplicated, and often are the first tryst with a wearable for many users. The OnePlus Band surely has to be one of the slickest options out there right now, if not the best. It sticks to conventionality for the most part, but in true OnePlus fashion, simplifies things and just makes the experience more vivid too. The OnePlus Band ticks off the features list, the robust battery life and the affordable price. I would say the really neat app has to be one of the most important aspects of using the OnePlus Band. Competition is aplenty, but the OnePlus Band would be my pick. If I were to use a fitness band every day.