Home » News » Tech » OnePlus Buds Review: These Are For OnePlus Phones What Apple AirPods Are For An iPhone
9-MIN READ

OnePlus Buds Review: These Are For OnePlus Phones What Apple AirPods Are For An iPhone

OnePlus Buds have a price tag that reads Rs 4,990 which puts them in a good position to compete against the likes of the very capable Oppo Enco W31 and the Xiaomi Mi True Wireless Earphones 2 earbuds.

It is clear the wireless earbuds are now very much an integral part of any product ecosystem smartphone companies try to build around the phones they sell. You name a phone maker, and they have wireless earbuds that sit right next to their smartphone line-up, further quickening the uptake of true wireless music experiences. OnePlus, a bit late to get to the party (though being late to a tech party is often a sign of attempting perfection), is now joining the likes of Samsung, Xiaomi, Redmi, Oppo and Huawei who have already made their jump into the true wireless earbuds space. The OnePlus Buds, as they are called, are all about the experience, without getting distracted by the extras. That being said, it’ll help if you have a OnePlus phone too, to get the best out of these buds. 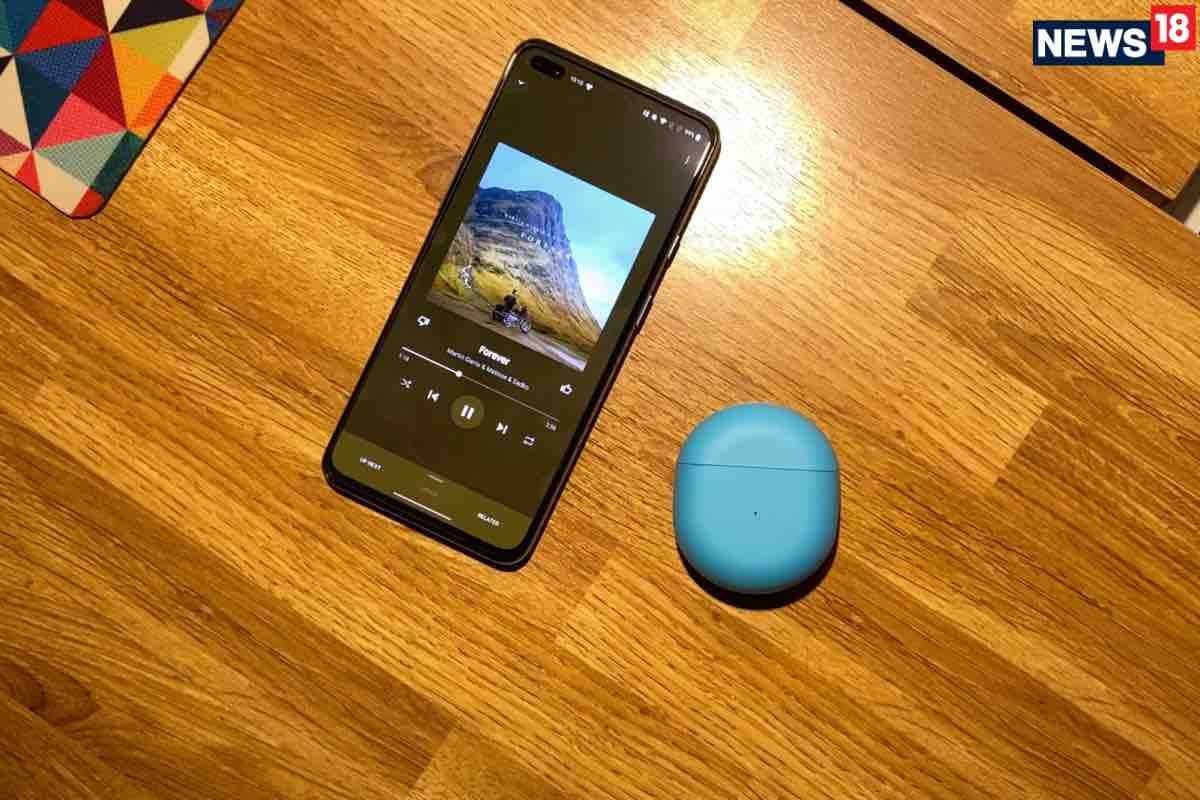 The charging case weighs just 37 grams and each OnePlus Buds earbud tips the scales at 4.7 grams. Quite light, the entire combination

This Is Sculpted Beautifully

As a first impression, the OnePlus Buds have what can only be described as an eye-catching personality. The brilliantly sculpted charging case, the Nord Blue colour and the simplicity yet the elegance of it all just comes together in a way that you want to hold it and discover it. You can also have these in white or grey colours, but if you have just put down some cash for a Blue Marble colour variant of the OnePlus Nord, you might want to pair it with the aptly named Nord Blue. The case is nicely rounded all through, which means it wouldn’t stand up at any point unless you prop it up against something.

The charging case weighs just 37 grams and each OnePlus Buds earbud tips the scales at 4.7 grams. Quite light, the entire combination. It’ll mostly be able to slide into the same trouser pocket as your phone too, and the finish has a nice soft touch which isn’t going to catch scratches easily. The case has a USB-C port, which means your OnePlus or pretty much any other Android phone’s charger will do the job of juicing this up as well. There is no wireless charging for the case however, and at this price, we really cannot be too demanding.

In terms of the ruggedness, the OnePlus Buds are IPX4 rated, which means these buds will have no problem with an accidental splash of water, sweat or even getting caught in a momentary shower as you run for cover.

Returns To The Basics, But That Brings Limitations

Take the OnePlus Buds out of the case and while the extended stem does resemble the Apple AirPods to a certain extent, the rest of the wireless earbuds design isn’t anything as close to AirPods as people are making it out to be. That being said, OnePlus is following the example set by the AirPods with the hard-plastic build for the buds. Unlike some of OnePlus’ own Bullets lineup of earphones, this doesn’t have silicon ear tips either. It is a one size fits all, and if you are lucky, it will fit you well. But if you aren’t, there isn’t much you can do to improve the fit, to be honest. For me, these were a bit of a change because pretty much all of the earbuds I have reviewed off late have had silicon ear tips, and my ears seemed to have gotten used to it. Nevertheless, it didn’t take long to get comfortable with the OnePlus Buds. These fit well in my ear, though I do keep getting the niggling feeling that the shape of my left ear canal is a bit off and that bud could pop out accidentally.

Whether you like in-ear earbuds and whether you prefer those with silicon ear tips or ones without totally depends on your ear structure, comfort preference and how well either fit. But, this design choice of the OnePlus Buds means there will be a lot of ambient noise to deal with when you are in a noisy environment—this fit isn’t exactly snug and can’t do that little extra to block out some bit of ambient noise. That is why the environmental noise cancellation feature becomes even more important. It uses the data from three microphones on each bud to analyze the noise around you and eliminate it. That will work well for the most part, but once you are able to step out and find yourself in a really noisy environment, some amount of the nearby din will still filter through. OnePlus Buds And OnePlus Phones: Love, Forever And Ever

You can also customize the double-tap functionality on each earbud of the OnePlus Buds, but again, that functionality is limited to OnePlus phones only. Last but not least is the functionality of firmware updates, which at the moment can only be downloaded and installed if the OnePlus Buds are paired with a OnePlus phone. That being said, the Fast Pair function is available for all Android phones, letting you set these up, get them paired and ready for music playback in a handful of seconds.

Work It A Bit, And The Sound Really Shows

There is a large 13.4mm audio driver in each ear, which is a solid hardware foundation for the sound to build on. The OnePlus Buds can go really loud and never compromise on clarity at any point. These are able to reproduce the smallest of details in a music track, also because the OnePlus Buds start out with a neutral sound signature that isn’t biased towards bass or vocals. The mids get their due attention as well, and you get a pretty wide sound. As things stand in the out-of-the-box setting, you may have to tweak the equalizer of the app that you use or the phone’s audio settings to get the bass pumping through. Once you do that, it really makes a difference.

Paired with a OnePlus phone that has Dolby Audio, this really shines through with vibrant and powerful sound. As it does on the OnePlus Nord with the Dirac Audio Tuner—you can specifically optimize the sound for the OnePlus Buds, something the previous OxygenOS had prepared the phone for. This is something other Android phones miss out on for a large part, but the flexibility to tweak the sound via the music streaming app always remains an option.

The OnePlus Buds could perhaps could have done with the double-tap gesture to enable a bass mode, the way the Oppo Enco W31 does it—music buffs would have found the convenience quite likeable.

For calls, I faced no issues with audio clarity, delays or disturbances. The other side on a call was also able to hear me clearly, though to be honest, the limitations of the world at this time mean I haven’t been able to try out the calling on OnePlus Buds in a somewhat noisy outdoor environment. Therefore, it is hard to comment whether you can genuinely use these for audio recordings either, in less than pristinely silent environments.

Battery Life Is As Good As It Gets

The runtime on each battery charge is quite robust, and that would be an understatement while at it. Each earbud has a 35mAh battery pack which lasts around 7 hours on a single charge for music playback. Those in itself would be more than adequate to get you through most flight journeys and the dull waiting times in airport terminals—once the world gets better, mind you. The charging case of the OnePlus Buds has a 430mAh battery which can extend the use time for the buds to 30 hours with regular top-ups when you aren’t using them. There is the fast charge option too, which OnePlus says extends the music listening time to 10 hours, buds and charging case top-ups combined.

Whichever way one looks at these numbers, the real-world performance is quite close to these claims. Which is always a good thing. In fact, I am someone who listens to 50% or lesser volume for most of my music, and the buds actually clocked more than 7 hours on a single charge before I had to put them back in the case for a charge up. This sort of performance definitely gives the OnePlus Buds a significant advantage over its immediate rivals, which returns significantly lesser battery runtime figures in comparison. And also most other buds in the same price range.

The Last Word: Everyone Is Invited, But OnePlus Phone Users Get Special Passes

For what is a first-generation device, a first attempt, OnePlus has given the OnePlus Buds just the right amount of oomph to get the conversation going. In terms of sound, they very much hit most of the right notes. Design of the case too. Earbuds, well, is more of a subjective matter. But the thing is, the OnePlus Buds are best enjoyed if you have a OnePlus phone sitting somewhere between the OnePlus 7 and the latest, the OnePlus Nord. It is that replication of an ecosystem that Apple managed with the AirPods, is what OnePlus is perhaps doing best. At this price, most OnePlus phone users wouldn’t mind betting on the true wireless earbuds experience. And that’s half the battle won.
About the Author
Vishal Mathur
Vishal Mathur is Associate Editor – Technology for News18. He’s written about personal technology for more than 12 years and is often seen on the News...Read More
Tags:
Read More