The OnePlus Watch is priced at Rs 14,999 and offers a really interesting smartwatch option for Android phone users, who don't have a genuinely good smartwatch to choose.

The OnePlus Watch is finally here. There is a lot of promise on display, there is a dollop of potential that is apparent and there’s that sense of a gamble too. Particularly with the timing. The OnePlus Watch comes alongside the latest and greatest smartphones OnePlus has made, the OnePlus 9, the OnePlus 9 Pro and indeed the OnePlus 9R. The ingredients seem to be very much in place—a design that looks good, there’s even a cobalt limited-edition version, lots of features packed in, works seamlessly with Android phones, the promise of long battery life and software that is a breath of fresh air. It took OnePlus a while to get into the smartwatch space. But before you brush this aside as what seem like an afterthought, I’d like to point out that the timing may just be ideal for OnePlus to launch the OnePlus Watch.

Let us look at the situation as it stands. For starters can now safely say that all those rumors of Google’s Wear OS resurrection have been greatly exaggerated. For Android phone users, that’s a pity in particular. All those promises, those claims, and all that potential has been for nothing. Yes, you may still find Wear OS smartwatches from brands such as Fossil or Mobvoi, but I wouldn’t recommend you spending your hard-earned money on any of those—and those don’t come cheap, mind you. Your only real smartwatch option then, in the truest sense of the term, was anything that Samsung offered as the Galaxy Watch line-up. Those don’t come cheap though, with the Samsung Galaxy Watch 3 priced around Rs 32,990 and the Galaxy Watch Active2 priced upwards of Rs 24,090. This neatly gets us to the OnePlus Watch. Going on sale first will be the OnePlus Watch in the Moonlight Silver and Midnight Black colour options. These are priced at Rs 14,999 which is a fair pinch lesser than Samsung’s smartwatches. The OnePlus Watch Cobalt Limited Edition will come in later. There is something really eye catching about the OnePlus Watch design. Mind you, it doesn’t have any shouty colours or racing stripes or a unique design. It is just that this smartwatch, in the Midnight Black colour option, looks really nice. There is no typical smartwatch bulk, no big buttons or dials protruding out and a really nice circular watch design that gives a brushed look to the frame around the display. This is a large watch mind you, because the OnePlus Watch only comes in the 46mm size. Yet, it will not exactly look or feel ungainly even on the thinner wrists. The watch is made of stainless steel and this particular variant gets the Fluro-elastomer strap—which is a fancier way of saying a strap that has a rubber feel and finish. The OnePlus Watch also feels much lighter than what I had initially imagined—it tips the scales at 76 grams and sits quite comfortably around the wrist without getting in the way. It is a really restrained design yet one that has enough modern touches and visual elements to make the OnePlus Watch look sophisticated. The OnePlus Watch is IP68 water and dust resistant, which means you can take it swimming.

Speaking of the Fluro-elastomer strap, OnePlus bundles just one size strap with the OnePlus Watch. For my thinner wrists, I got just about lucky with the very last groove in use to secure the watch. Any thinner, and the watch would have been impossible to wear. Yet, the OnePlus Watch is still loose enough to slide around my wrist in case I stretch my arm above my head—there is no way to get just that little extra tighter fit, which would have given me the perfect wrist fit with the OnePlus Watch. Maybe this is something for OnePlus to consider for users who may come across this issue too. And it’s a bit perplexing, because I have never had a strap size issue with any smartwatch that I have ever used till now. In the midst of this perplexity, I have to note that the strap themselves have a nice set of grooves running the length. This is a nice change from the flat straps that are standard with a lot of smartwatches.

The software on the OnePlus Watch seems pretty special, simply because of the simplicity there is while still including a whole bunch of features. It’s a proprietary software, OnePlus Watch OS, and for what is essentially version one with updates expected in the coming months, it still makes for a fine first impression. Enough watch faces for you to play with, a very neatly laid out app drawer and detailed settings without anything getting too complex. There are hints of Wear OS at times, particularly with the swipe gestures to pull in other menus and screens while on the watch face. One of the really cool features, for instance, is that the OnePlus Watch can let you control your OnePlus TV and can even detect when you sleep and turn off the TV for you. I really like the ability to control the TV functionality from the wrist and not have to bother with a remote that eventually manages to hide itself when you need it the most. Yet, it did take some attempts to get it connected with my trusty OnePlus TV—the issue being the TV needed a firmware update. I haven’t yet tried out the auto switch-off feature, because wearing a smartwatch to bed isn’t something I find entire comfortable. Though that is purely subjective.

If wellness tracking is something you intend to let your smartwatch do for you, the OnePlus Watch is in a good place to deliver on that. This can check and monitor for heart rate and any possible ranges and variations, has a blood oxygen monitor which is often an indicator of some illness, stress level detection, sleep tracker and an air pressure sensor. The blood oxygen ratings, at least for my readings, were very similar to a pulse oximeter that takes the readings from the finger—it was within a range of 1% and matched the readings on the Apple Watch Series 6. The heart rate variation readings will notify you if it detects unnatural fluctuations. What really helps you make sense of these readings and numbers is the updated and significantly redone OnePlus Health app for Android phones, which now has a much more intuitive layout than before, and actually feels like a natural companion app for a watch as slick as this. You can pull data by day, week and month, and everything is nicely segregated. That being said, it often took a bit of time for the OnePlus Watch data to get synced to the app, and a manual refresh of the app’s home screen often solved the delay. 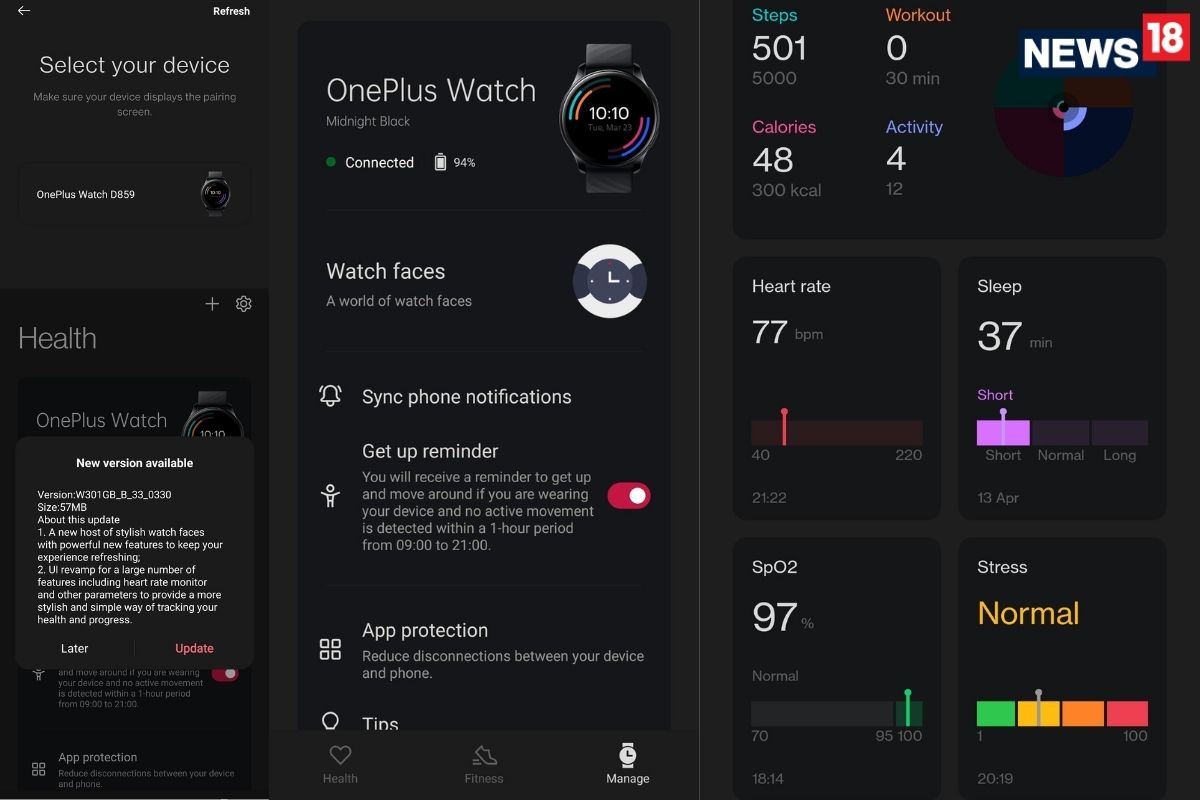 Weirdly enough, after the first firmware update that installed soon after the setup, the OnePlus Watch switched to Hindi from the English language that was set earlier. If you come across that too, there isn’t any option but to carefully navigate the settings menu and land up on the language option and change it to English.

Battery life claims are pretty robust with the OnePlus Watch. The battery should last around 14 days for most users when used for a mix of tasks such as daily wear, sleep tracking or routine daytime wear. That’ll come down though if you enable sleep blood oxygen monitoring. I haven’t had the watch for enough time to be able to fully drain the battery over a period of close to 14 days, but noticing a daily battery discharge of around 9%, which should allow the watch to last around 10 days on a single charge. This by no means is an absolute figure, and an estimate based on the time I have used the watch for.

The 1.39-inch AMOLED display does really well visually. Colours look nice, it is bright and there is enough real estate for text to be intelligible. This does well with auto brightness, with smooth transitions across the brightness range. There is no always-on display available with the OnePlus Watch at this time. While raise wrist to wake almost always illuminates the screen, I did notice at times that attempting to tap on the screen to wake it up, doesn’t always get the job done. Secondly, and I’m not sure if I’m missing something here—I didn’t find an option to set a time of around 2 minutes or 5 minutes to let the screen be on after you’ve tapped it or raised the wrist to wake it up.

The thing with the OnePlus Watch is that it is instantly likeable. The design, the software, the features in store and of course the comparatively more affordable price tag. The long battery life, detailed fitness tracking promise and nifty features such as the ability to control some functionality of your OnePlus TV, add value. For a smartwatch and if you aren’t demanding the world from it, this just works. At least yet. There is a lot of promise too, with a lot more expected from the upcoming software updates. Yet, there is that unshakeable feeling that the OnePlus Watch does miss out on a few things—more accessory and strap options at launch time, no support for any third-part apps or the popular apps that you may use on your phone, no always-on display and no integration with any voice assistants such as Amazon Alexa or Google Assistant. And you only get this in one size, which might not be to everyone’s liking or comfort. All said and done, the OnePlus Watch has entered a smartwatch market that offers a lot for Android phone users but mysteriously also doesn’t offer a lot when you actually get down to buying a smartwatch. As a watch that is smart, the OnePlus Watch gets you the basics nicely ticked off. It is the extra set of value adds that still need some tweaking and tuning. The OnePlus Watch may feel like a first effort, but it is most definitely a very sophisticated first effort—totally depends on what you are demanding from it at that exact moment. It is a pity that the OnePlus Watch isn’t available for the Apple iPhone, just yet.