Optoma CinemaX P2 Review: I Used This 4K Projector And Now Going Back To A TV Is Proving Difficult

You pay a generous wad of cash for the brilliance that is the Optoma CinemaX P2, priced at Rs 4,99,999. Yet, if your home deserves this, you will end up with a massive smile on your face.

I have always had a non-comprising attitude with the entertainment setup I’d use regularly at home. It’s been this way, long before we arrived at this juncture of being locked in our homes due to the Coronavirus pandemic, and suddenly realizing the importance of TV and Netflix. No that’ll do TV, it had to be genuinely good, though could never afford a flagship. The best media streaming devices available–looking at you fondly, the WD TV family. And a mix of AV receivers and soundbars. Have dabbled with projectors too, often since reviewing projectors is very much part of what I do professionally. But more often than not, there were genuine limitations that often stopped me from using one full-time. Space needed, the heating issues, lack of good built-in audio and so on. Yet, my opinion about projectors has completely changed. All thanks to the Optoma CinemaX P2.

Be very aware that you do pay a generous wad of cash for the brilliance that is the Optoma CinemaX P2. This is priced at Rs 4,99,999 in India. Yet, if your home demands and deserves a projector, you could very well end up with a massive smile on your face after spending a lot of your precious money. Every time you watch sports, settle down for a movie or catch up on your favorite TV shows. Let me start with what is perhaps the smartest thing about the Optoma CinemaX P2 4K projector. And that is the audio. Speakers built into projectors isn’t exactly knew, yet it has rarely been done this well. They are very basic at best, and mind you, this is the case with even the most expensive of 4K projectors. These built-in speakers sound tinny at best and are completely useless at worst. Yet, the Optoma CinemaX P2 is a breath of fresh air. integrated within the projector, for all intents and purposes, is something akin to a soundbar. There are two full range audio drivers and two separate woofers, to match the promise of the video. The results are simply mighty impressive—this is the best sound I have ever heard in a projector, by far. And for once, don’t have to scramble to attach a separate soundbar or AV Receiver to the projector to get good sound to go with the large and brilliant visuals. That’s not all with the audio. The Optoma CinemaX P2 supports Dolby Audio formats as well. From my experience with the audio, the integrated speaker system is more than powerful enough to match a lot of the experience that many high-end TVs deliver with their built-in audio hardware. It all totals up to 40-watts of audio power. As the projector sits in place, the speakers face you, sitting behind a nice white fabric grille. When light falls on this at certain angles, you can actually see the speakers as they are placed. Vocals are clear, there is perceptible movement of sound if the scene demands it though the physical limitations are there, and you also hear just that much of bass to go with the overall sound signature that movies and TV shows don’t come across as incomplete. Push the volume really high and still it doesn’t become uncomfortably sharp at any point of time. You might compromise on clarity at high volumes if you try to cater to a large room, but for most living rooms and home theater rooms, this will be absolutely fantastic at the medium and medium-high volumes you’ll be keeping this at. Rarely do I ever start a projector review by praising the sound, and the Optoma CinemaX P2 is one of those rare instances.

The other really good thing about the Optoma CinemaX P2 4K projector is that this is ultra-short throw by design. With the projector sitting just a few inches away from the wall, we got image sizes as large as 90-inches without having to block a large part of the room and have a mess of wires and cables snaking along. Keep this a couple of feet away from the wall and you can go as high as 120-inches of projection size. Optoma has kept things really simple. In fact, a tad too simple. The projector simply demands that it be placed right for the visuals to project on your wall properly. There is no keystone or geometry correction option, and what you’ll need to do is align the projector to the right or the left, and also the vertical height to get the right projector size and the correct straight lines for the frame. It really doesn’t get simpler than this, though we would have liked some sort of additional options for managing the image line correctness. Simplicity doesn’t stop here. The projector just has the power button that you need to worry about. There are no further keys, dials or buttons that you need to bother with. The rest of the controls are on the remote, which is rechargeable by the way—a micro-USB cable is what you’ll need. There are three HDMI inputs as well as optical audio out if you still want to use another speaker, an ethernet port and USB ports for external storage devices. I tried the Optoma CinemaX P2 with the Amazon Fire TV Cube, the Amazon Fire TV Stick 4K and the Tata Sky Binge STB, and the projector played well with all of these sources without any hassles or glitches. 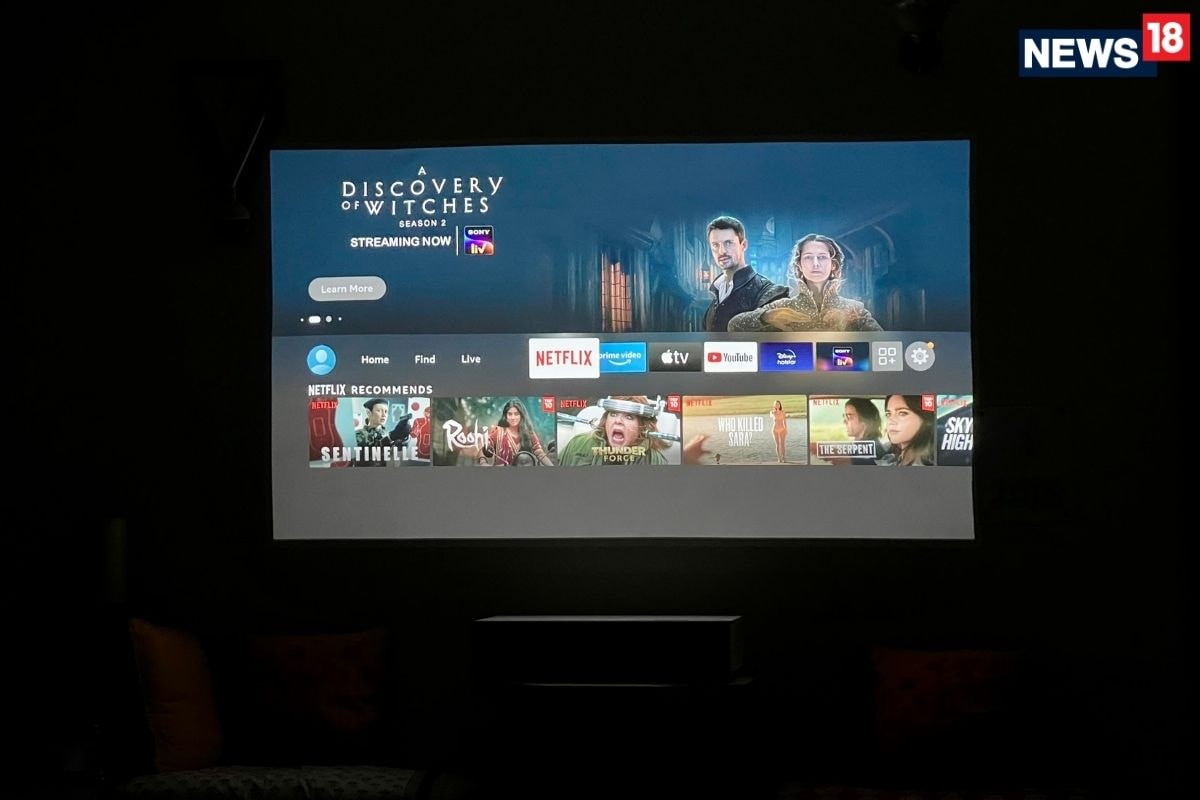 This is a smart projector too. It is Android at its foundations, though heavily skinned. You can get most of the popular video streaming apps directly on the projector, but for the best app experience, I’d recommend something like the Amazon Fire TV Stick 4K. That’ll allow you not just more up to date streaming apps, but also take advantage of under the hood optimizations for content and HDR, for instance. This is a 4K projector, as the name suggests, and it is perhaps to be expected that this really shows its true strengths with original 4K content. It was at a nascent stage a couple of years ago, but now, Netflix and Amazon Prime Video have a vast trove of 4K content in Dolby Vision and Dolby Atmos as well as HDR10. Now even Disney+ Hotstar is joining in on the 4K fun, and the good times are set to roll further still. The Optoma CinemaX P2 4K projector is essentially a lamp less laser light implementation, and the advantages of that are there from the outset. This delivers really vibrant colours, even if you turn off colour boosting, and they are separated well. This reproduces fairly deep blacks as well, that has a positive impact across the spectrum. They aren’t the deepest, but you will never be found complaining that the blacks don’t look deep enough. The projector also gets detailed picture quality settings, much like how you’d have on a high-end TV—but for some reason, the settings menu is fragmented a bit too much. But the detailed options are good, because you might feel the need to dial up the sharpness because it feels a tad softer at default settings. It is with HDR content that you’d notice no unnecessary brightness reduction, something that a lot of TVs and projectors still struggle with. I did have the pleasure of watching Formula 1 races and IPL cricket on the Optoma CinemaX P2 4K projector, and I have to say that the fast-moving visuals looks natural and motion handling is very slick, without any blurring or strain on the eyes, or unnatural smoothening, visible.

The Last Word: When A 4K Projector Is A Proper Deal

It isn’t often that I’d be found recommending a home entertainment projector to just about anyone, including those who may not have a separate home theater system to give it a rightful place at home. And most certainly, you’d not find me recommending a projector without actually saying that you should also get a nice audio system to go with it. The thing with the Optoma CinemaX P2 4K projector is that despite the price tag, this projector is versatile enough for homes that may not have the luxury of a separate home theater room. This will work brilliantly where your TV used to be. And the best part is, you won’t need to clutter up the looks with soundbars or speakers to go with it. This is a single unit experience, that delivers on the complete audio-visual demands. And mind you, for a projection size around 100-inches, you’d be paying significantly more for a TV of that size. And suddenly, the Optoma CinemaX P2 4K projector feels like a proper deal. Mind you, the smart projector will still work best with an Amazon Fire TV Cube or an Apple TV. For movie buffs and sports fans, who have enough clean white walls at home and a budget big enough, it most certainly is.