eFootball PES 2021 Season Update is incremental in nature, but the improvements are critical and has made the game ever so slightly better. We can only wish Konami did the same with its overall finesse as well.

PES 2021, or should we say, eFootball Pro Evolution Soccer 2021 Season Update, had such a circumstantial and matter-of-fact build-up to the release that I was not even very familiar with exactly what Konami was up to this year. About a week ahead, I came to learn why PES 2021 is called a ‘Season Update – because that is exactly what it is. Konami has channeled all of its energy and resources into a 2022 overhaul of the football video game, a genre that can almost definitely get repetitive even for the die-hard football fan. This year, then, we appear to be left with promises of improved football mechanics and a lower price tag. Its pricing actually is a big draw – on PC, PES 2021 costs Rs 800 (via Steam). On Xbox (via Games The Shop), it costs Rs 2,199, which really is nothing for a brand new (and also fairly popular) game.

The result, in most ways, is a positive one. At the end of the day, what keeps drawing thousands of football fans not unlike myself to these games is the promise of even more realistic football, and an ancillary experience that grows better with each passing year. While I’m still not convinced about PES 2021’s performance with the ancillary bits, there is one thing that the game gets very right this year – the pure football gameplay at the core of the game.

The real Ronaldo and Messi finally stands up

The refinements to PES 2021 Season Update come in the gameplay department, where the overall pace of the game is slower than before. Like in the real world, you have players taking time to eke out the perfect defence-splitting through ball. This allows you to do things like time the poaching striker’s run to perfection, or come out with an impeccably timed sliding tackle that takes your opponent out, gets the ball and sets you up for a counter attack.

Passes reflect a deeper connect to how footballers would actually play on the pitch. As a result, player turns are timed better, and don’t look or feel like they are morphed by algorithms. You also get tiny things like wingers making support runs inward as you approach the opponent’s box. Pacey full-backs can get in the extra yard and shower the box with dangerous crosses – once you nail a cross, it is unlikely that you will not score. It really is the passing build-up play that is extremely rewarding in PES 2021, because here, you get to see your player’s attributes in action. Launching counter-attacks like these is a joy. (Image: News18.com)

It is also this part of the game that really rewards your team’s best players. Have Cristiano Ronaldo in your team? He’s almost always likely to lay off a deft touch when you play quick, one-touch passing, and by the time you have a support player on the ball, you are likely to see Ronaldo lurking around in a scoring area, waiting for you to slip in a through or lob a cross over. Manchester United’s Paul Pogba plays like the footballer he has the potential to be, which means that he puts in a cantering, midfield-bossing shift every time you play with him. Thomas Mueller at Bayern Munich makes the ultimate false runs to throw your opponent defenders off their tracks. Lionel Messi will always look for space, and PES 2021 rewards you with much improved dribbling controls to use his strengths.

The authenticity is further heightened with how the players behave on the pitch. David de Gea has a habit of saving more with his feet, van Dijk will always stand his ground even during a counter-attacking wave, and all of this makes for a lot of fun. However, there are shortcomings here. The accurate passing play means that you now take longer to pinpoint your balls from the midfield, which in turn leaves you more vulnerable to being tackled, or in case of defending, mistiming your tackle and facing a completely needless yellow card. 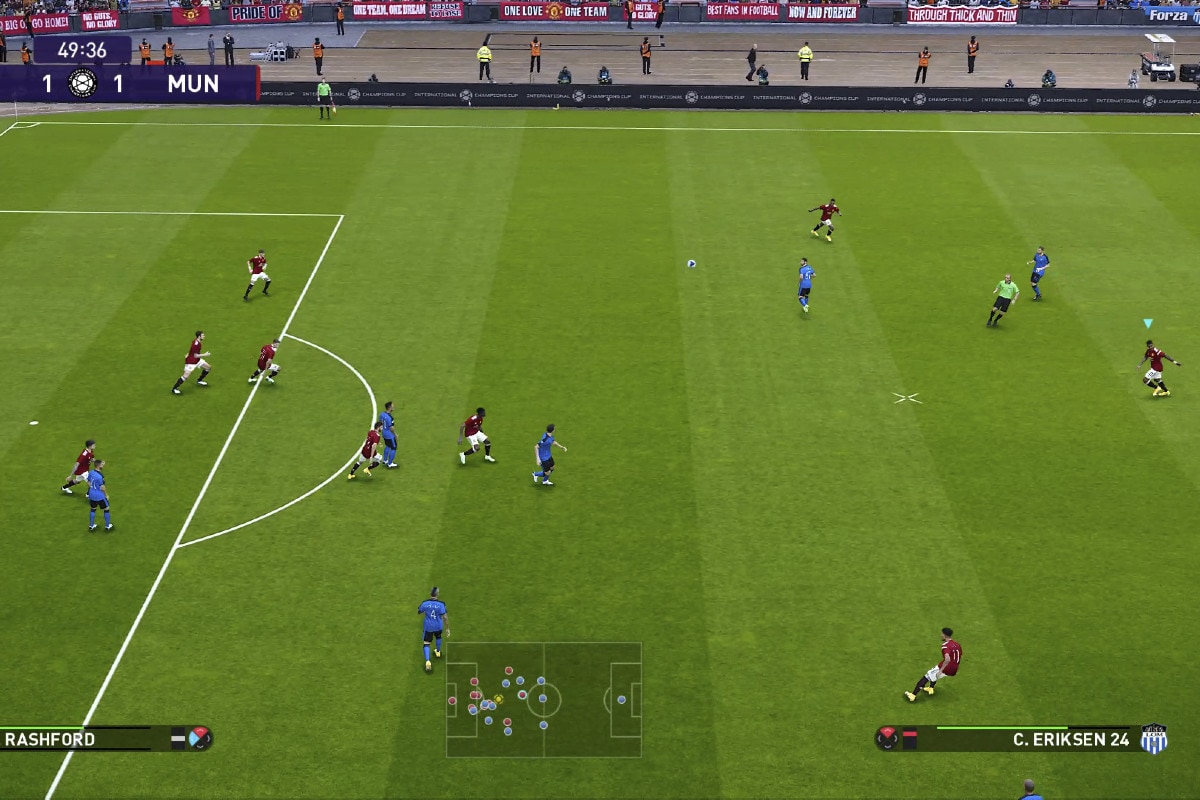 Pushing out from the back after breaking a corner attack feels natural. (Image: News18.com)

There is also this odd irregularity where lower ranked teams suddenly spring up and start playing like Champions League contenders. Smaller teams such as BSC Young Boys and Eibar do tend to threaten you on the counter like a world-beating squad. There is also the odd annoyance where you keep hitting the same target from point-blank range. In one of the games, Marcus Rashford waltzed into the box in smooth, lyrical fashion, only to hit the woodward twice and then, on the rebound, struck straight at the goalkeeper, twice. The last time, the ball hit Kepa Arrizabalaga on his face with full force and bounced out of play. Kepa simply got up and started yelling at his defenders – not something that goalies would be able to do when hit smack on the face from point-blank range.

The fine balances also make comebacks more interesting. PES 2021 gives your attackers that extra sense of added urgency. Playing against Paris Saint-Germain and trailing 2-1 at 80 minutes, I could rally my Manchester United squad (admittedly, including Jadon Sancho and Joshua Kimmich alongside Pogba, Rashford, Anthony Martial and Bruno Fernandes) into a number of thunderous counter attacks, which led to me winning the game 3-2 at full time. Even at the Professional or Top Player difficulty levels, if you have a good enough squad, you will be able to take on the AI defence tactics, and win. Smaller teams with lesser overall rating players, thankfully, do not always run faster than Messi or Rashford – a big problem that often persists with football games.

Beyond these on-field improvements, PES 2021 is almost exactly the same as PES 2020. It looks the same, feels the same, there are essentially the same modes – Master League, myClub (which rivals FIFA Ultimate Team), Become a Legend, and the eFootball mode that pretty much explains what it is about – go online and start taking on others. myClub in PES feels like a friendlier version of FUT, something that does not make it impossible for you to lineup legends in your team. The Master League is the equivalent of FIFA’s famed Manager Mode, while Become a Legend takes you through the paces of a footballing career. 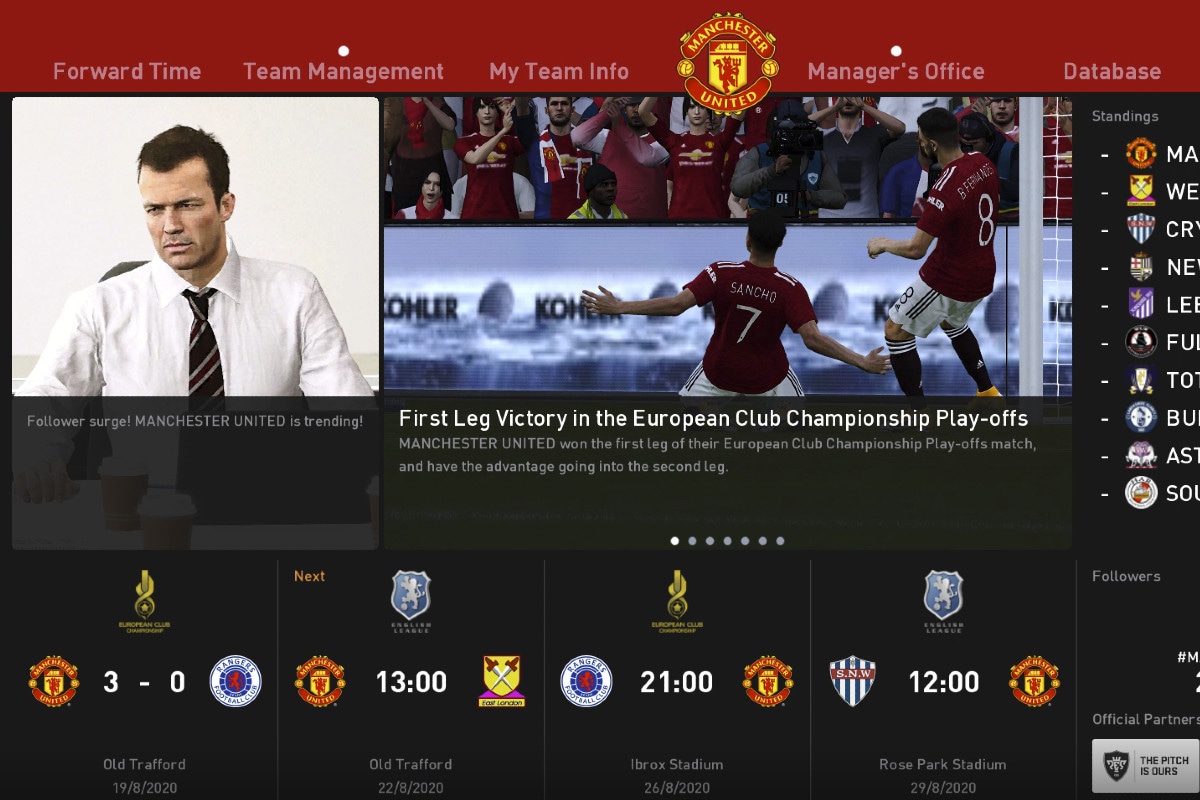 The interface could have been far, far better. (Image: News18.com)

It is in these modes that PES needs a desperate overhaul. While the menu backgrounds are sufficiently cheerful and sporty, there are slipshod finishes here and there – typesets used in the menus look like they belong in 2006, not 2020. At a time when EA Sports is turning the FIFA franchise into the glamorous event that football has become in the real world, PES’ admirable determination to stick only and only to good football seems a bit naive, from the overall experience point of view. Even cut-scenes in Master League, with you the manager and the players you sign, look amateur-ish. While fan reactions have improved significantly, referee actions and commentary still feel like they are stuck a few years ago.

Compare this with FIFA, and you realise that what really works for the latter is the level of finesse that recent modes such as the Alex Hunter journey and Volta have brought to the table, making the game more appealing for the casual player who wants to enjoy a good-looking game of football (or soccer, if you must) at the end of a tiresome day. For this crowd, PES 2021 takes its football too seriously (or too leniently if you turn the difficulty down), and does not have the same levels of intricate finesse that makes FIFA look like a more mature product.

The evergreen question: PES or FIFA?

So, with all of that in mind, there are two questions to answer. The first – should you buy PES 2021? As it turns out, Konami was not kidding when it said that eFootball PES 2021 Season Update was going to be an incremental update to last year’s game. If you already have PES 2020, there is no reason for you to buy PES 2021. That said, this year’s iterative update is inexpensive – right now, it is Rs 2,199 for Xbox, Rs 1,699 for PlayStation and Rs 800 for PC, and with the kind of gameplay improvements on offer, I would say that it is a good, safe game to buy, only if you have budget to spare. If you’re not a keen player, you’re likely to face more of this, which can get annoying. (Image: News18.com)

The second question, then – is PES 2021 a better game than FIFA 20 (and the upcoming FIFA 21)? For the average, casual person that is not heavily invested in football and just wants to score a few goals for fun, PES 2021 is not the right game to buy. You’re better off buying FIFA, where you also get an overall well-polished product that looks and feels premium in every way. Even with Juventus not being on FIFA any more, it still feels complete thanks to more licensed clubs, leagues and tournaments.

However, if Volta, the Journey storylines and the cutscenes do not interest you, and what you want is pure, unadulterated joy of football, PES 2021 is an excellent game for you to buy. It does not disappoint for the most part, and eventually, you also get used to playing against big teams without the official jersey or badges. From the sheer gameplay point of view, PES 2021 is a good game to play.