The fight is tough and the stakes are high in the Indian budget smartphone market. LG is now aiming to get a bigger bite of the segment with its new X Screen smartphone. The USP of the LG X Screen is its dual-screen display. LG had first introduced its dual-screen feature with the LG V10 last year.

The phone, which goes on sale in India from Wednesday, July 20, is priced at Rs 12,990. We got our hands on this phone with an unconventional display. Here's our experience with it, peppered with photographs. The major highlight of the LG X Screen is its display. The LG X Screen comes with two screens: one is a 4.93-inch primary screen, and the other a 1.76-inch Second Screen. The secondary screen is located right on top of the main screen. While the main screen is pretty much like a standard smartphone screen, it is the the second screen that makes it stand out from the competition.

The Second Screen on the LG X Screen (Image: News18.com)

The Second Screen has an always-on display that allows users to check basic information such as time, date, and notifications without having to wake up the phone. The Second Screen, by default, also shows various toggles including that for sound, WiFi, flash-light, and Bluetooth. You can also customise content that appears on the Second Screen. The key advantage of the Second Screen here is that you can have access to a lot of functionalities, including music player controls and recent apps, without having to unlock the phone. The phone looks neat and the glass fibre back adds to its appearance. The rounded corners make it comfortable to hold and the phone feels light in hand. 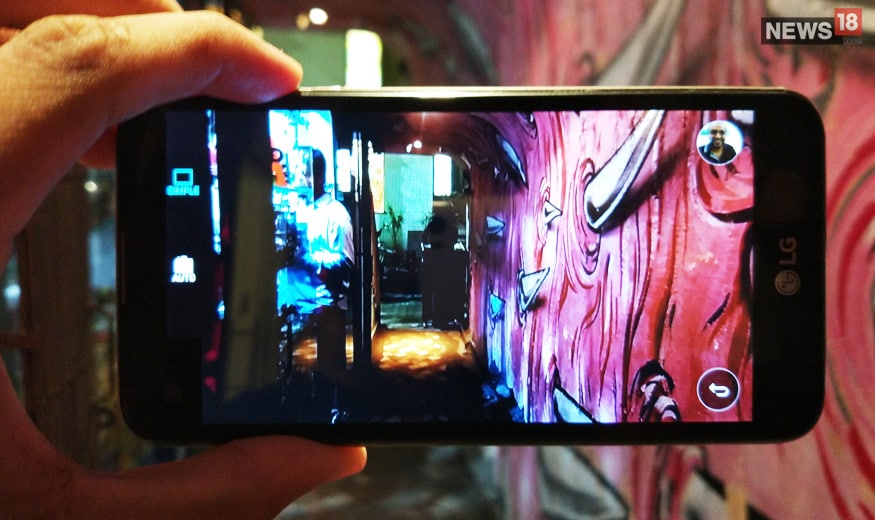 The camera app on the LG X Screen (Image: News18.com)

The LG X Screen features a 13 megapixel rear shooter and an 8 megapixel front camera. In a little time we spent with it, we could only test the phone in a low-light environment. Both cameras generated decent results with some noise in areas with very low light, but they had a noticeable shutter lag. The actual worth of its cameras can be known after putting them to test in other conditions. The LG X Screen is a dual-SIM phone with a hybrid SIM slot (Image: News18.com)

The LG X Screen is a dual-SIM 4G phone, but it has a hybrid SIM slot. This means the second slot on the SIM tray can either accommodate the second SIM or a microSD card. The bottom of the LG X Screen (Image: News18.com)

Lined up in a row, the headphone jack, charging port, and the speaker are located at the bottom of the phone. We briefly tested the speaker of the phone and the results were satisfactory. Like its cameras, we would also want to test the speakers in different environments before arriving at a conclusion.

The LG X Screen packs in a Qualcomm Snapdragon 410 chipset coupled with 2 GB of RAM, that is almost a standard in the price segment. The phone runs Android 6.0.1 Marshmallow and has an internal storage of 16 GB with an option to expand the storage. It has a 2,300 mAh battery that looks decent on paper, but it will take a real-life test to reveal how long it lasts. The phone will be available in two colours - black and white.

You can read our first impressions review of the phone here.