POCO M3 Review: This Rs 10,999 Phone Not Only Looks Really Cool, It Also Has Substance

It is very easy to expect too much for affordable Android phones. If you keep your expectations in line with what you set out to pay for, the Poco M3 more than delivers on that. The 6GB + 64GB config is priced at Rs 10,999 while the 6G + 128GB spec costs Rs 11,999.

We can say it with a generous dose of certainty. You will not believe that the price tag of the Poco M3 is Rs 10,999. Yes, I know the argument that affordable Android phones now are better than they ever have been and all that, but while there has certainly been a significant change in how affordable Android phone are perceived, it’s been a while since one actually stood out. Much to the risk of it seeming, to an outsider, that phones are being launched by the dozen, cut from the same template. That is where the new Poco M3 comes in as a breath of fresh air. In a way, this takes the Xiaomi Redmi 9 Power and build on that where it needed to, including the design, more cameras and perhaps even more importantly, more RAM.

A quick glance at the variants and the prices of the Poco M3 and the Redmi 9 Power make the finer differences come through clearly. The Poco M3 by default comes with 6GB of RAM across both variants that are on sale. The 6GB + 64GB config is priced at Rs 10,999 while the 6G + 128GB spec costs Rs 11,999. We really would recommend stretching the budget to get the higher spec version, because it’ll be a better investment and hold you in good stead for a longer time. Where the fine difference with the Redmi 9 Power comes in with the fact that this phone comes with 4GB RAM instead 6GB RAM, though the pricing of the 64GB and 128GB variants is largely the same.

There is absolutely no doubt that the Poco M3 is by far and away the most versatile when it comes to design, standing out in a crowd and being a visual treat. The Power Black colour is what you should consider if you want your phone to be understated. The Cool Blue would be your pick if you like a really classy look that goes well no matter whether you are at work or spending a fun evening out with friends. And then there is the Yellow, which is what you need if standing out in a crowd is your thing. Between these choices, the balance of blue is my personal pick. 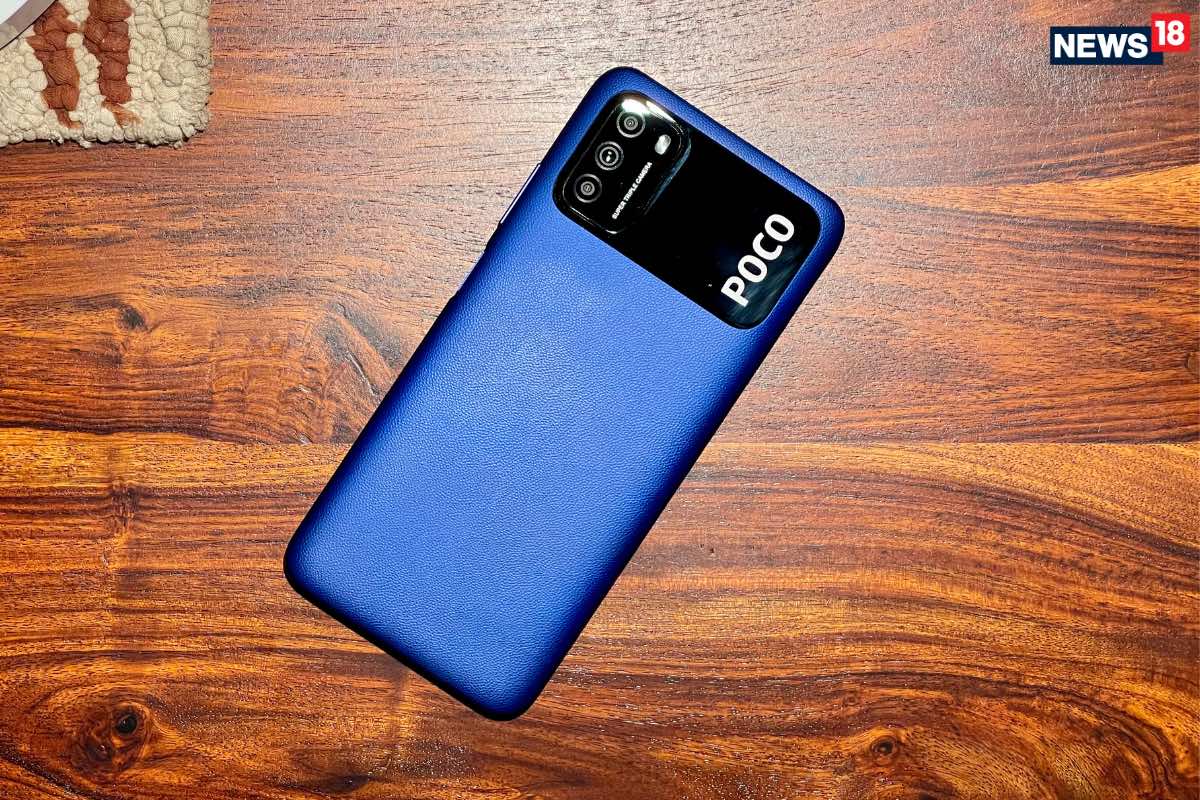 A first look at the phone does immediately tell you that you’re in for something special. And that’s especially true at the back. There’s the dual finish, thanks to the rather different treatment given to the camera module. The black banding, and its glossy black mind you, hosts the camera module on one side. I usually don’t like bold branding, be it gadgets or cars, but this Poco branding in a way sits there and adds a visual dimension. You may like it or not—I’m on the fence on this one—but it certainly doesn’t seem like an afterthought. It is hard to ignore the finish that the Poco M3 gets. It looks like leather, and in a way is textured to feel like it too. Mind you, this is very high-quality polycarbonate. Not actual leather—though this did remind me of the LG G series phones from a not-too-distant past, when LG phones mattered in the larger scheme of things. The biggest positive from what Poco have done here—the extra grip that you get while holding the M3. Less chances of the phone toppling earthwards, assisted by gravity.

Poco M3 Performance: You’ll Get Exactly What You Are Paying For, No Deductions

Let us get this clear right from the start—you should not be expecting the Poco M3 to be some sort of affordable flagship phone or some sort of Android flagship killer Android phone. It isn’t. The price tag makes it clear that this is a phone meant for the masses, who want competent performance at an affordable price tag. Under the hood is a 11-nanometer Qualcomm Snapdragon 662 processor, something we have also seen do duty in the Redmi 9 Power. But what helps it further is the 6GB RAM is default for all variants of the Poco M3 being sold in India. That’s more room for apps, more room for multitasking and there’s that extra headroom available. And it shows in the long run. The performance is quite consistent all through and you really won’t to wait around for apps to load, even if a few are already open in the background. This is an affordable Android phone and more than does its bit to ensure there are no performance bottlenecks. For the most popular daily apps that you may be using, including social media apps, the load times are more than acceptable. Mind you, things will vary very slightly between the 64GB and 128GB storage options—the former is the UFS 2.1 standard while the latter is the somewhat faster UFS 2.2 standard, and that means better data read and write speeds which straightaway means a more responsive system in place. Our observations are based on the 64GB variant, and we believe the 128GB performance will be a notch better for sure, such is the nature of the hardware in play.

This is a big battery phone, with a 6000mAh battery sitting beneath the gorgeous body. And it is a bit difficult to believe this at first, considering the phone sits comfortably under the 200 grams weight mark—its 197 grams to be precise. The Poco M3 lasted me two days on a single charge, when I used it moderately for social media and web browsing, and some photography as part of the test process, and still had 30% battery remaining. This should put even the heaviest smartphone users at ease. Battery anxiety isn’t really factored in, when you buy the Poco M3. MIUI 12 On Poco M3: A Case Of Two Halves; You’ll Maybe Not Enjoy One As Much

The Poco M3 runs the MIUI 12 that we have already seen on many Xiaomi phones, and it has the same set of strong points and the not so strong points. Familiarity, and this may be more than relevant for you, is a huge advantage. Anyone upgrading from a Xiaomi Redmi phone or even a previous Poco phone won’t find themselves in unchartered territory. There are the undeniable advantages of MIUI, particularly with the customization aspects. The built-in system apps such as Weather, control center, floating windows that enable a new layer of multitasking, as well as smart message grouping and the overall aesthetics and transitions all have a modern touch acquired over time.

Yet, whenever there is a conversation about MIUI, there is the inevitable mention of adverts and preloaded content. Both of those are true in the case of the Poco M3 as well. In case of adverts that may end up on your system, you have the ability to turn those off—at least the personalized ad recommendations. Just that you’ll still see ads, but they won’t be personalized for you. In my time using the Poco M3, to be fair, I never really got any adverts, much less something intrusive or annoying. However, there is a serious portfolio of preloaded apps and games on the Poco M3, and one app in particular called GetApps is responsible for generating a lot of advert-esque notifications. Let me list out some of the preloaded apps on the Poco M3—GetApps, WPS Office, Moj, Block Puzzle Guardian, Bubble Shooter With Friends, Dream11, Tile Fun and Crazy Juicer as well as Osom Rummy. If nothing else, these are just incredibly irritating, the very fact that they are sitting there. All this while, eating into precious system resources, which are your RAM and storage. All this being said, it is understandable why Poco is following the industry-wide trend when costs are going up and margins are squeezing more and more. It is no time to get bogged down by who started it and why, but this seems to be a reality for a lot of affordable Android phones. There are fans of this approach, there are those who don’t care and there are who don’t appreciate this.

This is a 6.53-inch display, an IPS LCD, with the FHD+ resolution of 2340 x 1080 resolution. This display can go really bright, and for once, I must praise the other end of the spectrum too. At the lowest brightness settings, a zone that I really prefer, the Poco M3’s screen accedes to your demand and can really dial down the illumination. A lot of phones tend to lean on the side of caution and stay on the slightly brighter side, and that isn’t the truest lowest brightness setting in a way. The rest of the elements of the Poco M3’s display all point in the right direction. Colours are nicely subdued in the default saturation mode, but you can choose saturated mode if that’s what you like. The display size, sharpness and colours all point to a really well-rounded screen for what a truly affordable Android phone. Poco M3 Camera: You’ll Be Able To Wring Very Acceptable Photos From This

It’s a triple camera setup that does duties in the Poco M3, led by a 48-megapixel sensor as well as two 2-megapixel macro and depth cameras. This is perhaps where the Redmi 9 Power has an advantage, which gets quad cameras at the back with an 8-megapixel ultrawide camera an extra addition. From what the Poco M3’s camera delivers, we could see that the photos are nicely lit up and have a generous amount of crispness. Colours look rich but not overbearing. However, in a couple of photos with inconsistent lighting, there is some noticeable softening of the overall sharpness in the off-focus areas. A personal preference has to be the 48-megapixel mode, which pulls in that much more detailing allowing for more flexibility for crops, while the colours are a tad restrained for editing later. The Last Word: A Colourful Personality Does Not Fall Short On Performance

It is very easy to expect too much for affordable Android phones, and that’s a mistake we all have been guilty of making at some point of time or the other. Yet, it is understandable that a Rs 10,000 Android phone will not behave the same way as a Rs 20,000 Android phone. There is a reason why that phone costs Rs 20,000. If you keep your expectations in line with what you set out to pay for, the Poco M3 more than delivers on that. And actually, a bit more, particularly with the genuine standout design. Consistent performance and robust battery life simply add value. And I know what you’re saying. You’ll just have to ignore the preloaded games and apps on MIUI, as well as those adverts if they do show up.