This picture is being considered by many as "biggest proof of Alien existence".

If you are someone who has a lot of interest in theories, especially those surrounding life outside of our planet Earth, you might be aware of the long sought after belief that the human race was started by already existing life that landed on our planet from somewhere else. Though there was (and still is) no solid proof of this, the idea has been reiterated in dozens of movies, shows and even writings across the world. Not surprisingly enough, most of these point at the Egyptian end as the one true source of this information. This is thanks to the astonishingly precise scientific construction of the gigantic pyramids and other Egyptian infrastructure by the pharaohs at the time and their dozens of underlying secrets that, even to this day, bemuse the scientists and the researchers alike.

For this reason, it is no wonder that many theorists consider the pharaohs as beings of another world. In what can be considered as another evidence for these theories, a recent video that has surfaced on the Internet displays an image captured by NASA's Curiosity Rover on the planet Mars. Interestingly, the image displays a Martian rock that resembles the head of an Egyptian woman, and that too, with an alarming accuracy. As per Joe White, the person who spotted the similarity first in his video mentions how the rock is eerily similar to the head of an Egyptian woman warrior.

The discovery by Joe White came as the theorist was surfing through NASA's image gallery containing pictures shot by the Curiosity Rover on Mars. While he opened the image first because of a shiny object lying in the middle of the ground (which was apparently just another Martian rock and is a common occurence on the surface of the planet), he quickly shifted his attention to another rock to the side. Upon a closer inspection, the rock looks more like the head of a statue that got broken and buried in the ground.

More than a simple rock amongst others, the one caught in the hot online debate here looks more like a carefully crafted piece of infrastructure. While there is no confirmation about the origin or the truth of the Martian rock in question here, it certainly has started an online debate across the globe, with many people believing that this is the best piece of evidence till date about the existence of aliens.

Here is a close-up of the image that has sparked this debate: 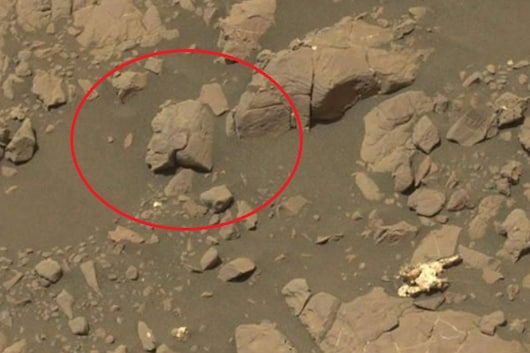 However, this image of the Martian rock is no solid proof of anything, let alone that of Humanity's alien origins. After all, no matter how much it resembles a particular figure, there is always a possibility that it is just an oddly shaped rock.

What do you think? Let us know in the comments section below.