How well do you know your weapons on PUBG Mobile?

PUBG Mobile continues to be one of the most popular online mobile games in the country. The game will be celebrating its second launch anniversary in March, most likely during season 12. Now if you are an avid PUBG Mobile player, then I am pretty sure you have a particular gun combo that you usually prefer. But do you actually know the amount of damage each gun offers?

The game developers don’t actually offer official stats, but thanks to various sources we do have a certain idea. Here’s a list of all the weapons on PUBG Mobile along with their damage stats. Do note, these are not accurate numbers, but are the closest values. The Groza is your best choice when it comes to AR, of course since it is only available through crates it isn't easily accessible. The M762 is also quite powerful, provided you can control the recoil.

The AWM is the best sniper gun on the game, but again it is only available through crates so getting your hands on one can get tricky. DMRs aren't the most popular choice, but if you can get used to them, they can be quite deadly when hunting enemies. The Bizon and Tommy Gun (Thompson) are great options as they offer a long clip once you hook up an extended mag.

The DP28 is a highly underrated weapon one PUBG Mobile. It is a personal favorite as it great for close-range combat and very stable for long-range shots as well.

Shotguns are always impressive when you are in close combat as a single shot to the head can knock down enemies to their feet. 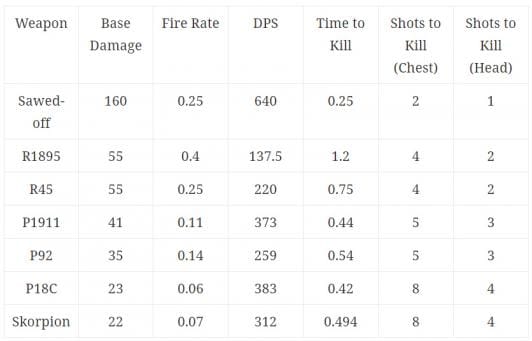 Tell us what is your favorite gun on PUBG Mobile.