The PUBG Mobile India Series 2020 has come to an end with TMS Entity dominating the tournament and winning a cash price of Rs 20,00,000.

TSM Entity has emerged as the winner of PUBG Mobile India Series 2020. Apart from being titled as champions, the team has won a total of Rs 20,00,000. There was a tough fight for the second position but in the end, it was Fnatic that clinched the second spot with Mayhem placed in third place. They win a sum of Rs 5,00,000 and Rs 3,00,000 respectively.

Here's the final tally after the end of day 2 and a total of 12 matches: 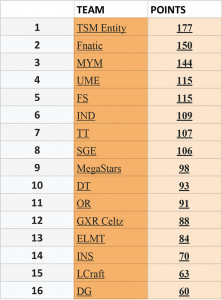 PUBG Mobile India Series 2020 kicked off in May and was open for all to participate. A total of 248 teams were initially selected for the pre-qualifiers that was later increased to 992. The pre-qualifiers saw 62 groups where each team was grouped with a total of 16 teams. Top 4 teams in each group (total 248) further advanced to Round 1 of the tournament. A total of seven professional teams were directly invited to this round. 57 qualifying teams went further to the quarter-final round where seven more professional teams were added which meant a total of 64 teams. Country favorites Team SouL was also suppose to be a part of the quarter-finals, however the team declined to play. A total of 32 teams went further into the semi-finals, and finally, a total of 16 teams battled it out for the grand finals.