Puma Hybrid Runner Unrest Review: More Than a String of Beads, And Basics Are in Place

The price of the Puma Hybrid Runner does make it a rather enticing proposition. The looks, the fit and the fact that you can genuinely feel a difference made by the NRGY beads, makes this a running shoe worth taking a look at.

When two different and distinct personalities are melded together, that entire exercise can result in something completely brilliant, or painfully atrocious. Puma, the German footwear company has tried the entire concept of melding, so to speak, in the newest Hybrid line-up of fitness shoes—the Hybrid Runner Unrest. The two things being brought together here are street style and new technology. The rather innovative silhouette blends a knit upper, a sleek design and a rather innovative mid-sole that uses two new technologies. And that is where the magic perhaps lies.

One look at the Puma Hybrid Runner, and the EvoKNIT upper immediately gets your attention. But that is only till you look a little further down and see the bead-embedded midsole. However, we persist with the upper for a moment. The knit upper is available in two colour options—black and olive, and we quite fell in love with the former at first sight. That, paired with the white beads interspersed with black and orange inserts from the outsole which extend all the way into the midsole from the sides, makes for a visually appealing combination. Needless to say, the first time you walk into a room full of people while wearing these shoes, you will perhaps have some explaining to do about what this tech is all about. The upper is made of an incredibly soft material, that stretches well according to your foot’s contours. It isn’t the smoothest texture to run your fingers on (knit uppers rarely are), but incredibly comfortable to wear. You really don’t need to tug at the tongue or pull at the upper while slipping your foot in—it just stretches enough perfectly. Once you wear the Puma Hybrid Unrest, there is good amount of room for the foot, and at no point does it feel as if the walls are stifling your foot. There is good amount of space in the toe box too, though it isn’t the widest. 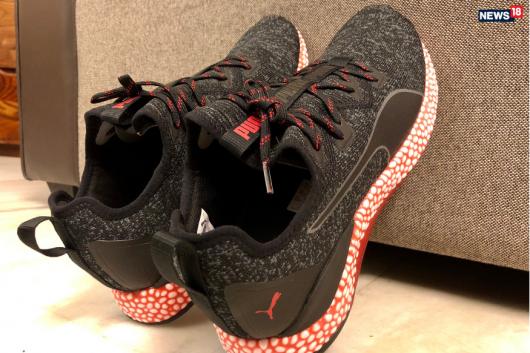 The temporary drawback of this extremely flexible knit upper is that it might feel a tad loose for some runners, since it doesn’t really tighten around the foot initially. However, lace these shoes up properly, and that takes care of this little drawback—the wide placing of the eyelets does help in making the shoe fit better when laced properly. The only little foible that we can notice is if you tighten your laces too tightly, the knit upper creases up a bit near the tongue, because of the soft and flexible materials. At the same time, you don’t mind this issue either, because this upper allows for great amounts of ventilation.

This is not the lightest shoe on paper, tipping the scales around 314 grams. However, you will genuinely not feel the weight when you wear it. At least for daily runs. However, for longer running sessions, the extra weight could prove a tad irritating. 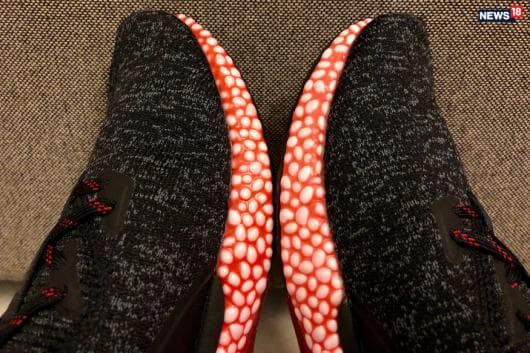 The mid-sole is where the magic lies. Time really has moved on and waving around an Expanded Thermoplastic Polyurethane (E-TPU) based midsole in your shoes doesn’t really cut it anymore. Just as how Nike has done with the Air Zoom Pegasus 35, Puma have also decided that a blend of two distinct materials would give the ideal balance between cushioning, responsiveness and isolation in the Hybrid Runner shoe. Sitting under your foot is a dual-layer midsole that uses Puma’s proprietary Ignite foam. This offers a good amount of bounce-back feel , but still retains a good amount of stiffness to give you the confidence with every foot transition from heel-to-toe, while running. This assured rebound really helps while running. Then there is the second element, called the NRGY beads. They are made of cushioned polyurethane foam, and apart from increasing the tech quotient, they add to the visual appeal too. These run the full length of the shoe, from heel to toe, and are designed to provide extra cushioning. You’ll really notice the difference these make on a hard surface, as compared with just Ignite mid-sole Puma shoes. The very subtle cushioning really works well. You may initially get the feeling that these beads aren’t doing much, because it takes them a few kilometres of usage to really get them flexing as they should. 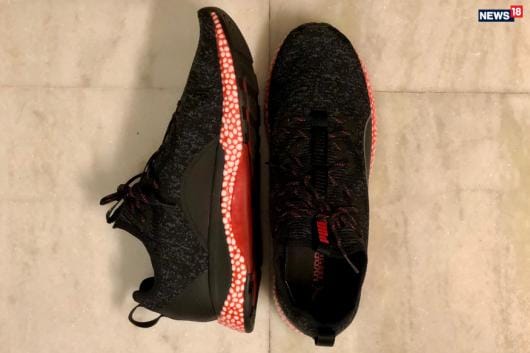 The outsole of the Hybrid Runner has a full rubber outsole. At no point did we feel the grip was inadequate across different surfaces. But, we did not feel as confident while skipping across a marble floor with some rain water left behind, and there was a perceptible reduction in speed even though we hadn’t planned for it. We would say that while the rubber outsole works for the most part, Puma is still clinging on to it at a time when its rivals such as Nike have tried with the VaporMax that has rubber pods on the outsole for durability. It is not an entirely clever thing to do, we feel—this outsole felt dated with the Ignite Netfit shoe quite a while ago, and it is even more out of tune with the times now.

Personally, the design of the outsole grooves and pattern was initially a bit disconcerting during the process of driving a car—because of how the outsole is designed, you have to plant your foot a little differently on the clutch else it tends to not sit flush. This will not be a problem if you are driving an automatic car however.

The price of the Puma Hybrid Runner does make it a rather enticing proposition—the price tag of Rs7,999 undercuts a lot of its rivals, including the Nike Free RN Flyknit 2018 (Rs10,995) and the Reebok Floatride Run ULTK (Rs11,199). The really modern looks, the comfortable fit and the fact that you can genuinely feel a difference made by the NRGY beads, makes this a running shoe worth taking a look at.