In an unveiling of its Snapdragon 630 and 660 processors, Qualcomm executives shared the company’s roadmap for India.

Qualcomm has been in the news recently for many reasons. On the legal front, the company has been engaged in a heated battle with Apple Inc over patent issues with respect to the latest iPhone line-up. Apart from this, the company was fined $853 Million by the Anti-Trust regulators of South Korea back in December.

On the other hand, if you are not much of a lawyer yourself and like to stay away from what goes behind the courtrooms, chances are that you will describe the chipset manufacturer’s current situation as the best possible.

Within 2017, Qualcomm has unveiled its premium Snapdragon 835 processor, introduced Drive Data Platform for smart cars in its Snapdragon 820A, achieved Gigabit LTE Download Speeds commercially as a first-ever, brought IRIS scan biometric authentication to smartphones, introduced dynamic charging for electric vehicles through Halo and the list goes on.

With all these innovations in different sectors happening simultaneously, the question arises as to what core is the company focussed towards at the moment? More importantly, what part of that will reach us here in India?

In an unveiling of its Snapdragon 630 and 660 processors, Qualcomm executives shared the company’s roadmap for India. The following is a break-down of the company’s current offerings and future plans for the country. The Qualcomm Snapdragon 200 line-up essentially focusses towards bringing the 4G connectivity to the masses by enabling 4G on feature phones.

Meanwhile, the Snapdragon 400 tier sees the maximum traction in India.

The processors in this segment power the entry-level smartphones in India such as the Xiaomi Redmi 4A.

Watch Video: Qualcomm VP on Making For India And Why Cost and Performance Matters

The 600 platform saw the latest addition to the Snapdragon family with the 630 and 660 processors. With these processors, Qualcomm introduced its X12 modem for the first time with download speed claims of 600 megabits per second.

Other features of these processors include:

- Hexagon DSP along with support for its Vector extensions, for faster computing.

The Snapdragon 630 processor saw similar features with the absence of support for Hexagon vector extensions and a 508 GPU graphic support in place of 512. 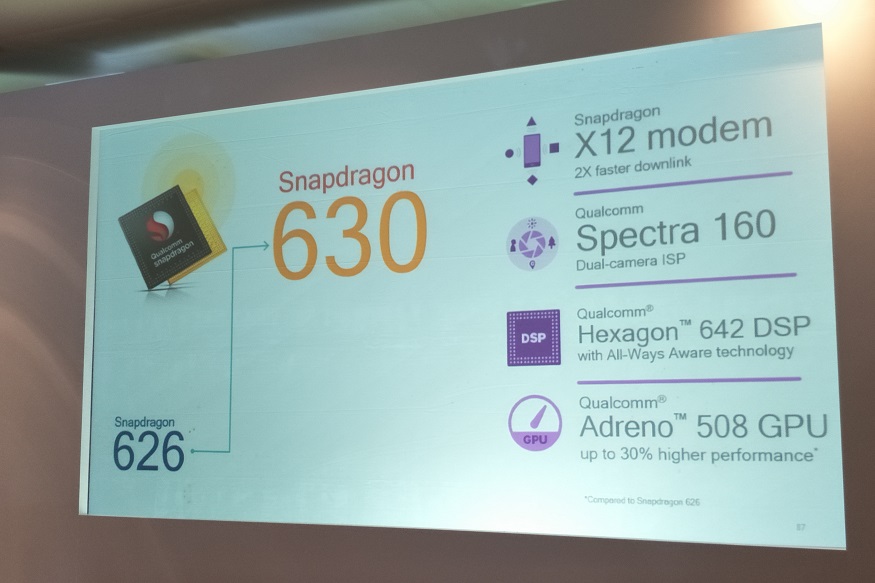 Similarly, Qualcomm’s premium offering – the Snapdragon 835 - brings a variety of new features for OEMs to select and incorporate into their devices.

Now the noteworthy trend here is that Qualcomm is following a trickle-down technology approach. Meaning, whatever they come up with in their premium segment passes on to the lower tiers after some time. Examples of this can be seen with the Kryo CPU and the Dual Camera support for smartphones.

With Qualcomm bringing its top technology vectors to the lower tiers and adding new ones to its premier line-up, the cost of each feature to be added to a smartphone will go down. Smartphone manufacturers will be able to incorporate more features into their lower segment smartphones.

Result: You as a customer will be able to get more features for less cost.

There is no denying the fact that there are other factors that influence the manufacturing cost of a smartphone. But as a generalised approach, OEMs can now opt for lower tier (like the 600) of Snapdragon processors and still include features like the Dual camera and a next-to-best display. As per the senior executives of the company, Qualcomm has its largest market in India and is still experiencing a positive growth trajectory in the country.

More of Qualcomm products are being used in the devices which are brought to India. A recent example of this can be seen in the upcoming OnePlus 5, which will be powered by Qualcomm’s latest Snapdragon 835 and will be the first such smartphone in the country.