Home » News » Tech » Realme U1 Review: The Best Realme Smartphone Till Date, And That is Its Biggest Achievement
7-MIN READ

Realme U1 Review: The Best Realme Smartphone Till Date, And That is Its Biggest Achievement

Realme U1 is the first smartphone in the company’s new U-series of phones, focused on the selfie-centric users. But just how good is the new device?

Md. Waquar Haider
Following the release of Realme 2 Pro and Realme C1 in September this year, Oppo's sub-brand Realme has now unveiled the Realme U1, the first smartphone in the world to sport the Helio P70 SoC unveiled by MediaTek back in October 2018. The Realme U1 is the first smartphone in the company’s new U-series of phones, focused on the selfie-centric users. The device, which is touted by the company as “India’s SelfiePro”, will be available for purchase in India through Amazon. It comes in three color options — Ambitious Black, Brave Blue, and Fiery Gold. As for the pricing and availability, the 3GB RAM model is priced at Rs. 11,999 while the 4GB RAM model costs Rs. 14,999. It will go on sale from 5th December with a few offers from Reliance Jio, SBI Bank, and no-cost EMI option. At this price, is it better than Xiaomi's very popular Redmi Note series of phones?

The Realme U1 sports a 6.3-inch LCD IPS display with a Full HD+ resolution (2340 x 1080) and it sports a pixel density of 409 PPI. The smartphone has a small water-drop style notch on the front as we have seen on other Opp phones and the Realme 2 Pro. The display has a 19.5: 9 aspect ratio. Dimensions of the Realme U1 are 74 x 157 x 8 mm and it weighs about 168 g. It has a MediaTek Helio P70 processor, which is an octa-core one clocked at 2.1 GHz with 3GB or 4GB RAM coupled with 32GB or 64GB. The phone supports up to 256 GB expandable memory via a microSD slot and has a dedicated slot for the same.

Design:
In terms of design, the front of the Realme u1 comes with a transparent plastic with a laminated finish that looks like glass. The SIM tray is on the left along volume rocker keys while power button are placed on the right and are conveniently located for single-handed operation. Realme U1 is not too heavy, despite the 6.3-inch display. It’s easy to hold although the laminated layers don’t stretch to the edges leaving them quite rough. The display is also a bit raised from the body. On the rear side, you will find a circular shaped fingerprint sensor and slightly protruded dual cameras, which are aligned horizontally. The dual camera unit at the back is also a bit raised from the body leaving it exposed to damage in case of a fall. The Realme U1, overall, looks much more refined than the average Xiaomi phone or even the Asus budget devices. The smartphone relies on a down-firing speaker at the base on the phone to provide sound and music. Just make sure you don’t cover it with your finger. At the rear panel, there are the horizontally-aligned dual cameras with LED flash and a rear-mounted fingerprint scanner which is easily accessible while using it with single-handed. For those expecting a USB Type-C port, you might be disappointed as the company is still sticking to micro USB. 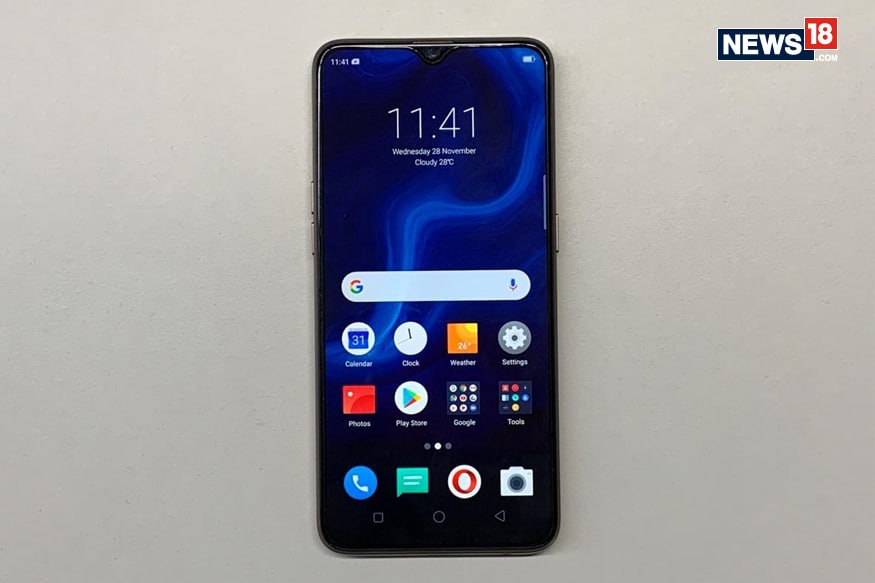 Display:
Waterdrop displays are becoming increasingly common among sister brands Oppo, Vivo, Realme and soon OnePlus with the upcoming OnePlus 6T. You get a 6.3-inch display with FHD+ (1080x2340) resolution, 90.8 per cent screen-to-body ratio and a 19.5:9 aspect ratio. The dewdrop notch houses the selfie camera and the ambient light sensors and does wonders in giving this phone a screen-to-body ratio of 90.8%, one of the highest among phones at this price point. With bezels trimmed minimally from all sides and a small cutout on top, the front panel offers extra real screen estate to consume content. The front panel is protected by Corning Gorilla Glass 2.5. The resolution is 2340x1080 which translates to 409ppi, it is quite bright. The phone also support auto-brightness, which automatically switches between different brightness levels based on the external environment. The resolution of the device is enough for multimedia consumption at any point of time. While the viewing angles of the Realme 2 Pro are decent, the full HD+ display handles heavy graphics with ease as there are no frame drops.

Camera:
On the camera front, the Realme U1 comes with an impressive 25-megapixel Sony IMX576 sensor with f/2.0 aperture lens and 1.8-micron pixel size on the front for selfies and video calling. There is also the AI Beauty+ feature to improve selfies by recognising 296 facial points to provide custom beauty solutions. The rear camera boast of a dual camera module with a 13-megapixel (f/ 2.2) primary sensor, a 2-megapixel (f/2.4) secondary sensor and an LED flash. Group selfies can be enhanced too using the Smarter Groupfie feature. Both the front and rear cameras have HDR. The Realme U1 captures good detail when there is sufficient light around. In bright outdoor conditions, photos will look sharp and colour reproduction is fairly decent. There's also a good amount of contrast and light so photos will look bright enough.

The Realme 2 Pro is also quite capable in taking good photos indoors. The colour saturation and contrast is also higher in this and that helps in making the photos look more palatable. There is a lot of detailing to be found and even the selfie camera captures your facial features quite well. The auto-HDR mode is worth using, as it does a good job of bringing out the lost highlights in an image clicked under harsh lighting. Photos clicked in well-lit scenarios look great and the portrait mode works decently. There are also a bunch of beauty mode effects for those interested, including the option to beautify multiple people in a single shot. It’s great if you have a lot of ugly friends. The camera is slightly better than I expected. It is only in very dim light that the photos turn out to be soft. The selfie AI portrait mode works well and the edge detection is also pretty good, at least for its price point.

Performance:
The Realme U1 is powered by the octa-core MediaTek Helio P70 SoC clocked up to 2.1GHz, coupled with ARM G72 GPU. The MediaTek Helio P70 is an Octa-core processor based on the 12nm fabrication processor, which offers better performance and power efficiency compared to the Realme 2 Pro, which is powered by the Qualcomm Snapdragon 660 AIE (manufactured using 14nm fabrication). It comes with 3GB and 4GB RAM options, but the device which we are reviewing here is 4GB RAM variant. The Helio P70 does come with an APU (Artificial Intelligence processing unit), which will further boost the performance of the device by an inordinate extent. The storage is expandable up to 256GB via a dedicated microSD card slot, which is always a welcome feature. The Realme U1 runs ColorOS 5.2 atop Android 8.1 Oreo.

It's fast, snappy and a delight to work with. Apps are quick to open and load and the processor will handle pretty much anything you throw at it during the day. PUBG Mobile ran on medium graphics but there wasn’t a noticeable drop in frame-rates. The phone also supports Dual 4G and Dual Standby which means you can keep playing on your data connection, even when you receive a call. I had no issues browsing websites on Chrome with a few tabs open, using music apps like Saavn and Gaana was smooth too. The phone offers a host of gestures and features which are quite handy. The ground reality is that for most uses, the Realme U1 manages to maintain a smooth user experience.

Battery life is decent, and the 3,500mAh will easily last you an entire day before you start looking for your charger. Like many other phones in this segment, you’ll find a Micro USB port instead of the Type- C port. The phone lasted for more than a day with usual day-to-day activities that include browsing the Internet, streaming videos, scrolling through the social apps.

Verdict:
To sum up our review, the Realme 2 Pro is a good-looking device which feels a little premium. The Realme U1 at par with the company’s previous launch, the Realme Pro 2 (Buy from Rs 13,990), even though it is powered by a Snapdragon 660 chipset. Must say, the performance of the device is best in class. The biggest highlight of the device is Helio P70 chipset, which makes the device stand exceptional in the budget segment. The camera's performance is another major reason why I will suggest you buy this device. Outdoors in good sun light, the cameras deliver some exceptionally crisp photos Lastly, the Realme U1 ships with a 3,500mAh battery, which is similar to the Realme 2 Pro. The phone gives a little over a day’s use but does not hit the day and a half mark. Nokia 6.1 Plus, Xiaomi Mi A2 and the recently launched Redmi Note 6 Pro have some serious competition in the budget segment.