The Realme X7 Pro 5G is not a bad phone by any measure, and it performs rather well too. However, the super plasticky build and questionable data collection permissions by Realme UI adds question marks to it.

The Realme X7 Pro 5G was launched in China almost five months ago, so straight off the bat, it isn’t a dramatically new phone. However, it does bring to India MediaTek’s top-drawer 5G SoC, the MediaTek Dimensity 1000+. The processor has gained a fair amount of reputation in the silicon world, a large part of which is its commendable price to performance ratio. Benchmark tests have so far shown that while through 2020, the Qualcomm Snapdragon 865 was the king of the hill in the Android ecosystem, the MediaTek Dimensity 1000+ was actually not too far behind. Now, Realme has brought this chipset to India, with its Realme X7 Pro 5G.

One of the biggest draws in the Realme X7 Pro 5G, personally, is its 120Hz Super AMOLED display — apart from the processor, of course. Super smooth frame rates are just one of those things that make a bigger difference in real life than what it sounds like on paper. Apart from that, there isn’t a whole lot to get excited about in the X7 Pro, since it’s about as standard as you’d expect a mid-premium segment smartphone to be. It has a 64-megapixel quad rear camera at the back featuring the Sony IMX686 image sensor (and no optical zoom), claimed display brightness of 1,200 nits, 8GB RAM and up to 256GB storage, 4K 60fps video recording, a 32-megapixel selfie shooter in the corner drill-hole slot, Wi-Fi 6 support, Bluetooth LE support, and a 4,500mAh battery with 65W fast charging.

So, then, given the standardised spec sheet, can the Realme X7 Pro 5G find a niche to offer its audience, and stand out as a smartphone worth being recommended? At Rs 29,999, its immediate rivals include the OnePlus Nord, the Google Pixel 4a, the Samsung Galaxy M51 and the Vivo V20 Pro. Of this lot, the OnePlus Nord has been our go-to recommendation for all, the Pixel 4a we’ve recommended for its camera prowess, and for the Galaxy M51 and the V20 Pro, we’ve noted that they are both good phones on their own accord, but don’t have enough to lead the segment. Can Realme shuffle this up?

As it so happens, Realme is betting on the chipset inside the phone carrying it all the way. The MediaTek Dimensity 1000+ is pretty impressive, offering really smooth everyday operations, and easily stepping up the speed when it comes to gaming. Our standard test games of Asphalt 9, Mortal Kombat and Call of Duty: Mobile all play without any noticeable stutters, and the added support for 120Hz refresh rates are well utilised by the Realme X7 Pro here. The chipset can keep up with the faster frame rates, constantly delivering the sort of smoothness of gaming that you would associate with flagship phones.

The point here is, the MediaTek Dimensity 1000+ SoC is a flagship-grade chipset, albeit being a direct competitor of Qualcomm’s 2020-generation of 8-series processors. Naturally, the smoothness and fluidity in performance can be expected, and the X7 Pro does deliver on it without any major qualms. For everyday tasks, our typical work-day setup of multitasking with three simultaneous email apps, four communication apps, two browsers (each with 10+ tabs actively open), one connected smartwatch and a music streaming app running in the background was pulled off with considerable ease by the Realme X7 Pro. We struggled with the interface of the phone (more on this later), but in terms of pure performance and smoothness of app switching, the X7 Pro did rather well.

While it does have a 256GB variant as well, India only gets a single variant – 8GB RAM and 128GB storage. What’s important to note here is that in terms of pure performance, the Realme X7 Pro outperforms the Pixel 4a, the Galaxy M51 and the V20 Pro. In fact, by benchmark terms, it even outperforms the OnePlus Nord, which clearly means that Realme’s up to something here. As for the rest, this is where questions are raised.

Unless you are a photographer with a super-keen eye for minute details, the Realme X7 Pro 5G’s cameras will appear sufficient to you for casual usage. In fact, the main 64-megapixel IMX686 camera unit is quite good in terms of fine details, noise reduction, dynamic range and low light fidelity. It is biased towards the warm tones and Realme’s camera algorithms bias the colours towards the high saturation-end. But, you can more than make do with what this camera offers, and on overall terms, I personally found the main camera to be quite decent – good, in fact. The 8-megapixel ultra-wide camera, though, isn’t particularly worth mentioning. It does alright for the occasional wide-angle shot that you might feel like taking, but details take a visible hit, to a point where the difference in quality is visible even without using a calibrated external display. It’s not the most impressive ultra-wide angle camera in the market, but for getting the occasional job done, it does suffice. The additional monochrome module does appear to add value to the camera setup, for with the main camera in particular, Realme is delivering a solid punch with the 64-megapixel unit. The X7 Pro can also record 4K videos at 60fps – and higher frame rates are always more welcome over resolution after a certain point.

Software: This is where the issues begin

Sticking to cameras, a question needs to be raised as to why would Realme make its camera app ask for permission to access your phone logs? You also can’t use the default voice recorder in the phone unless you agree to Realme collecting data from it, for “analytical” purposes. There’s no opt-out from this, and it is a default app that cannot be uninstalled either. In essence, this is an antitrust case where Realme doesn’t give the user choice to opt out of sharing what can be their personal data with the company, and doesn’t let them get rid of the app, either. Then, a point about portrait mode in the Realme X7 Pro 5G. While companies have moved up leaps and bounds in terms of refining the background blur effects in portrait mode, the X7 Pro’s camera blur algorithms more resemble the initial portrait modes that cropped up. It regularly blurs the edges of the main subject – even in situations where the edges are not irregular. Focus on a laptop, for instance, and you still have the laptop’s edges blurred, giving the portrait shots an obviously software-fabricated look.

Then, come the Realme UI animations. Despite the fantastic performance from the chipset, the app switching animations and transitions strangely add split-second lags to apps. It looks weird in a phone that is otherwise rather fast, but is being held up because of UI design that isn’t really thoughtful. The obvious answer here is that you can simply turn off UI animations, but that also beats the point of having animations to smoothen the flow of usage. While a minimal delay is obvious and understandable, Realme UI’s transitions take longer than what transitions really should take, meaning that it is the interface that holds back the phone’s performance.

Then, there’s security. Even from a very acute angle, Realme’s face unlock can pick up my face and unlock the phone. It unlocks when I’m not looking at it, when my eyes are closed and when I’m wearing a mask. In other words, anyone who picks up the phone can simply point it at my face and unlock the phone, without me ever meaning to. This is an obvious security flaw in the system, and it makes absolutely zero sense from the security standpoint. Many users today deploy biometric authentication for banking services – if you’d buy a Realme smartphone, simply don’t.

Build and ergonomics: A mixed bag, at best

As the OnePlus Nord set the standard of premium build quality in this segment, we noted how the Pixel 4a also felt good enough but a tad below premium. The Samsung Galaxy M51, meanwhile, felt super sturdy but was prone to scratches and smudges. We couldn’t fault Vivo for attempting to differentiate its offering with a resplendent colour variant and a matte overall finish, and barring its side ring, it almost worked. For the Realme X7 Pro 5G, it’s a tad too plain jane. 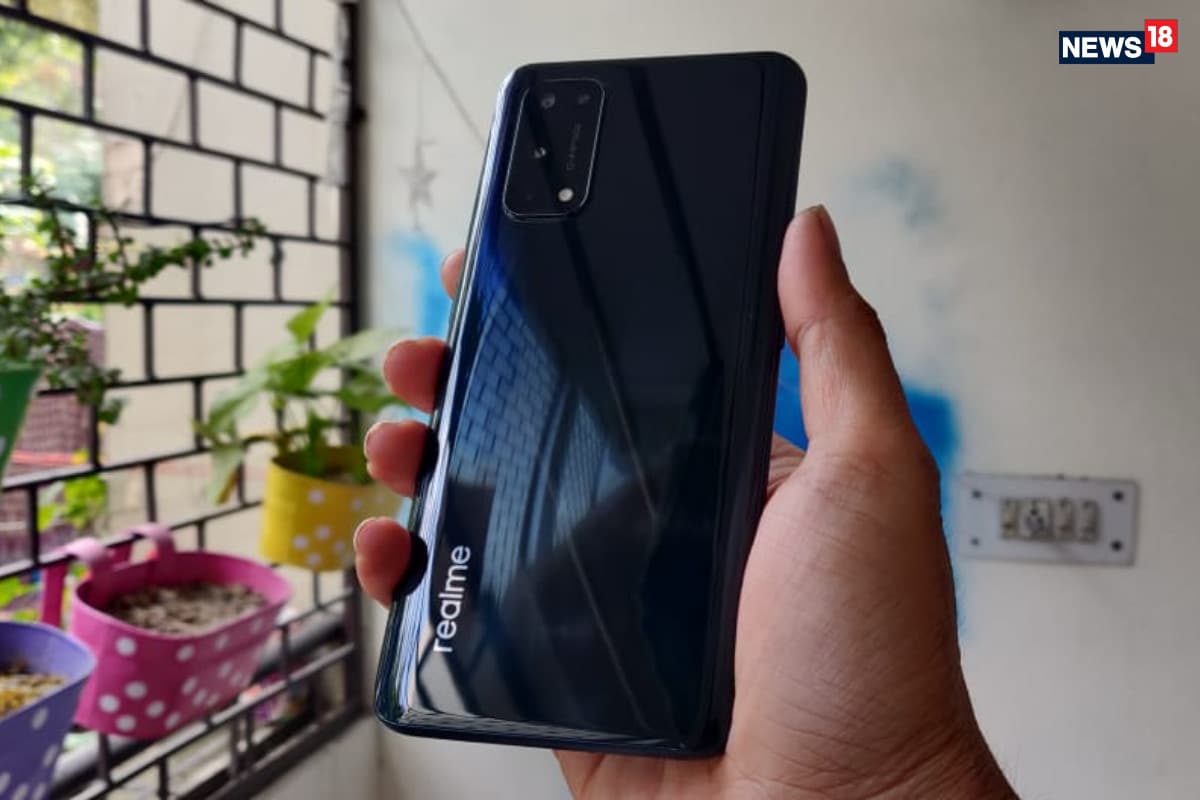 The Realme X7 Pro 5G has a rather uninspiring back panel design that doesn’t really contribute to making the phone feel premium. Despite the glossy finish, the rear of the phone is too evidently plastic. More than the material choice, it is how plasticky the back feels, is what I have an issue with. The ‘64MP’ font on the rear camera module also looks rather tacky, and is bereft of the easy elegance that you’d want from phones you pay a premium for. The side edges that merge with the display have an evident contour, and while that may have been done to add to the grip or ergonomics, it doesn’t particularly feel great.

However, at 184 grams and 8.5mm, the Realme X7 Pro 5G feels light and slim enough to be ergonomic, which is good. The phone fits easily in pockets, and doesn’t feel obtrusive. Its overall grip is fine enough, and while the button placement fell perfectly for my large palm size, those with smaller hands would find the power and volume buttons a bit of a stretch to reach.

The 4,500mAh battery, with the 120Hz refresh rate turned on, can see you through a 10AM-8PM work day, but will need to be charged after that. If you’re travelling without access to a charging point, it is advisable to turn the refresh rate down, which Realme UI thankfully allows. What’s impressive, though, is its charging speed – find a standard 6A power point (should work on both 110V for travel and 220V for home), plug in the bundled adapter, and 100 percent charge comes up in just 40 minutes. Charging the phone for 10 minutes can also give you up to four hours of usage in the 60Hz mode, with about 30 minutes of video conferencing included. That, for most users, should be good enough.

The Realme X7 Pro 5G can be really recommended as a good performance phone. It is one of the smoothest in this category, and most operations remain super smooth and fluid. Its main camera is also quite usable, and so is the front camera for selfies. Its overall battery life is decent, and its charging speed is absolutely brilliant. However, despite its flagship grade performance, its non-flagship idiosyncrasies are far too many. Its build feels distinctly cheap plastic, there are way too many security and permission issues with the software, and its portrait mode still feels stuck in an older generation.

If you personally find the build to be okay to your taste, and you believe that you can live with and find workarounds to the Realme UI issues, the Realme X7 Pro 5G is actually one of the best performing phones in the sub-Rs 30,000 price range. However, the issues will weigh on you, even if you turn a blind eye to them at first.