Home » News » Tech » Reebok FloatRide Run Flexweave Review: Learn From The Past, And Listen to What Your Sibling Tells You
4-MIN READ

Reebok FloatRide Run Flexweave Review: Learn From The Past, And Listen to What Your Sibling Tells You

The Reebok Floatride shoes now get a new upper, inspired by the Flexweave line-up of shoes. And the very good becomes even better.

Not too long ago, Reebok walked the road of revolutionary evolution with the Floatride Run Ultraknit running shoe. But the fitness shoe space is so closely contested, that any brand caught standing still for a while, is basically taking two steps back at the same time. Reebok, which generated a lot of excitement with the Floatride Run Ultraknit shoe, has now unleashed its successor. The new shoe is called the Reebok Floatride Run Flexweave, and there is a lot that it brings forward from the predecessor. At the same time, it imbibes something from one its newer siblings. The Floatride Run Flexweave is currently the flagship in Reebok’s line-up of running shoes, is priced at Rs15,999 and is priced at par with the excellent Nike Zoom Fly Flyknit (around Rs15,995)—both of which cost lesser than the Adidas UltraBoost (around Rs17,999).

The new and the newest
The revolutionary aspect was the fact that Reebok had completely redone the very architecture of a running shoe. Reebok took the footwear design rule book and tore it to shreds. The Floatride Run Ultraknit introduced a 3D design heel cradle and a cage which wraps around for your midfoot and around the heel. The idea was to make the shoe more robust, and that it did. The shoe was also able to retain its structure better, and the foot surely felt more securely locked in during movement. The Ultraknit upper used at the time offered great breathability too. 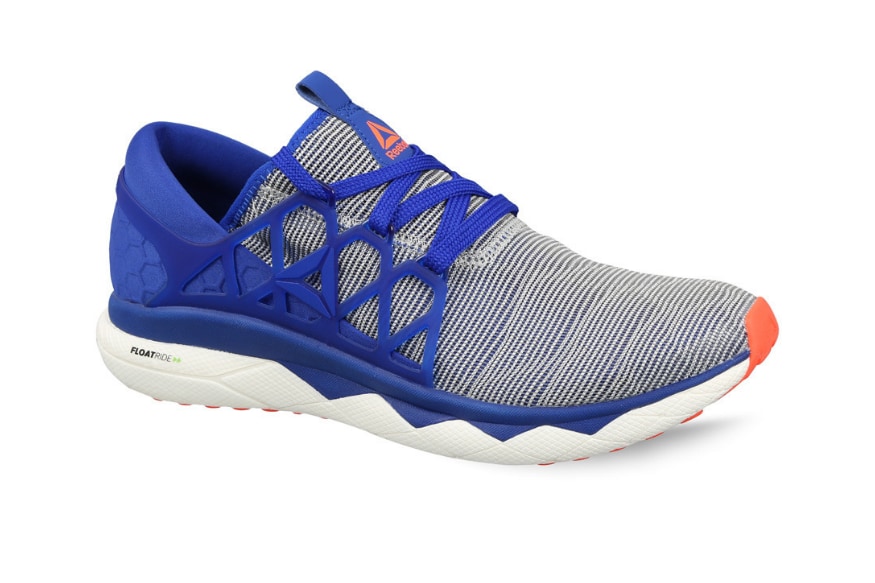 A bit of change is good, isn’t it?
All the revolutions that Reebok introduced with the Floatride Run Ultraknit remain in the Floatride Run Flexweave. But there is one big change too. As the name suggests, the Ultraknit makes way for Flexweave. Reebok’s Flexweave upper is made of strands of fiber which are weaved together in a figure-8 formation. Slip your foot in, and this instantly feels a tad stiffer than a lot of sock-like uppers common in running shoes these days—and that is actually a good thing. From our experience with a similar upper in the Fast Flexweave shoe, this upper certainly looks like it will hold up better in the long run and tends to be more resilient to rough use. Those are probably big advantages, when compared with typical nylon or textile upper materials. There is no compromise on the ventilation aspect either, which is great for the weather in most months.

The heel cradle is something that you may find a bit alienating initially, but once you get used to it, the robustness it adds to the overall structure and the additional stability it offers for the foot, are clearly worth the learning curve.

A midsole with no make-believe boost
For running shoes, the mid-sole really matters. It really sets the difference between a great running shoe and just a run of the mill running shoe boosted by arrogance and a high opinion of oneself. In the Floatride Run Ultraknit, beneath your feet is a mid-sole which Reebok calls Floatride foam. We had noticed with the Fast Flexweave shoe that this is a midsole that offers great balance of cushioning and feedback—and retains that over time and none of those elements fade or dampen. That means the Floatride Run Flexweave is on solid ground as a running shoe worth its price. A good amount of response filters through with each foot strike, which is quite assuring for a runner. After our prolonged experience with the Floatride foam, we can claim that this comes very close to the excellent React foam cushioning in Nike’s Epic React Flyknit (Rs15,995 onwards)—but with that very slight bias towards a bit more reactive response than the more cushioned React. This is where personal preferences with regard to the feedback from a running shoe, will come into play.

Looks matter too
At first glance, the Floatride Run Ultraknit doesn’t look too different from its predecessor. That is because its biggest visual element, the 3D design heel cradle, is present. The only real change with this is that the pronounced Reebok logo is no longer there. The shoe is available in two colorways—one combination is blue/white/red and the other is black/white/ash grey. You may find it a little bit of a learning curve applies when you wear these shoes without socks initially, but that is just the time you will take to get used to the inner lining of the Flexweave upper. The FloatRide Run Flexweave are very light to wear, and once you are set up and ready to go, the cage which may have been visually getting your attention, doesn't really intrude in any way during the foot movement. In fact, we noticed that during change of direction, a properly laced up FloatRide Run Flexweave, assisted by the cradle, does reduce any possible foot roll.

Final call
Safe to say that Reebok has kept what really worked in the very good Floatride Run Ultraknit and has made a mix of big and subtle changes in the Floatride Run Flexweave—and everything is now a notch better. The fact that this mid-sole works brilliantly in the long run, adds credence to claims that the Reebok Floatride Run Flexweave is very much a serious competitor in the running shoe battles. It does go into serious competition with the latest Nike Zoom Fly Flyknit, which is perhaps now setting the benchmark in this space. At least that is true, unless you get your hands on the elusive Nike VaporFly 4%. That said, the longevity of the Floatride foam and the rather unique construction of the Floatride Run Untraknit is not to be taken lightly. Quite certainly worth considering, before you splash the cash on your next running shoe.

Also Read | Marathon Guide: The Ten Running Shoes to Splurge on to Try Beat The Clock