There is the retro aspect involved in the proceedings as well, with the inspiration from some shoes from the 90’s coming to the fore here.

Even though the style and fashion quotient has been going up consistently, at least with some brands, running shoes still need to do something outlandish to be considered truly trendy. If ever they took a huge step closer to the target, it has to be this, the Reebok Sole Fury running shoes. This is the biggest statement that Reebok could have made in the running shoe stakes, and this isn’t just style but there are actual smarts to back that up with. There is the retro aspect involved in the proceedings as well, with the inspiration from some shoes from the 90’s coming to the fore here, including the Instapump Fury. And how much does all this beautiful brilliance cost you? That would be Rs 9,999 please. Which for running shoes, is most certainly classified in the “affordable” folder. This right now has tough competition, including from some of Under Armour and Nike's recent efforts.

First things first, and surely you will notice the Split Cushioning System. This isn’t exactly a new thing, because some Reebok shoes in the 90’s did have something similar. But with time to work on it and the learnings from the previous experience as a generous topping, Reebok has been able to go ahead and make this better. The dual-pronged idea is flexibility and stability, and for sure, this isn’t some gimmick. Reebok shared the White, Black and Colver Green colorway of the Sole Fury TS, and sure is a looker. I’m usually not a fan of white colour shoes, purely from the cleanliness standpoint, but this just fades that reservation into insignificance.

Usually we start the design and the build elements of a running shoe. But the Reebok Sole Fury demands we talk about its standout visual and performance element first. The outsole is made of ethylene-vinyl acetate (EVA) cushioning pods, and the design means the wraparound of the outsole abruptly ends towards the middle of the outside of the show, leaving a visual spectacle that has to be enjoyed. More than that, this physical gap adds a generous amount of flexibility as you shuffle along. Initially, my feet would keep sending feedback that they could feel something was different with the shoe, but that is a matter of the swift and painless learning curve—pretty soon it becomes a part of the routine. There is a stabilization plate, called the Propulsion plate, that runs the length of the sneaker. Apart from the stability aspect, this also helps with the propulsion while running. The energy that is generated with every foot strike reaches this plate and not your foot, and that generates an extra push to get you moving along faster. The Reebok Sole Fury is a performance running shoe, and every but of this tech trickery with the outsole is designed to add that little bit more push towards making your runs faster. Keep an eye on that stopwatch, will you? 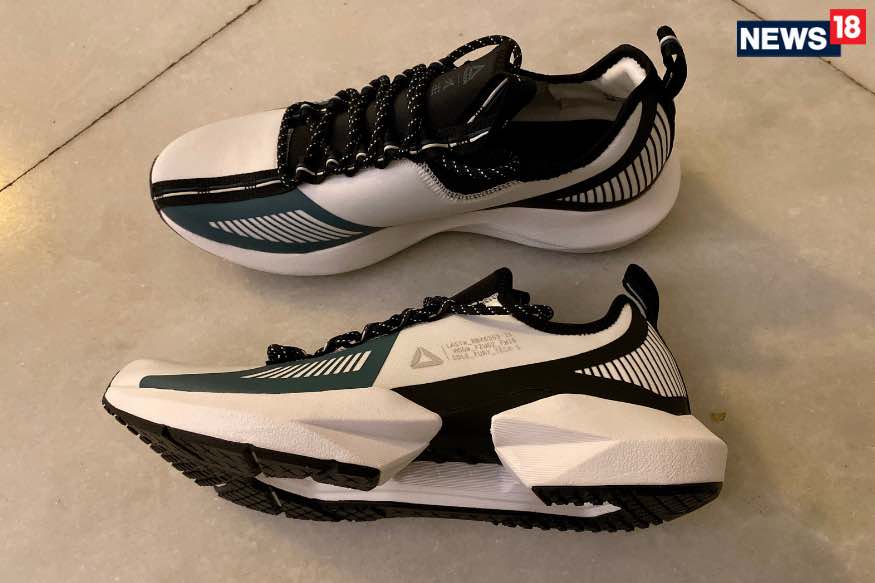 Running shoes usually face a lot of stress and tension as you run on different surfaces, or even use these occasionally for other fitness activities. The Propulsion plate is designed to take away that impact from the midsole, while the redesigned circumference of the outsole gives the materials some leeway to flex and bend. Not that you will notice either of these things actively as you use the Reebok Sole Fury, but this surely helps in improving the longevity of the running shoe you have just splurged your money on. And that is always a good thing.

There was the Under Armour HOVR Sonic2 that I reviewed recently, which went towards the simplistic elegance, and here we have the Reebok Sole Fury which is not holding back. The design itself is quite futuristic, and if someone was to tell us that the Sole Fury is a limited edition shoe (though that is absolutely not the case), we wouldn’t really question their wisdom. That is just how good these sneakers look. The sharp design and the poise make it stand out in a sea of running shoes. It has all the ingredients too. Racing stripes (I love racing stripes on pretty much everything). Random words and numbers to indicate some sort of secret code. The lacing mechanism which is imperfect to look at. The design on the outsole. Everything just comes together in a way that we haven’t seen off late in a running shoe this side of the Rs 10,000 price point.

This much-appreciated extravagance isn’t just limited to the design. Reebok has gone the whole hog. The upper is made of neoprene, a big change from the knit and fabric uppers that running shoes have used (in brilliant ways, mind you) for a while now. This is an even more robust yet lightweight material. Nike has used something similar for the flashy colours in the React Element line-up of shoes. For a while, I did fret about accidentally tearing this upper, because the thinness of it all gives a bit of a scare. But you just have to learn to trust the robustness of this material, and that it’ll stand up to the rigours of daily life. Then there is the band which runs from the heel, all the way around the upper and ends at the midsole at the heel. I like to refer to this as a racing stripe, but this band fulfils the purpose of adding a bit more strength that lets the upper retain its structure and shape.

I had quite admired how the Under Armour HOVR Sonic2 were incredibly light running shoes tipping the scales at 283 grams. The Reebok Sole Fury is even lighter at around 200 grams. The standard rule for running shoes is that lighter is better, as long as comfort and stability aren’t compromised. In this case, neither are. And that is great news.

One thing you need to keep in mind is that the Reebok Sole Fury TS have a very precise fit, and you might have to go half a size up if you want a roomier toe-box, for instance. For instance, I usually wear US 12/ UK11 for my running shoes, but these need to be US 13 to fit comfortably.

The fact of the matter is, this side of the Rs 10,000 price point, it is a tough fight between the Reebok Sole Fury TS and the Under Armour HOVR Sonic2. The latter has the advantage of the Bluetooth integration that lets you pair it with the app in your phone and track steps run, distance covered etc. But if that isn’t a criteria for you, the Reebok Sole Fury are something you must consider. Everything about these running shoes is spot on. And you know for a fact that they aren’t being sold at this price point because they run an inferior piece of tech—what the Pureboost is to the Ultraboost, in Adidas’ world of shoes—a world that I wouldn’t recommend visiting, for various reasons.