Reebok Zig Kinetica Review: When Inspiration From The Past Makes it All Worthwhile

This is a brilliant colorway, with the Sunbaked Orange, Vivid Orange and Black all coming together brilliantly. Honestly, I haven’t seen a better-looking Reebok shoe in a long time.

This takes me back to sometime in the year 2010, if memory serves me well. That is when Reebok launched quite radical looking ZigTech shoes, at least radical for the times we lived in, back then. It was pretty much love at first sight, the distinct zigzag shape of the sole. While availability was quite limited at the time, it didn’t stop a much younger version of this writer, armed with car keys and a credit card, to pop into almost every store in Delhi to find the correct size. Finally, as it turned out, not one but two pairs ended up as a part of the wardrobe. A yellow and black colorway and a blue and black colorway. The former was purely for weekend use, while the latter was a rock-solid companion for daily wear—yes, I am a bit obtuse that way. Which is why, one can safely assume that you’ll probably find lesser people more chuffed than I am with the return of the Zig technology, with the Reebok Zig Kinetica. It brings back that ZigTech outsole, and memories come flooding back. In a good way. A wave of good memories. Oh, the good times.

The 2020 avatar of the ZigTech is a lot different from what it was in its previous guise, all those years ago. But then it has to be. Absolutely not surprising, considering the tech and the advancements that would have gone into making this tech better, over the years. This running shoe is priced at Rs 11,999 and for what it brings to your daily activity routine, it is a steal deal. Even more so, if you have had a brush with the ZigTech in the past.

The upper is made of breathable mesh, something that is in line with pretty much all fitness focused footwear. Some use a more elaborate knit, while some use mesh—but with the focus being on allowing enough ventilation to keep the feet cool, even after an extended running or activity session. Reebok has done well on that front with the Zig Kinetica, because even though we are just about heading into the summer in north India, this mesh keeps the air flow consistent which keeps the feet fresh. In the more humid times, runners would appreciate what Reebok have done with the upper. To be honest, when I first checked out this mesh upper, I was a bit apprehensive about what feels like a thicker than usual construction and its ability to send the heat out and the cool air in, but it does well on that front. This mesh upper also has a rather cool embedded design, which adds to the visual flair. The lacing eyelets have enough cushioning on the underside, and they don’t press on the foot even if you prefer tighter lacing. There are strategic placements of reinforcements, particularly around the heel extending halfway forward on the side—that is where the Reebok logo sits, dressed in Sunbaked Orange. 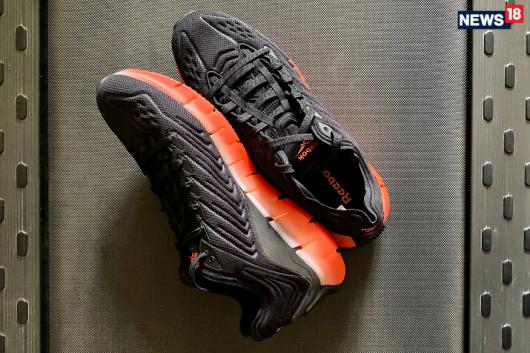 This mesh upper on the Reebok Zig Kinetica also has a rather cool embedded design, which adds to the visual flair. (Image: Vishal Mathur / News18)

Speaking of which, Reebok calls this colorway the Sunbaked Orange, Vivid Orange and Black, and I haven’t seen a better-looking Reebok shoe in a long time.

The blast from the past now done, it was time to get to the business end of the Reebok Zig Kinetica review. Slip the foot in, and you’ll immediately appreciate the nice cushioning all around. There are no hard materials or seams that scrape against the foot, and it all feels nice and comfy. And consistent. All those thoughtful reinforcements play a big role now in keeping the foot nicely locked in, without really feeling cramped or hemmed in.

Beneath your feet sit three very important elements of the mid-sole and outsole. These are Reebok’s Floatride Fuel midsole cushioning, a Zig Energy Shell, and a stretchable Zig Energy Band outsole. The very foundations for the Reebok Zig Kinetica are solid, with the Floatride Fuel which we have seen in Reebok shoes over the past year and a bit more. This provides great cushioning and does pretty well in terms of responsiveness as well. That latter bit, whatever runners may have felt missing, will be given a significant boost by the Zig Energy Shell. This in a way frames the midsole foam and additionally helps boost the energy returns from each foot strike by pushing that upwards towards your feet, thereby giving you that further push forward. The Nike React foam in the newest Nike React Infinity Run does it better than most at the moment, but Reebok’s revival of the Zig Energy Shell does come close in terms of responsiveness while balancing comfort. All this while looking brilliant from the outside. Last but not least is the Zig Energy Band outsole, which is designed to expand and contract, so that you get a spring-like push forward. 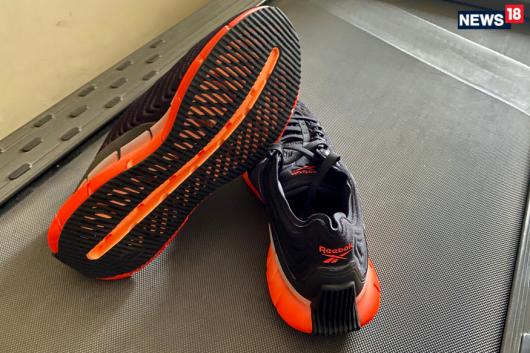 The 2020 avatar of the ZigTech is a lot different from what it was in its previous guise, all those years ago. But then it has to be. (Image: Vishal Mathur / News18)

Unlike the Zig Kinetica Concept_Type 1, there are no adjustable strap locks in place. Which may be a good thing if you like a cleaner look to your sneakers. Plus, you’ll not miss them anyway.

If I have one thing to nitpick with the Reebok Zig Kinetica, it is that it feels heavier than it really should. This tips the scales around 300 grams. But that is subjective—what’s heavy for me may not be heavy for you. The 10mm offset from heel to toe feels just about right too.

Safe to say that Reebok have taken something that worked well in the past, infused it with all the modern goodness possible and given the ZigTech a very modern avatar. The Zig Kinetica is most certainly delivering on its promise as a running shoe. It looks brilliant while at it too. Don’t be too surprised if strangers stop you simply to enquire what shoe you are wearing and where they may get their hands on one. I am happy that Reebok has decided to give us this brilliant blast from the past.