The Samsung Galaxy J6 is priced at Rs 13,990 for the 3GB RAM/32GB storage version, does the J6 really have the chops to take on the competition in this segment? Find out in the review.

South Korean tech giant Samsung launched the Galaxy J6 in India on May 21. The Galaxy J-series addition is meant to offer some premium features on a budget. The top variant which comes with 4GB RAM/64GB storage has also received a price cut of Rs 500 and now retails at Rs 15,990. So with features like Facial Recognition, Dolby Atmos paired with a Super AMOLED Infinity Display and a price tag starting from Rs 13,990 for 3GB RAM/32GB version, does the Samsung Galaxy J6 really have the chops to take on the competition in this segment and earn a spot in your pocket? Let’s find out. The first thing that will strike you on the Samsung Galaxy J6 is its display. Although the resolution is limited to 1480 x 720, there is a Super AMOLED screen which provides vibrant colours and is easy on the eye. As for its form factor, the J6 can be used quite comfortably with one hand and even has a ‘One-handed mode’ which helps to adjust the display size for an even easier control. Although the back panel is made of plastic, the smartphone feels good to hold, given its 5.6-inch display size. The volume adjustment keys, to the left of the screen, and the lock button, to the right, feel solid and have an apt click sound as well.

The Samsung Galaxy J6 has quite a few features which will make users go “Ahh, that’s neat.” First is the Dolby Atmos, present in the notifications panel. This option can only be used when the headphones are on but provides you with a plethora of options when it comes to adjusting the music levels. There’s even an option to adapt the sound specifically to your preferences, termed as "Adapt Sound". Also, on the interface front, the experience is smooth and the touch feels very light and easy to control. 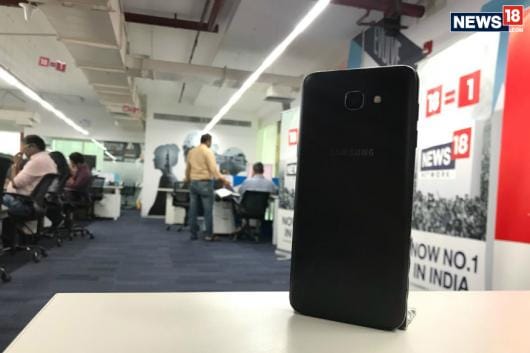 Another clever little detail is the option to take a screenshot by swiping your palm against the edge of the screen from right to left. Just under the volume buttons are the slots for the sim card and the microSD while the speakers are above the lock button on the right of the display screen. The phone also has Samsung based apps like the S Secure, Samsung Pay Mini, Samsung Mall, S bike mode and much more. Also, the camera has a variety of modes like Pro, Beauty, Auto, Stickers, Panorama and HDR (Rich Tone).

There is also an option of ‘Dual Messenger’ which allows users to access two different accounts for certain social media apps like Facebook. Along with this, you can also make use of the ‘Blue Light’ filter which allows a reduction in eye-strain by limiting the amount of blue light emitted by the display.

On the battery front, the phone can easily last a day when used moderately, which involves phone calls, game-play, messaging and surfing the internet (YouTube, Google Chrome, etc.) The Samsung Galaxy J6 will have some juice left even after being used the whole day. When it comes to the performance, the Samsung Galaxy J6 does a reasonably good job and there appears to be almost no lag, which, given the price, is a good bargain.

Although the battery life is one of the feathers in the J6’s cap, it takes quite a lot of time for the battery to charge. When charged for 40 minutes, the battery went from 30 percent to 55 percent of charge, which, by today’s standards, can be considered a little slow. Another chink in the J6’s armour is the plastic back panel. Although the plastic does help in keeping the weight down, it is still quite prone to scratches and smudges. Also, the phone is still on the heavier side weighing at around 154 grams.

Samsung has used an Exynos 7870 Octa chipset on the Galaxy J6. Although the chipset works well for playing games which are not very big in size, the processor is quite old and some may want to have a smartphone with a Qualcomm processor at this price. As mentioned earlier, the camera does have multiple modes for clicking photographs but is it not quite there when it comes to low-light pictures. However, when clicking a photo with normal lighting conditions, the phone does perform reasonably well. To add to this, the front camera, which has an 8-megapixel camera sensor with LED flash, is not very good with its picture clarity. The camera at the rear, which is a 13-megapixel camera sensor does the job adequately but will not turn any heads when it comes to quality.

Another big miss in the Samsung Galaxy J6 is the ambient lighting. If you find yourself making a quick trip outside, you’ll have to adjust the brightness of the screen manually, which can be frustrating at times. Apart from this, the Samsung Galaxy J6 is not really a smartphone that will strike you when it comes to appearance. Although available in Black, Gold and Blue colours, the J6 has a more understated feel to it than one that is radical. From some angles, the J6 does resemble the smartphones of old.

The Samsung Galaxy J6 does check a lot of ticks in the right boxes but comes out short on some which might be considered quite basic to this segment. For example, the ambient light sensor. However, it does have features like the super AMOLED infinity display that set it apart from some of its competition. The Xiaomi Redmi Note 5 Pro is arguably the Samsung Galaxy J6’s main competitor. With a higher internal memory at a slightly lower price, the Xiaomi takes that round but when it comes to the Samsung Experience UI, The J6’s operating system, Samsung has a clear advantage.

All said and done, if you’re someone who likes your phone to have ample battery life throughout the day with a rich viewing experience and are not too big on clicking selfies, the Samsung Galaxy J6 is for you.