Home » News » Tech » Samsung Galaxy S21 Review: It Is Fast, Yet There Is A Lot More To This Android Phone
10-MIN READ

Samsung Galaxy S21 Review: It Is Fast, Yet There Is A Lot More To This Android Phone

This is the complex bit. Samsung’s three-pronged attack on the Android flagship smartphone space starts with the Galaxy S21 and then builds on to the Samsung Galaxy S21+ (Read review here) that does the balancing act quite well and leads us to the top-of-the-line Galaxy S21 Ultra (Read review here). We have already seen what the two more expensive siblings can do, and how well they deliver on the proposition. Yet, it is the Samsung Galaxy S21 that has the most at stake, has perhaps the maximum responsibility and is most vulnerable to competition and market forces. That has to be the baggage of being the entry point into the latest Samsung Galaxy S21 smartphone line-up and also the most affordable of the troika. 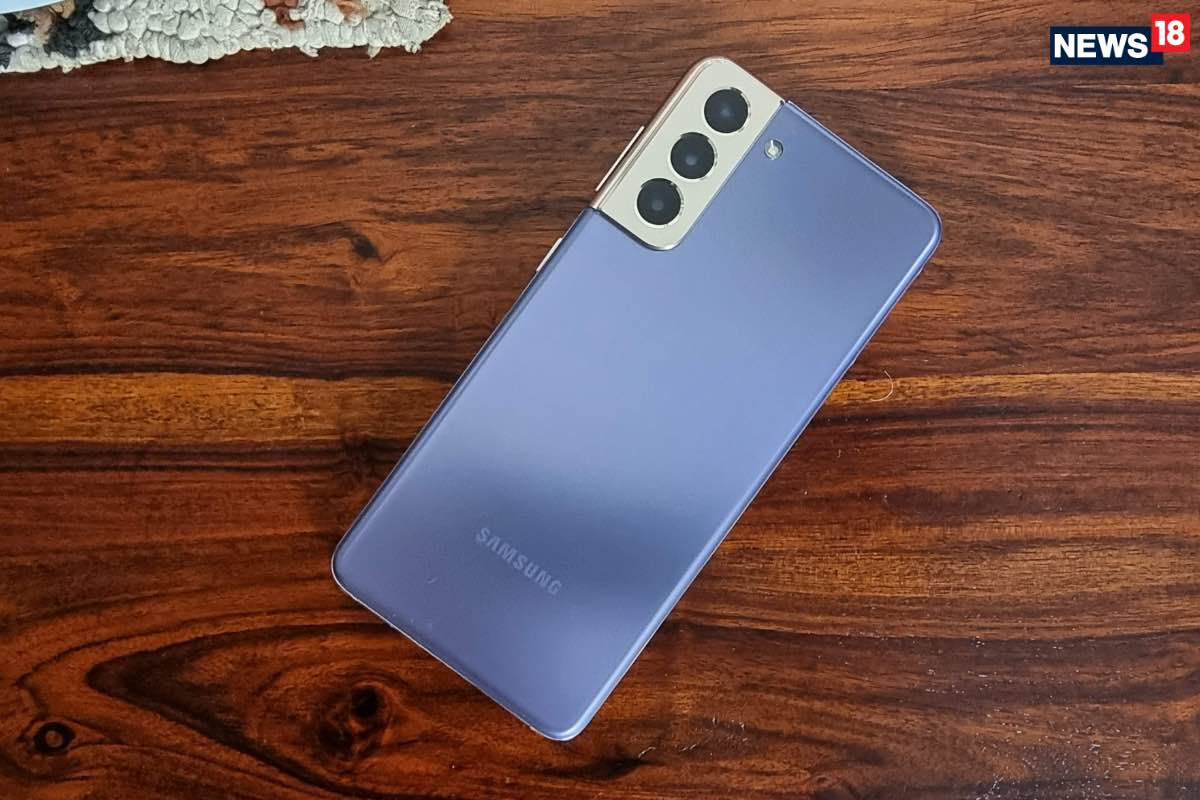 Samsung Galaxy S21: You Have To Extract Value From The Deals: This is where, as a prospective Samsung Galaxy S21 buyer, you must play the deals smartly. Assuming you want to buy the Rs 69,999 entry spec Samsung Galaxy S21 variant, you should try to derive value from the Rs 5,000 cashback that is available for HDFC Bank cards. That means your new phone will cost Rs 64,999. And if you have an old phone to trade in, you’ll be able to take advantage of an additional Rs 10,000 discount in that situation. Else, the OnePlus 8T beckons, at a much lower price tag.

Unlike the Samsung Galaxy S21+ and the Samsung Galaxy S21 Ultra, the Samsung Galaxy S21 does not do the mix of metal and glass. Instead, it is plastic at the back, albeit very high quality one. It’s one less thing to break in case the phone slips out of your grasp and tumble earthwards. There is a perception that plastic backs on phones equals a compromised build quality and a made-to-cost user experience, but in my humble opinion, that most certainly isn’t it. The Samsung Galaxy S21 is very pretty to look at, particularly in this Phantom Violet colour. I’m sure the Phantom Pink is similarly pretty too. Your other choices are the more conventional Phantom White and Phantom Grey. A diverse range to pick from. I’m all for big screen phones and you’d rarely catch me using a compact smartphone. I just love the larger display canvas and the comfort it brings. But equally, there is still a large demographic of smartphone buyers who don’t prefer large phones and would like to pocket something more compact. The Samsung Galaxy S21 appeals to that user base, being the smallest display in the entire Samsung Galaxy S21 line-up. This is a 6.2-inch screen, and that brings the advantage of a really manageable footprint and weight—the latter is just 169 grams, quite a proverbial oasis in a proverbial desert. Much like the Galaxy S21+, the Samsung Galaxy S21 also doesn’t have the curved display. For most users who may be upgrading from a mid-range Android phone, that really isn’t a problem. But if you are indeed replacing a phone that has curved sides on the screen, swipe gestures will feel a tad weird. At least initially.

Samsung Galaxy S21 Performance: At Par With The Galaxy S21+, On The Grunt Front

Much like the Galaxy S21+ and the Galaxy S21 Ultra, the Samsung Galaxy S21 also gets its immense power from the latest generation Exynos 2100 processor. Just like its slightly more expensive sibling, Galaxy S21+, this also is available in a single state of tune, that is with 8GB RAM. And you choose between 128GB and 256GB storage, and choose wisely, because there is no memory card slot anymore. This is my third phone experiencing the Exynos 2100, and the credentials aren’t in any doubt whatsoever. In terms of the performance, this is without doubt faster than last year’s Exynos 990, and there is a specific reason for that—it remains cooler for longer. In my opinion and based on what I have experienced, the Exynos 2100 does a significantly better job of staying cool, at least comparatively, which means it is able to hold performance for longer. The other advantage—the battery life also remains robust. You may not exactly notice the definite performance boost for the most part because we are comparing this with a predecessor that is already very powerful, but you’ll certainly see the improvements when you game or really multitask on the Galaxy S21. 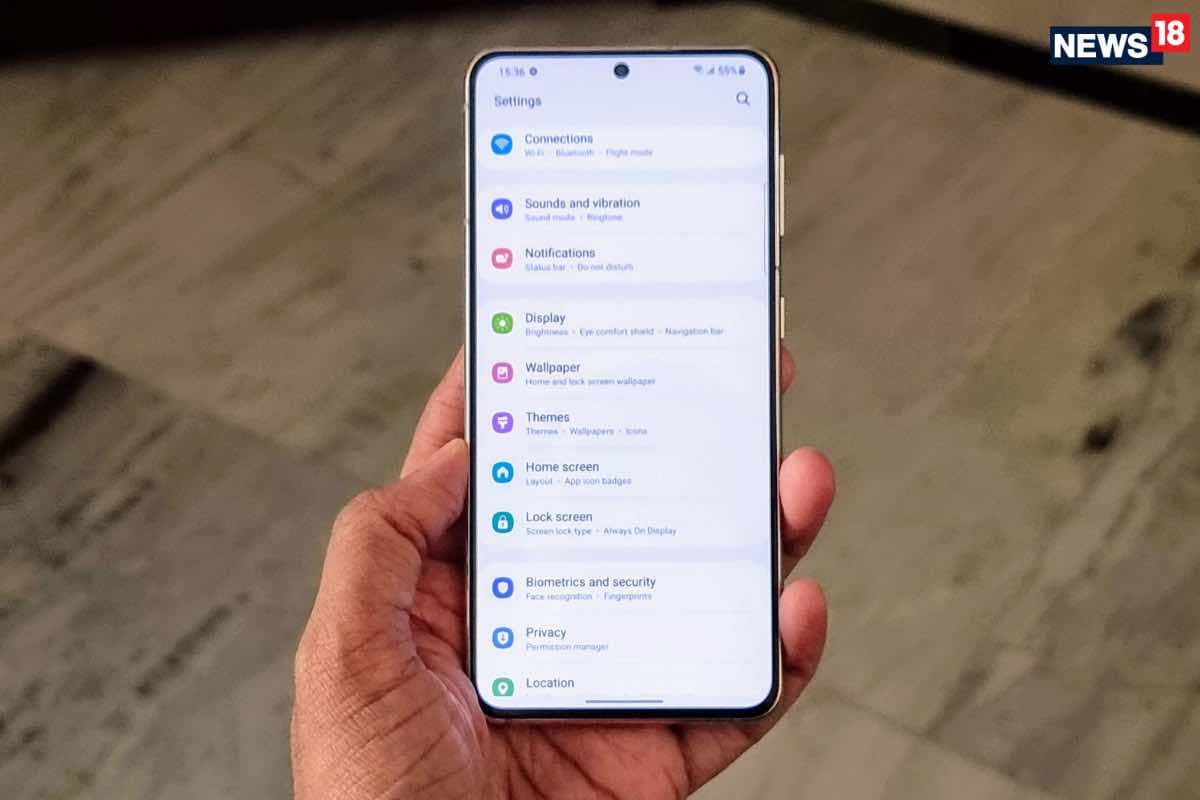 The snappiness is also contributed by the UFS 3.1 storage, which adds that extra dollop of speed compared with the UFS 3.0 storage standard that last year’s Galaxy S20 rocked. That means even faster read and write speeds, which add to the overall performance experience. All of it makes a difference.

Battery life is quite robust as well. A fully charged 4000mAh battery of the Samsung Galaxy S21 returned 4 hours and 30 minutes of screen time and there was still 20% battery remaining. This, when the screen was in adaptive refresh rate mode up to 120Hz and the Power Saving Mode has not been turned on at any point. The thing is, you’ll get through a day with ease with the Galaxy S21, though the physical limitations of the more compact footprint mean the battery pack isn’t as big as the 4800mAh pack that the Galaxy S21+ gets.

Samsung Galaxy S21 Gets Ads In The Interface, And That Is NOT A Great Idea

And over time, Samsung has been quietly improving the One UI interface wrapped around Android, across the Galaxy S21 line-up, in terms of visual tweaks, under-the-hood optimizations and just setting everything in place. It looks cleaner than ever before, but there is still some way to go. I’d call it that, and the cluttered quick settings panel needs to be a bit cleaner. At least by default—give users the options they may need but let those be optional and on-demand, stored away. Secondly, it is great that the Samsung Galaxy S21 gets the pure Google Messages and Google Phone apps which can be set as the default for their respective duties, but the phone still has Samsung’s own Messages and Phone app. Its just causing clutter, and often times, users will tap on the other one and not realize why everything suddenly looks different. 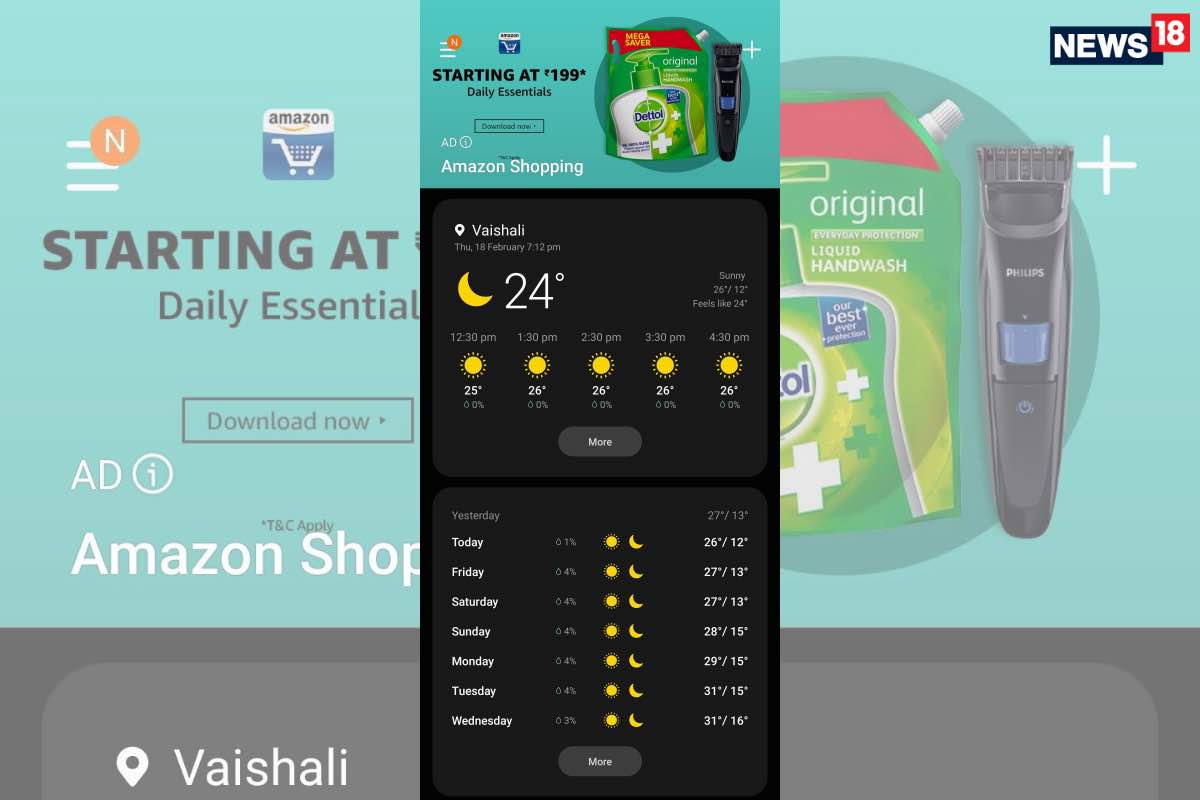 And then there is a problem that I feel may only escalate and become more prevalent in the coming times. At least I hope it isn’t that. There are ads beginning to emerge in Samsung’s Android experience. I didn’t see any adverts in the notification bar, at least not yet, but tap on the weather widget on the home screen and the Weather app opens with an advertisement bar sitting at the top of the interface. Not sure what the volume of this advertisement delivery is and how much money it earns Samsung, but I’m fairly certain that it probably isn’t worth the risk of the hit on the reputation. It surely wouldn’t be fun to be talked about in the same breath as some other phone makers (often lovingly generalized as “Chinese phone companies”). And surely, a flagship series phone doesn’t deserve an advertisement layer, no matter how rare. It just shouldn’t exist.

Samsung Galaxy S21 Display: Lesser Pixels To Play With, And That Is Perplexing 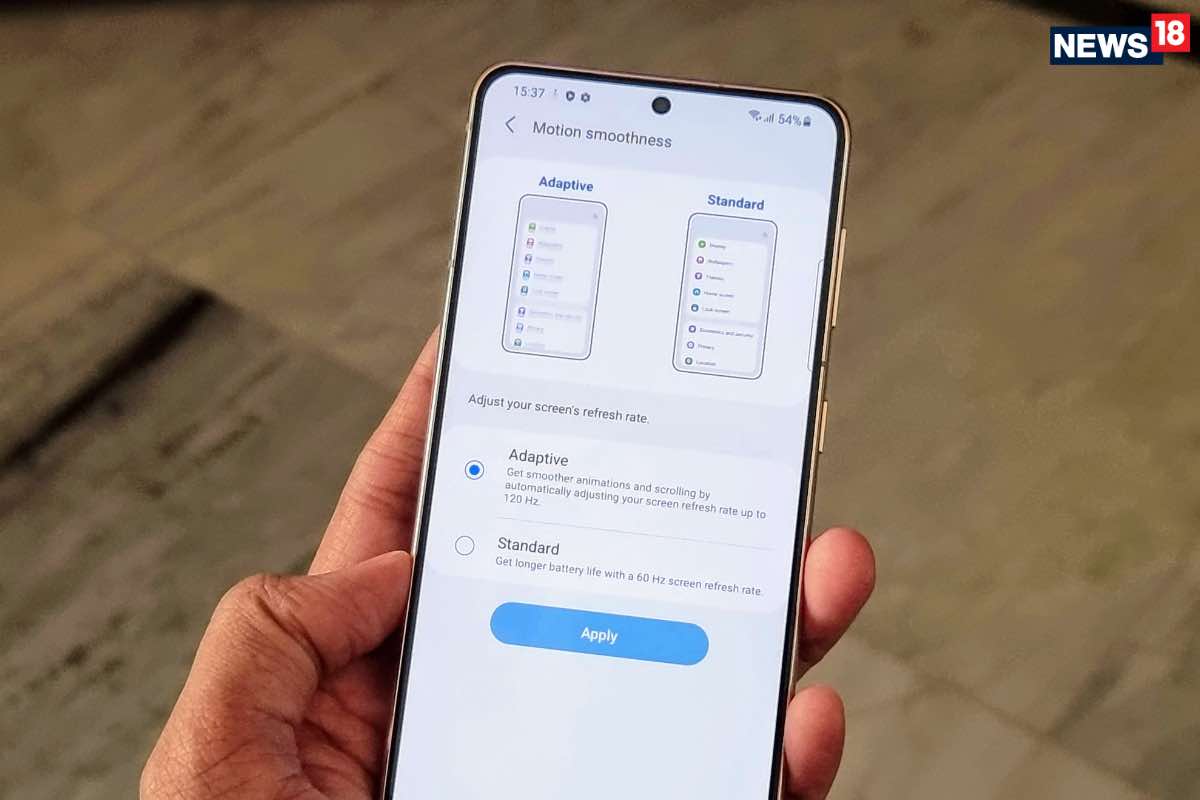 Lesser resolution of the display from the outset might turn off some customers. Yet, what still helps, and whatever consolation that may be for those who remain unconvinced, the Samsung Galaxy S21’s display is still one of the better display efforts by Samsung. If not the best. The experience doesn’t get a downgrade, to be honest. It’s also a slightly brighter display, at 1300nits. At the same time, viewing content on this is a really comfortable experience. It is rich, vibrant and sharp, all of which ensure you aren’t left battling reflections to read comfortably. Yet while it doesn’t feel inferior for the most part, the reduced pixel count does take away some of the futureproofing that you’d expect from a flagship phone, that costs as much as this, and something you may want to hang on to for a few years.

Samsung Galaxy S21 Camera: Stood Still, Yet Not Taken A Step Back

The one area where Samsung has almost stood still, and to be honest I didn’t expect this, is with the Samsung Galaxy S21’s camera. This still rocks the same combination as last year—a 12-megapixel wide, a 64-megapixel telephoto and a 12-megapixel wide. The hardware side of this is the same as before, which means what you get from the outset is a very competent camera and something that’ll hold its own in multiple lighting scenarios. Yet, there are updates on the software and image processing side of things, something that also is visible on the Samsung Galaxy S21+ and the Galaxy S21 Ultra, though the latter has very different hardware to build on with. As a camera in your hand, the Samsung Galaxy S21 delivers in most lighting scenarios. To be honest, you don’t need to wring its neck to extract good photos, though I did notice at times that the image processing requires you to hold the camera stable for an extra millisecond after tapping the shutter key, else you may get a blurry mess. Yet, that isn’t true for all photos, and I’m unable to see a consistent trend as to why that happens occasionally. That being said, the photos this pulls out are rich and have good dynamic range, vivid colours and adequate sharpness. I particularly like the 64-megapixel resolution mode, which just adds that much more detailing to a photo that is also much larger in terms of its size.

The Last Word: Samsung Galaxy S21 Is Fighting Many Battles, In One Go

The Samsung Galaxy S21 is in a tough spot. It’s the most affordable Galaxy S21 series phone, the entry point into this year’s flagship Android phones, from the house of Samsung. And that means the weight of the world is on its shoulders. Yet, it is unable to undercut some of its rivals, as far as the sticker price goes—and that means it’ll be challenging your loyalties, as a buyer. That being said, Samsung has given the Galaxy S21 a more powerful processor which also delivers more on the battery life bit. The design is also much more appealing, to the extent that I’d call it genuinely pretty. And the One UI updates are largely headed in the right direction. But it is still hard to shrug off the feeling that the Samsung Galaxy S21 isn’t exactly an upgrade big enough for you to rush out with your Samsung Galaxy S20 and trade it in. Yet, for a first-time buyer or anyone upgrading from a lower spec phone, the Samsung Galaxy S21 is a pretty interesting option.