The Samsung Galaxy S22 series will be launched in India in the coming weeks.

The Samsung Galaxy S22 and Galaxy S22+ come with identical specifications, while the Galaxy S22 Ultra comes as an ultra premium flagship offering from Samsung.

Samsung Galaxy S22 series has been officially unveiled by the company on Wednesday. This year we get a mix of three smartphones that includes the Galaxy S22, Galaxy S22+ and the Galaxy S22 Ultra. The flagship devices from Samsung get the new 4nm chipset which supports 5G connectivity. The phones also use the new Samsung One UI 4 interface with Android 12 operating system in the background. We take a closer look at the new Galaxy S22 series smartphones and tell you what is new about these devices and how they compare with each other.

Samsung Galaxy S22 series has been designed with the use of durable materials. Both the Galaxy S22 and Galaxy S22+ are made with Armor Aluminium frames so that you don’t have to worry about damaging the devices. Add to that, the display on these two smartphones get the new Corning Gorilla Glass Victus+ for protection against accidental drops. The edges are curvier and the overall feel of the device has been enhanced for better grip in the hand. The triple rear camera setup is placed vertically. The Galaxy S22 weighs 168 grams and comes with a thickness of 7.6mm. The Galaxy S22+ also gets 7.6mm thickness but it weighs 196 grams because of the bigger screen on board. 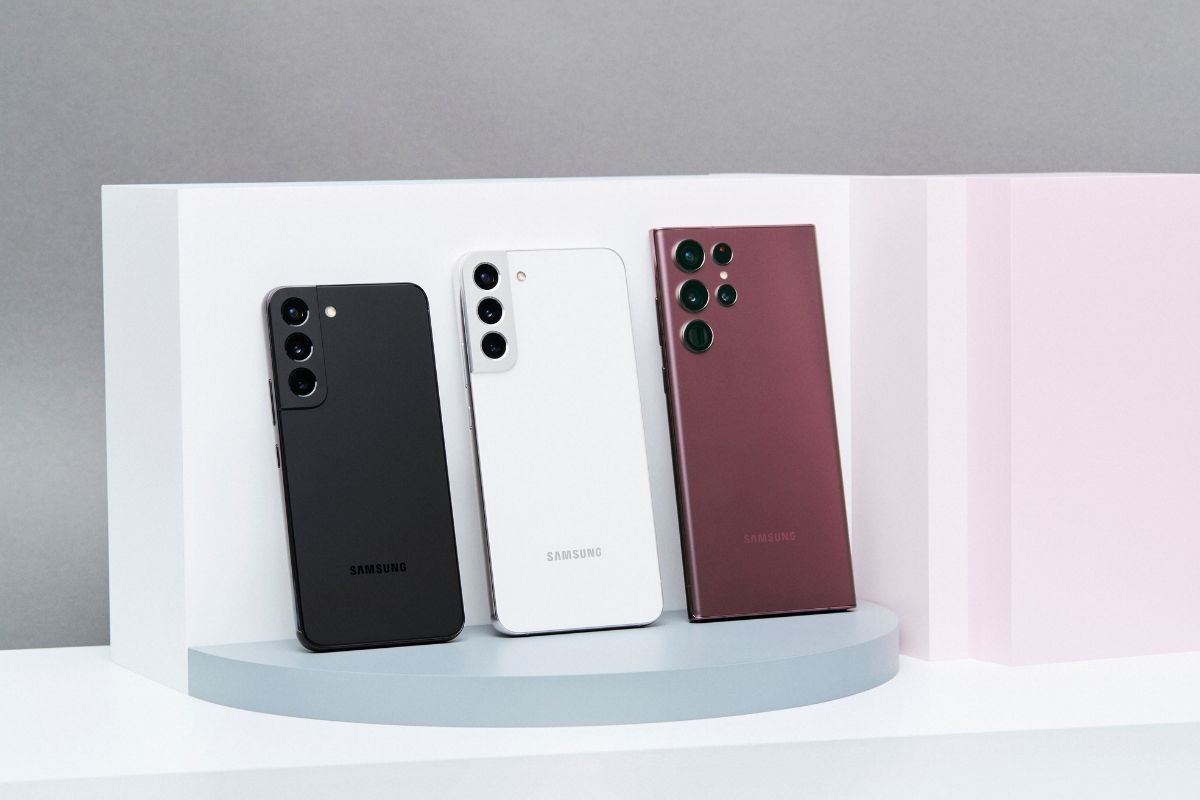 The Galaxy S22 Ultra is the new kid on the block from Samsung, and everything about this device has been refreshed to get more out of it. There is a definite Galaxy Note-like outlook about the Ultra variant, especially since it has a slot for the S Pen, which is on the bottom-left. Yes, the rumours were true. Even at the back, the cameras are laid out in an elegant manner, as the quad rear sensors have been spaced out with focus on keeping the design clean. The screen is the biggest of the three on the Galaxy S22 Ultra, which translates into a thicker device at 8.9mm and heavy as well at 229 grams.

More importantly, all three of these devices come with IP68 rating for dust and water resistance. Even the S Pen bundled with the Galaxy S22 Ultra supports this feature. For security purposes, these get an on-screen fingerprint sensor. Galaxy S22 Ultra gets a 6.8-inch Dynamic AMOLED 2X display as well but because it’s a premium model, it offers Quad HD+ resolution, along with adaptive 120Hz refresh rate, and 240Hz touch sampling rate in game mode. Safe to say with these figures and quality, the Dynamic AMOLED display on these phones offer bright contrast and colours that pop out.

Samsung is using top-end hardware for its flagship series once again. The company has powered all three devices with a 4nm chipset without disclosing if it is the Snapdragon 8 Gen 1 or its own Exynos 2200 SoC. But what we do know is that Galaxy S22 and the Galaxy S22+ have been offered with 8GB RAM but with the storage options of 128GB and 256GB, which sadly is not expandable. With the Galaxy S22 Ultra you have multiple variants with 8GB and 12GB RAM. While the storage options for buyers start from 128GB, and go up to a whopping 1TB this year. The other big difference with the Ultra model is the S Pen support for the first time. It even has a slot to house the Samsung stylus.

Cameras are another department where the Samsung Galaxy S22 series gets some big upgrades. The Galaxy S22 and Galaxy S22+ feature a triple rear camera setup that consists of a 12-megapixel ultra-wide sensor, a 50-megapixel wide sensor and a 10-megapixel telephoto sensor. While on the front, they come with a 10-megapixel shooter.

Rest assured, the cameras are expected to match the best in the market, and we are excited to see what Samsung has to offer this year. Moving to the Galaxy S22 Ultra, the brighter display and a bigger screen size has invariably resulted in use of a 5000mAh battery which gets 45W wired fast charging and 15W wireless charging support.

After looking at the detailed set of features, it is easy to see how Samsung is going up against other flagships with the Galaxy S22 Ultra. The other variants of this series make up for the numbers in an impressive fashion, and give buyers more choices, without compromising on performance or quality in any way. We are eager to see how these devices fare against the other premium models that you have in the market.

S Aadeetya, Special Correspondent at News18 Tech, stumbled into journalism 10 years ago and, since then, has been part of established media houses cov...Read More