The 6-month-old Samsung Galaxy S7 edge in all its glory. (Image: News18.com)

After using the Samsung Galaxy S7 edge for almost seven months, here is what I feel about the phone’s performance and whether is it still a good buy.

Over the last six months, I have been using Samsung’s flagship Galaxy S7 edge - which I bought in the last week of May for Rs 56,000. This is a whole lot of money to spend on a phone but being a smartphone enthusiast, one can certainly relate to giving away that money in exchange for such a phone.

To begin with, before buying the phone I faced a tough decision of either buying an iPhone 6s (like most users who have that budget) or to act a little out of the crowd and go for the Galaxy S7 edge.

I must say, Samsung went all out marketing its flagship marvel and one could easily see huge buildings covered with ‘the edge’. Other than this, if you compare the specs, the flagship beats any of its competition easily. So, that was that. I went ahead and bought the Samsung Galaxy S7 Edge.

After the recent Galaxy Note 7 fiasco, competitors like Google Pixel XL, iPhone 7 Plus, LG V20 and BlackBerry DTEK 60 rushed in to tap the opportunity. With little option left, Samsung had to fall back to its Galaxy S7 edge to fight a desperate flagship battle.

The company recently announced five new colour options for the S7 edge. Also, within this six months, the price has dropped to Rs 50,000 and it pinches a bit.

After using the Samsung Galaxy S7 edge for almost seven months, here is what I feel about the phone’s performance and whether is it still a good buy. This review is entirely based on the overall experience of using the device. The first time I experienced the touch sensitivity while setting up the phone, it totally amazed me. I was impressed by the next to zero reaction time of the phone.

I might be forgetting some of the other apps that I use here but I suppose this is enough to give you a gist of what the phone had to go through.

Now the verdict. The phone shows no signs of lags in whatever I tend to do on it. The multitasking is so smooth that you would actually like to push the phone to its limit every time. Stressing on this, I would like to mention that there are almost 20 apps on an average running in the background most of the time. The phone comes with Super AMOLED display which beats any phone currently in the market with its quality. It is a treat to watch movies or videos, play games and read anything anywhere on the S7 edge.

By anywhere I mean the outdoor light will not hinder the display clarity in any way. Under sunlight, you might have to increase the brightness a bit to avoid glare but that been done, the smartphone offers the best at all times. 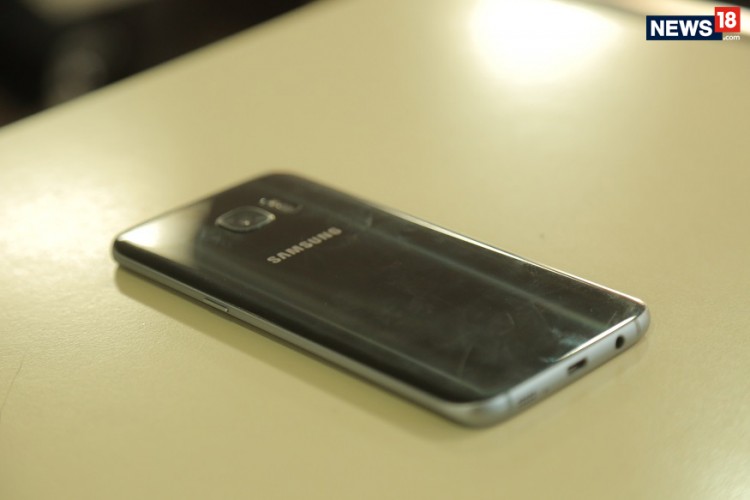 As per my opinion, this smartphone is absolutely beautiful to look at and that is part of the reason why I went ahead with it. With its elegantly curved edges and glass covering on both the sides, the phone certainly stands out from its competitors.

Though while using the phone, the back panel glass tends to retain fingerprints which obviously does not look good.

Also, the rear camera bump is a bit protruding from the mainframe. As a result, the bump gets scratched over a period of usage which again alters the look of the smartphone. Before mentioning the battery backup, I would like you to know that my phone is almost constantly playing music in the background through some online app.

With this and a range of other tasks, the phone easily delivers a battery backup of a day. Also, the Galaxy S7 edge would provide enough firepower to use it for gaming for extensive hours.While battery life is something which deteriorates with extensive usage but in my case, the fluctuation has been minimum.

Playing multiplayer games with your friends can go on for hours. While playing ‘Mini Militia’, the phone would consume around 6-7 percent battery on medium brightness over fifteen minutes of gameplay.

The phone supports Fast Charging which is able to charge the phone up to 10 percent in under 5 minutes.

Other than this, if you ever face a low battery situation, the smartphone offers two options: Power Saving and an Ultra Power Saving mode.

While the power saving mode offers the full functionality of the phone with a reduced battery usage, the Ultra Power Saving Mode brings the phone to a Black and White world and limits the usage to calls, messages and internet surfing. I have seen my phone run idle for around 30 minutes on this mode with just 1 percent battery time. 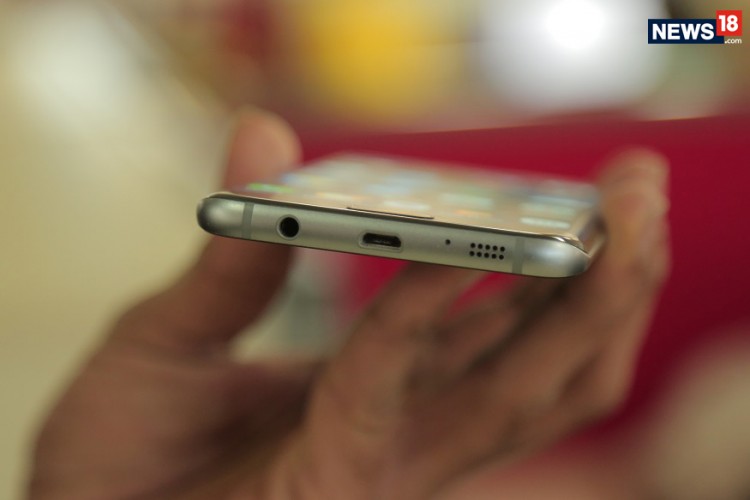 I have the 32GB version which gives roughly around 25GB of usage. While this seems to be very less, the phone supports expandable memory up to 256GB.

The downside is that the memory slot is hybrid. So, you can either run dual SIMs on the phone or one SIM and a memory card.

There are always options of cloud storage on Google as well as Samsung’s inbuilt Cloud Storage named Samsung Cloud which can be accessed in the settings menu on the phone.

Talking about the internal storage, though it seems to be enough at the beginning, I was quickly able to run out of storage space. This is primarily because of the almost infinite photos clicked from the phone. With a camera like this, it is very hard to restrict yourself with 25 GB storage.

Talking about the camera, Samsung has placed all its eggs (the ones which were left anyways) in this basket. Samsung heftily promoted the phone for its ‘low light’ photography and other camera features.

And make no mistake, this is the best smartphone camera that I have come across till date. The low light photography is true to every sense of it and clicks amazingly clear pictures even in the dimmest of lights be it in a nightclub, out in the open, under the moonlight or even in the hills with pitch dark surroundings. As a proof, almost all of my friends have an iPhone 6s and yet all the photos are clicked from my Galaxy S7 edge.

The smartphone’s audio quality is quite up to the mark and delivers a loud and clear sound quality. This being said, Samsung has not put much effort to make it stand out. There are phones in this range with better and louder audio output.

So, as long as you don’t need to play music on your phone at the maximum volume and try to vibrate your windows, the phone would not disappoint you in any way with its sound quality.

I have kept a separate section of this to mention a special in-game feature of the phone by the name of ‘Game Tools’.

Game Tools enable a small orange circle to appear on the edge of the phone while playing any game. This circle includes options of taking in-game screenshots, video recording, blocking any alerts during game (very helpful), minimising the game screen and locking the touch panel keys.

While playing, I enable the ‘no alerts during game’ option which hides any message notifications. The incoming call are displayed through a small drop down bar with the name of the caller flashing on it. This also disappears in under 10 seconds if no actions are taken on it. The Galaxy S7 Edge contains a plethora of special features that enhance the convenience of its usage.

This includes Reduced Screen size (For single-handed use), One hand input, Pop-up view gesture, Always on display, Split screen and others which I have not used much.

Most of these features will allow you to operate the phone single-handedly and will help in multitasking quite easily. 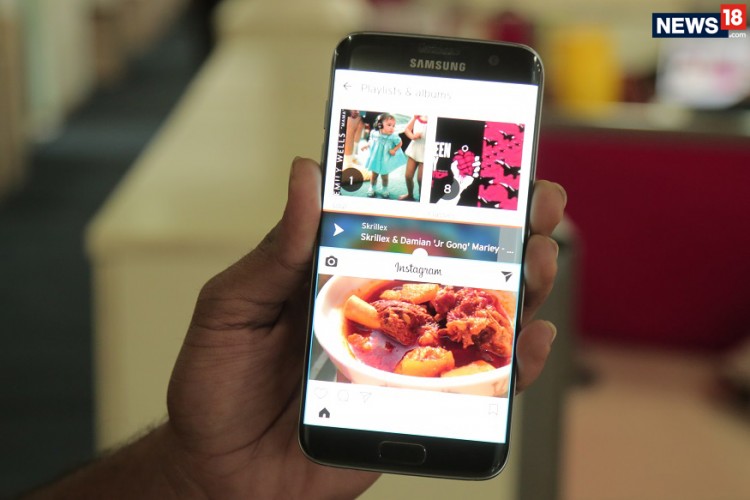 The smartphone’s edge in itself, is one of the most powerful widgets you will ever come across.

The panel’s side, position, size, transparency can be set and it can be used to accommodate a range of panels as per the user’s convenience.

As for my phone, the Edge panel contains Contacts (People), Yahoo News, Apps and Tasks. Other options include My places, Yahoo Finance, Yahoo Sports, CNN, Quick Tools, Internet, S Planner and Weather. There is also an option of downloading more from the store.

Other than this, the edge shows notifications as they arrive and also lights up in colours if the phone is kept face down when someone calls. I got to know about the inbuilt store by the name of My Galaxy only after I started exploring the phone and it really came to me as a surprise that Samsung did not advertise much on this segment.

Just like the My Jio app, this store has plenty of options for you to ignore other third party apps.

Though I have not used this much, there are regular offers and discounts available for Samsung Galaxy S7 Edge users on the app.

As an exclusive offer for Samsung Galaxy S7 Edge buyers, Samsung Gear VR headset was offered to me at a discounted price of Rs 1,999. This was my first attempt at Virtual Reality and it totally blew my mind.

I used the VR extensively for the first two months, downloading content from the limited video options on the Oculus store. This included trailers for movies like Conjuring 2, 360 degree video shoots and a ’Suicide Squad’ game.

Though I got bored of the whole experience after two months and now the VR is just lying in a corner. Having experienced something new for awhile, it now takes a lot of motivation to take out the Gear VR and then attach it to the phone every time. To me , it just seems to be an avoidable hassle for now.

About the headset, now that I have experienced other headsets as well, the Samsung VR headset seems to be much more sophisticated than most of them.

For starters, it sits perfectly on your head with a strap holding it in place. The phone is mounted by attaching it to a USB connector within the headset.

The clarity is not too good but probably the best that you can expect from a VR at this time. Keeping the phone’s performance in mind through these months, it is recommended for anyone with this budget to get this beast of a phone. Of course, there are newer options like the iPhone 7 Plus, Google Pixel XL and others, but the Galaxy S7 edge still continues to be the champion in the smartphone battle.

Also read: iPhone 7 Plus Review: This iPhone Will Be The Apple Of Your Eye