The Samsung Galaxy S9+ is a perfect flagship to cater to all your smartphone needs. The Apple iPhone X is its only competitor but it’s expensive. Read the in-depth review.

The Samsung Galaxy S9 and S9+ is now here in India. And after using the Samsung Galaxy S8 and Galaxy Note 8, the new Samsung S9+ offers a mixed feeling. The Galaxy S9+ is a classic example of Samsung taking reviews and consumer feedback serious. Of course, this is the best Samsung phone in the market right now and probably will win the best 2018 Android flagship as well, given that most players are busy copying the iPhone X notch.

Last year, Samsung had pushed the smaller and more affordable Galaxy S8 through marketing lenses. The bigger S8+ had made little sense last year. But this time, the tables have turned. The more affordable Samsung Galaxy S9 has taken the backseat while the Galaxy S9+ is basking in all glory, both in the spec-sheets and marketing rush.

After using the Samsung Galaxy S9+ for a couple of weeks. Here is what we think about the phone.

There is no major change if you compare the Galaxy S8 with the S9 or the Galaxy S8+ with the S9+. That’s a good thing in a way. Samsung has retained the appreciations and have worked on the criticisms. While the design is very similar, the new Galaxy S9+ is slightly broader and shorter when compared to the S8+. It is also a bit thicker and heavier than the S8+.

But despite sounding a bit bulky on paper, the Galaxy S9+ is easier to use on a daily basis and feels more compact. The older S8+ felt unnecessarily longer and somewhat needed some getting used to, especially the awkwardly placed fingerprint sensor. Talking of which, the fingerprint sensor is now at a much convenient position just under the dual-lens setup. The overall, glass and metal body build quality is top-notch. Being an all-glass phone, the device easily attracts fingerprints. But don’t worry about scratches as Samsung has added a free transparent soft-cover in the box.

Coming to the display quality of the Samsung Galaxy S9+. There are no changes when compared to the S8+. The Galaxy S9+ offers the same 6.2-inch Curved Super AMOLED display with a QUAD HD+ resolution of 2960 X 1440 pixels with 18:5:9 aspect ratio and 529 PPI pixel density. It may be exactly the same but it is the best you can get in a smartphone. You just can’t have any complains with the display.

The Galaxy S9+ comes with a dual-lens rear camera (12MP+12MP) with Dual OIS. There is a wide-angle lens with a dual aperture of f/1.5 and f/2.4 and a 12MP auto-focus sensor. The telephoto lens has an aperture of f/2.4 and a 12MP auto-focus sensor. The front camera is the same 8MP sensor with A/F and f/1.7 aperture. The camera interface is new. You get the bookeh effect from “Live Focus” mode on both front and rear cameras.

The rear camera of the Samsung Galaxy S9+ is the best right now in smartphones that money can buy.

Samsung says that the camera is built for low lighting photography with dual aperture and multi-frame noise reduction. It’s claimed that the new phones offer 30% less noise than the older Galaxy S8.

Other camera features include super slow mode at 960 FPS. Interestingly Samsung has added an “auto slo-mo” feature which automatically detects motion in a still frame and records a slow-motion video of the moving object in the frame. You can also use these slo-mo videos as a GIF or even as a desktop wallpaper. 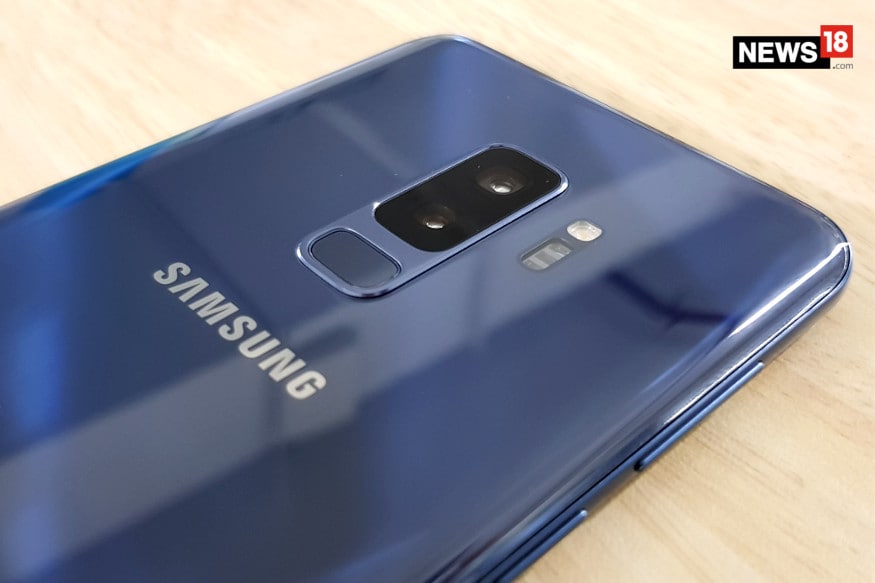 Closeup of the bezels and front camera of the Galaxy S9+. (Image: Debashis Sarkar/ News18.com)

Samsung has taken advantage of the smart camera to make its assistant called Bixby even smarter. Bixby now offers Live translation, names unknown locations and even show calories in food. All you have to do is just call the “Bixby Vision” option the camera UI and point your camera to get the information. Now coming to Emojis. Samsung has included. Augmented Reality (AR) emojis in both the S9 and S9+. This feature is similar to the one you get with the iPhone X, popularly called “Animoji”.

AR Emoji is just for fun and not something you will want to play with always. Also, Bixby Vision is like Google Lens with language translation and simply doesn’t deserve a dedicated button.

You can create a 3D picture of yourself and customise it to make realistic emojis of your own expressions. The feature will available directly on the keyboard and will support all social media platforms as it’s created as a GIF. You can send these AR emojis as a GIF to any other smartphone. The performance of the Exynos 9810 processor easily matches that of the Qualcomm Snapdragon 845 if not better.

The device is powered by the latest Samsung Knox security solution. Iris, fingerprint and face recognition was already there and Samsung has now added something called an “Intelligent Scan” which uses both Face and Iris to unlock the phone depending on the surroundings.

After perfecting the camera, Samsung has simply offered the best audio experience in a smartphone. And there is a huge difference in the audio when compared to the Galaxy S8, S8+ or the Note 8. This difference can easily felt either with or without earphones. There are dual stereo speakers tuned by AKG (by Harman) on both flagship Galaxy phones now offering Dolby Digital 360 surround sound experience. Of course, the 3.5mm headphone jack is also there and you great pair of AKG earphones too.

After perfecting the camera, Samsung has simply offered the best audio experience in a smartphone.

Samsung has paid great attention in the audio department. You can customise the sound quality and effects of the entire phone and even adapt sound as per age. There is a dual speaker setup in the Galaxy S9+.

The Samsung Galaxy S9 and S9+ are IP68 water and dust resistant with 4G VoLTE connectivity, Bluetooth 5, dedicated dual-SIM card slot, NFC, Samsung Pay, DeX support, USB Type-C port among others. All the software and connectivity goodies in the Galaxy Note 8 are there in the new Galaxy S9 and S9+.

The battery life continues to be a problem. You will, of course, have to charge the phone every day. But don’t be surprised if you need to charge the Galaxy S9+ twice a day if you happen to record a lot of videos, play games and is constantly connected to Wi-Fi. There are several battery saving modes that might save the day for you but you will have to compromise on some aspects. While the device supports fast charging, you will have to spend around 2 hours to get the device fully charged. Also, the battery initially takes time to get charged.