Home » News » Tech » Samsung Galaxy Tab S7 FE Review: You May Stop Searching For An Android Tab That Can Be A Laptop Too
10-MIN READ

Samsung Galaxy Tab S7 FE Review: You May Stop Searching For An Android Tab That Can Be A Laptop Too

Every year, we say this. Yet nothing changes. Just where are Android tablets? Forget genuine Apple iPad rivals at the higher end of the price spectrum. But more affordable choices for someone who wants a capable entertainment and gaming device which can double up as a work machine with a keyboard attached. At least to a certain extent, in terms of performance. Samsung seems to be the only brand that is still valiantly holding the fort for Android tablets in a space increasingly overrun by the various Apple iPad options. Last year’s Samsung Galaxy Tab S7+ and the Galaxy Tab S7 really managed to get things as close as possible for Android. This time, there is an addition to that tried and tested formula. The Samsung Galaxy Tab S7 FE joins in, to make it a troika of options for you, depending on how much you want to spend. Sticking with the display for a moment, and it isn’t hard to appreciate the real estate that’s available with this large 12.4-inch screen. Yet that is where most similarities with the Galaxy Tab S7+ end. The Galaxy Tab S7 FE has a standard LCD display instead of an AMOLED and a slightly lower resolution of 2560 x 1600 pixels. The size is matched, but surely the accountant stepped in at some point to keep the entire mission’s cost in check. Nevertheless, from what I experienced from a varied mix of video calls, reading, web browsing, editing photos, video streaming on Netflix and some Live cricket streaming on Sony Liv, this screen more than ticks off the checklist and doesn’t really fall short at any point. As long as you focus more on the experience and don’t pre-reserve an option based on the spec sheet. It is bright, so much so that I often had to manually dial down the display illumination a notch. It isn’t an HDR screen, but that really didn’t take much away from the time I spent watching Sick Note on Netflix and Clarkson’s Farm on Amazon Prime. The ability to distinguish colours helps, and so does the richness. As does the ability to keep video content on the nicely illuminated and come through with good depth. 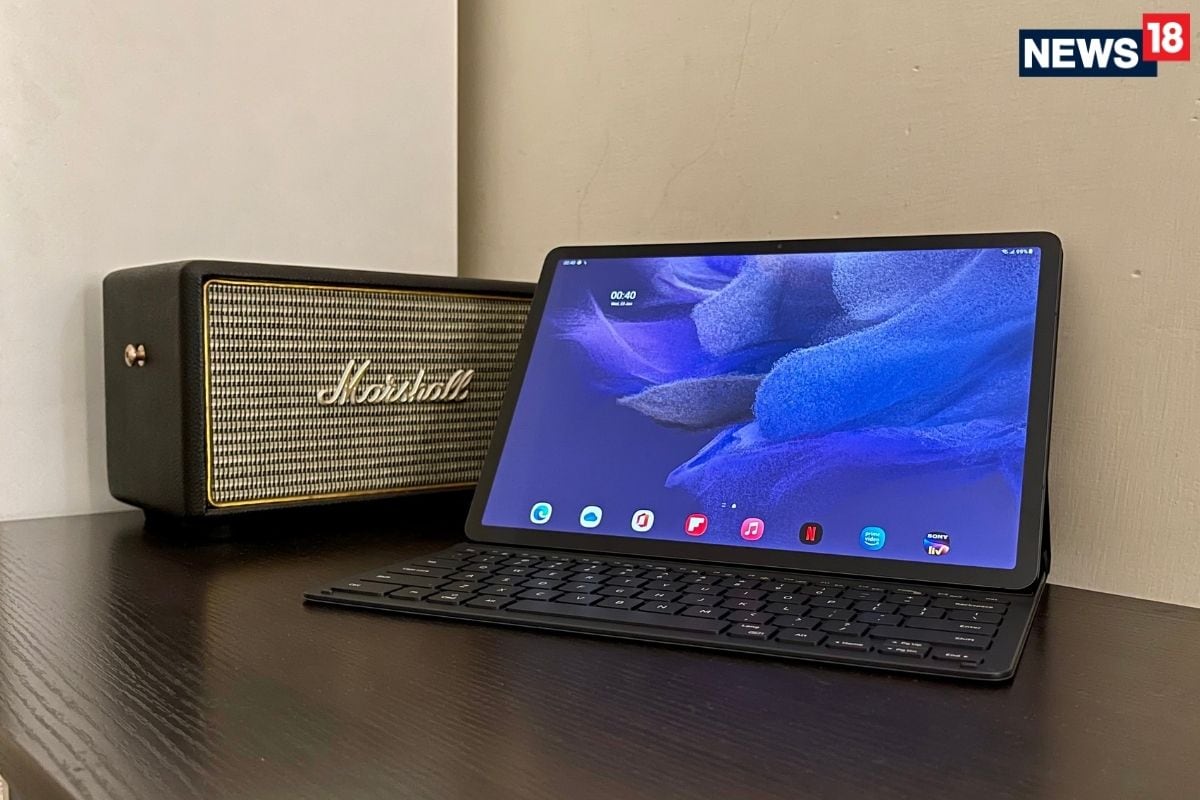 We have already established that the similarities between the Samsung Galaxy Tab S7 FE and the Galaxy Tab S7+ perhaps ended with the display size. Though there will be more later on the design front. But most definitely, there is a definite distinction between the power package available for both tablets. The Galaxy Tab S7 FE gets the Qualcomm Snapdragon 750G chip as the beating heart of what you experience. No slouch in its own right, yet you shouldn’t expect the Snapdragon 865G sort of performance. To be fair, you wouldn’t feel this is inadequate, as long as you don’t expect this to punch above its weight. With a dozen tabs open in Microsoft Edge for Android, Google Meet call, working on a Microsoft Office document and once the virtual catch-up was done, switched to Spotify for music streaming and the Edge tabs became 2x, and yet the Galaxy Tab S7 FE didn’t feel the load. It just didn’t feel any strain, and app switching as well as the sprightliness with which it loaded Twitter at the time, was fairly impressive. Mind you, even the slightest of stutter on such a large display would be immediately noticeable, but I have nothing to report on that front. The Galaxy Tab S7 FE simply keeps shuffling along, and you’ll have absolutely nothing to complain about. You must be wondering how this stacks up against the Apple iPad Air, which is thereabouts too, with prices starting Rs 54,900. The thing is, the A14 Bionic chip that powers the iPad Air, is completely in a different league, in the performance stakes. Yet, I’d assume that you’re considering the Galaxy Tab S7 FE because you want something that runs Android, and don’t want an iPad with the iPadOS instead. And within the Android ecosystem, I don’t really see any competition for the Galaxy Tab S7 FE, particularly not with this large screen size and the versatility of a laptop, at this price point. Having said that, I’d recommend spending that little extra for the 6GB RAM option here too, which gives that critical headroom for better performance and longevity. And for the creatively inclined, the S-Pen included in the package really adds value. 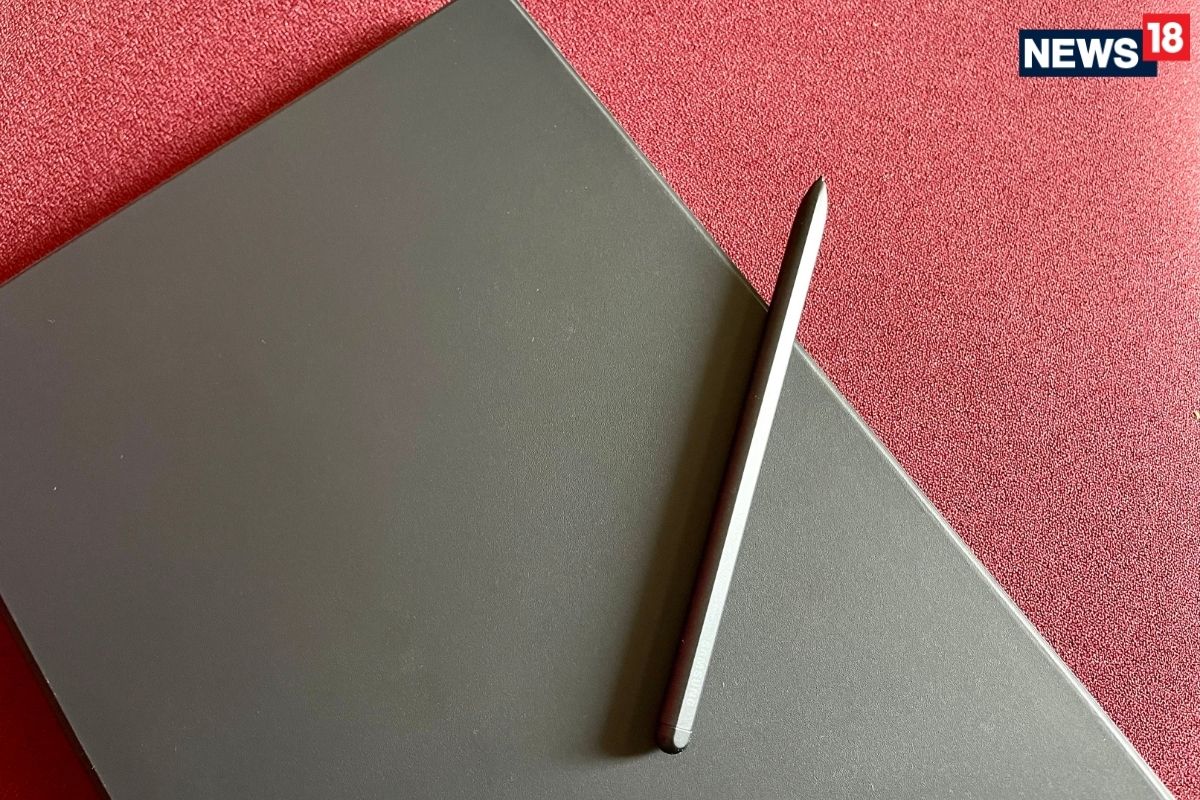 I also didn’t notice the back panel heat up after each session of the diverse use case it was put through. In fact, keeping the heating in check also has a positive impact on the battery life. This has the same battery size as its more expensive sibling, which is a 10900mAh battery pack. I did notice this time and again that when set at lower brightness settings, this display drains the battery a tad more frugally than the Galaxy Tab S7+. These could be the differences in the display tech as well as the number of pixels that need to be powered, but the overall gain is that you’ll probably be eke out an hour or so more in comparison. The Galaxy Tab S7 FE supports 45-watt fast charging, which makes it a bit irritating that Samsung has only bundled a 15-watt charger in the box. For a productivity device, this doesn’t derive the best experience from the potential that is at play. 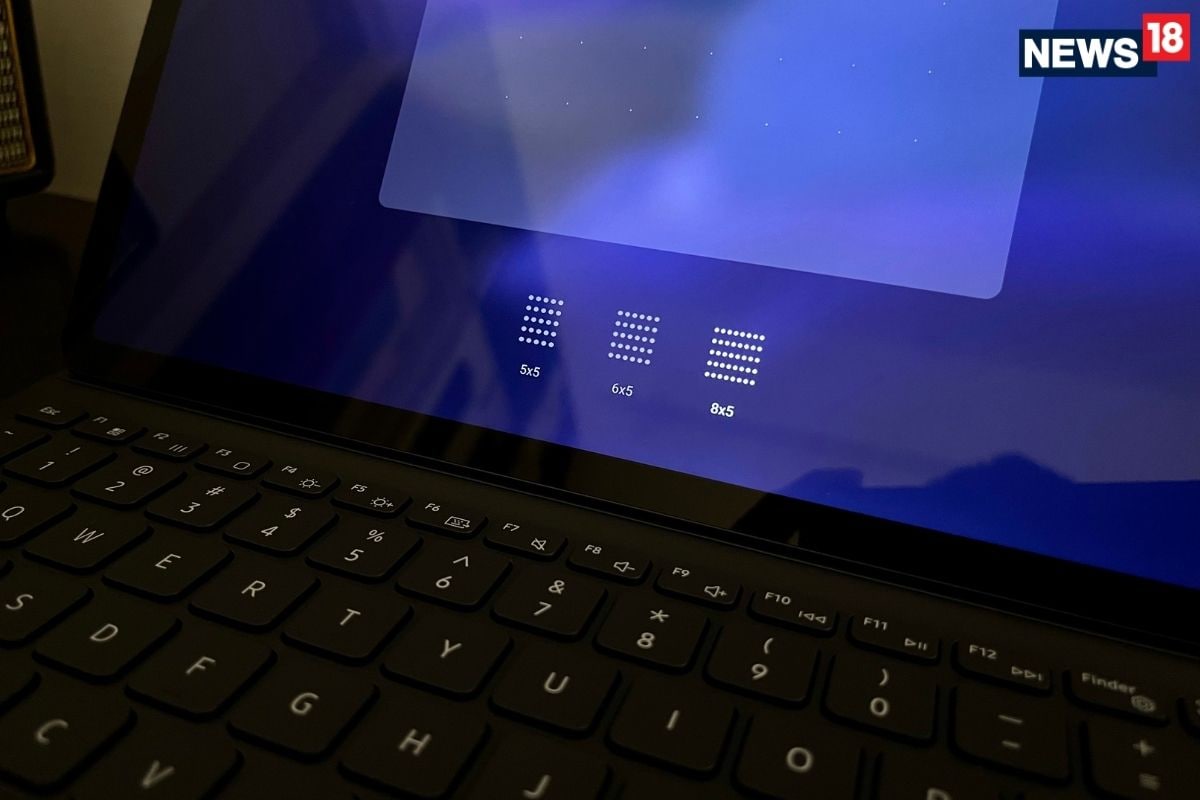 With the Samsung Galaxy Tab S7+ last year, I had noted how Samsung keeps making these subtle tweaks to improve One UI. The same story continues here too. I have often complained that a Samsung Galaxy phone’s One UI stretched on a tablet display real estate looks stretched, and the icons look too big. Samsung heard my complaints (I’d assume they heard me and would like to take some credit for that!) and the updated One UI that the Galaxy Tab S7 FE runs now has more grid display setting options, and that makes icon placement closer to each other on the home screens and the app drawer. The ‘8X5’ option when you long press on the home screen and tap on Settings, makes a world of difference. Everything suddenly looks better. 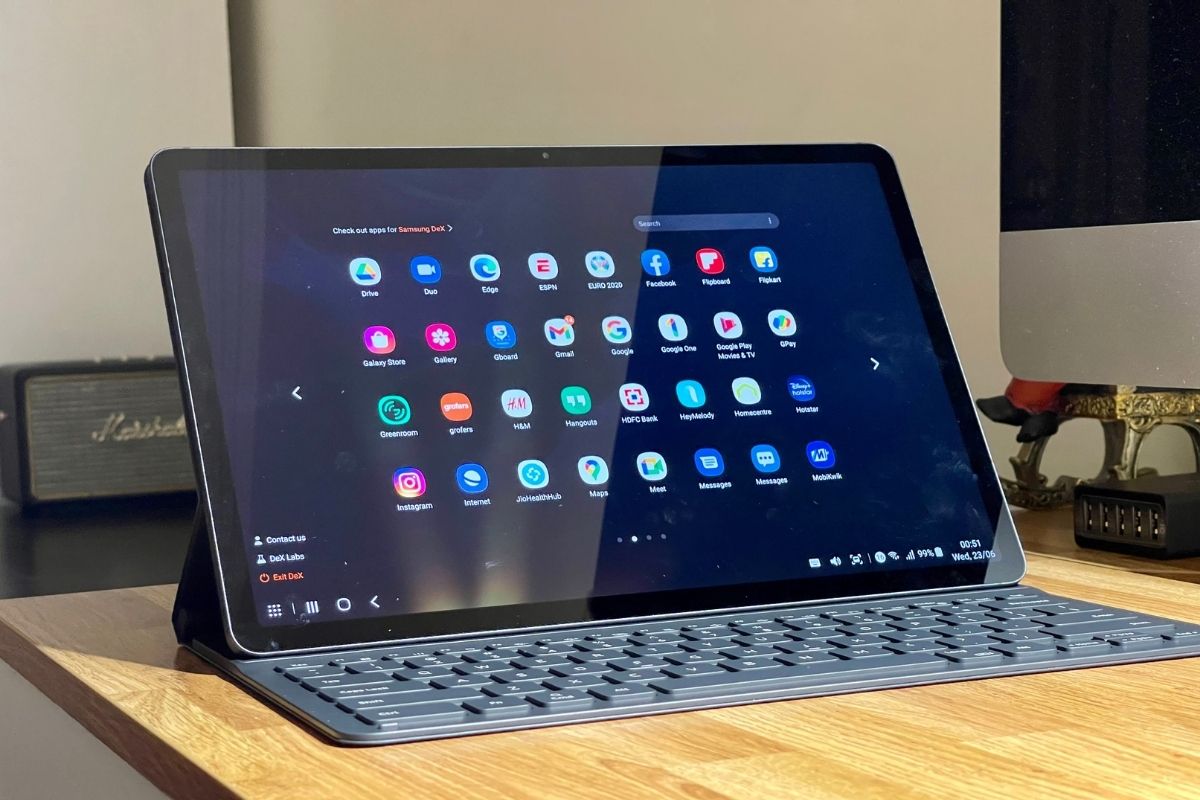 The party piece continues to be the productivity mode, called DeX. This is Samsung doing what Google should have done, many years ago, for tablets. Snap on the keyboard if you have bought that, or connect it to a larger display with HDMI, and the DeX mode can be automatically activated. This is trying to replicate desktop interfaces we know them, inspired by the Windows PCs we have used for years. Complete with a start button, a desktop and a taskbar. All your Android apps, irrespective of whether they are willing to or not, are rendered in a desktop-esque style. Great if you want to work on documents, emails with some switching between cloud storage and virtual communication with team. Samsung has done a really good job with DeX, and you can even create a desktop complete with icons etc., and every time you get logged into DeX, that’s how you’ll see your desktop. Great if you wish to keep DeX as the quick solution for the day at work and when you exit, the standard Android interface can be primed for play and relaxation apps. The Samsung Galaxy Tab S7 FE has simply carried forward the good looks that run in the family. It is largely the same in terms of the design, the dimensions and the overall look as well as feel, as the Galaxy Tab S7+. Except that the Galaxy Tab S7 FE is a tad thicker at 6.3mm, instead of 5.7mm. That’s still thinner than the Samsung Galaxy Note20 Ultra which is 8.1mm thick, just for perspective. The one visual change is that while the Galaxy Tab S7+ had a glossy black stripe running down the camera module, the Galaxy Tab S7 FE doesn’t add that element. You can have this in Mystic Black and Mystic Silver colours. Quite frankly, this looks absolutely gorgeous as it is kept on your workstation or the bedside table or on the coffee table. A lot of that has to do with the flat slab design, which looks really good. Mind you, this catches a lot of fingerprints at the front and back, and that’s mighty annoying. 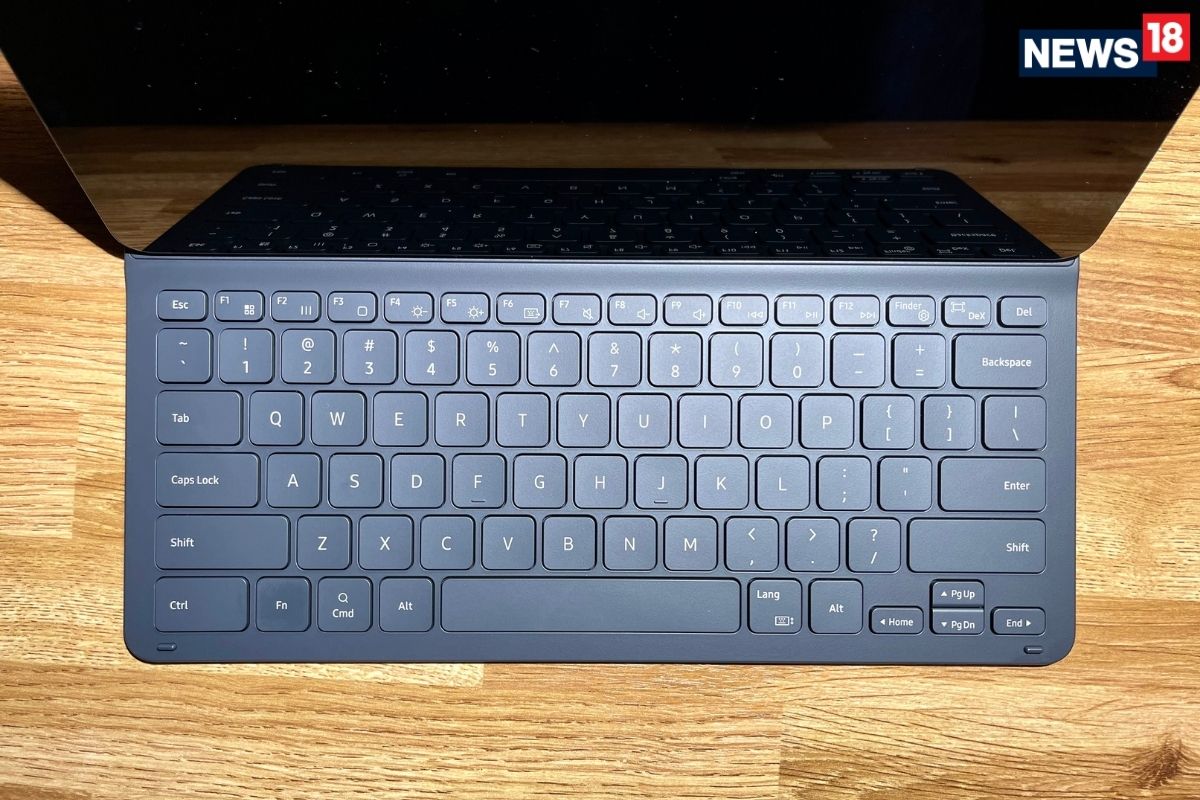 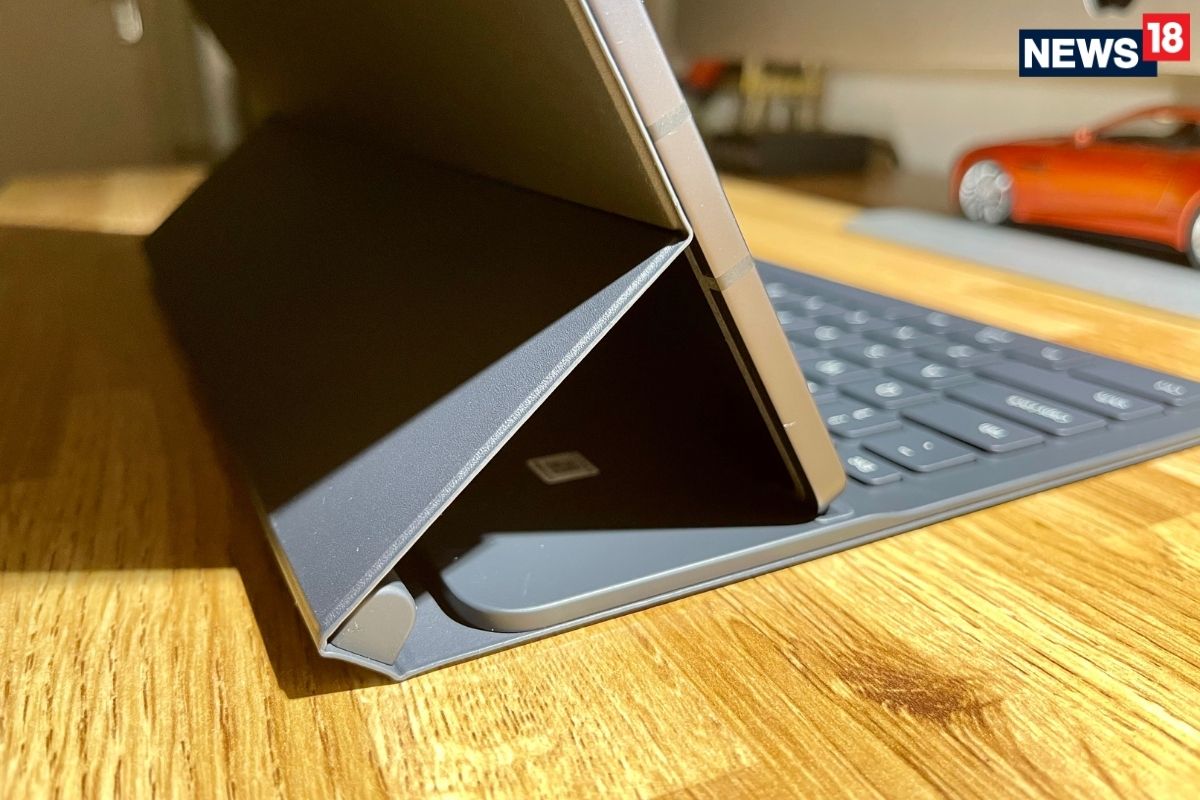 Do remember, the keyboard accessory is optional, and you’ll need to purchase it separately. If you feel that your new tablet will do some of the work that your laptop otherwise does, then spending extra may make sense. The S-Pen is bundled, and that really adds value. Particularly if you are someone who likes to jot down notes, doodle or sketch. There is no need to buy an extra accessory, and that’s certainly an advantage on the Apple iPad line-up, if ever there was one. The biggest takeaway for the Samsung Galaxy Tab S7 FE is the undoubted advantage of further reducing the entry price point into the S-series tablet line-up. Yet it doesn’t change the tried-and-tested ingredients of a large display and a keyboard accessory that help this double up as a work machine too, when needed. A notch down comparatively on the much higher priced Galaxy Tab S7+ and that’s to be expected. Yet, there really weren’t any performance shortcomings or experience niggles that I’d have to call out. As long as you work within the limitations of this processor and RAM configuration, you’ll be served well. And it is the software side of things that really keep improving, device by device, testified by the minor tweaks to One UI and DeX. There just aren’t enough Android tablets out there that we would recommend, and Samsung continues to make a very logical case for why you anyway shouldn’t bother with a shortlist before buying.