Samsung Galaxy Watch Review: More of The Same, And Yet Completely New

The Galaxy Watch retains a lot of the family elements from previous Samsung smartwatches, but yet is a fresher take on the entire concept.

It is not easy to make smartwatches. No, the watch makers are not at fault. We are. As consumers, we want the smartwatches that we buy to tell us the time, be a secondary phone screen, track our fitness and make coffee for us when we demand it. Yet, we want these to be as simple as a chronograph. That, unfortunately, is a paradox. It is extremely unlikely that a small screen on your wrist can be your watch, your butler, your chauffer and your pilot, and yet be as simple as an apartment of a middle-class household. It is because of our confused expectations, that smartwatches often disappoint. Samsung, to its credit, is taking another stab at the smartwatch space, with the Galaxy Watch. This is priced at Rs24,990 for the 42mm version and Rs29,990 for the larger 46mm variant. This, in many ways, goes up against the Apple Watch—which is now available in 40mm and 44mm sizes. It must be said that Samsung has taken multiple stabs at this space before as well—there is the Gear S3 Frontier, the Gear S3 Classic, Gear S2, the Gear S2 Classic, Galaxy Gear, Gear S and so on, to name a few.

You have the option of two sizes and three colour options, if you want to buy the Galaxy Watch. The smaller 42mm option can be had in the black or the rose gold colour variants, while the larger 46mm version comes exclusively in the silver colour at the moment. We are a tad perplexed that the larger of the two Galaxy Watch variants has only one colour option, and that rose gold as possible choice might have made a few more folks sit up and take note. That said, the Galaxy Watch feels very well built. The aluminum, the strap and the overall design all are top notch. Samsung claims “military standard durability”, and that shows when you hold the Galaxy Watch and wear it. This is water resistant as well—the bare minimum you would expect from a smartwatch now. That said, the Galaxy Watch isn’t perhaps the watch you would want, if you are looking for something really sleek—neither of these variants are sleek and will appeal more to those who like chunky watch dials instead. The other side of this coin is that the Galaxy Watch will surely be noticed when you are out and about with friends—and in a complimentary way.

The 42mm Galaxy Watch has a 1.2-inch display while the 46mm Galaxy Watch gets a slightly larger 1.3-inch display. These are the Super AMOLED variety, which means vividness will never be in short supply. What you see on this screen, and how it looks, is quite impressive. There is a generous dollop of sharpness, which makes text easy to read. Overall, this screen looks quite vivid, given the inky blacks help other colours look better. Also, the way the on-screen interface has been developed helps elements pop out nicely. The one difference with the Apple Watch is that the screen itself sits a bit recessed as compared with the bezel around it, and your finger will crash against the metal every time you do an elaborate swipe gesture—on the Apple Watch, the display glass cascades beautifully into the sides, and the finger gets used to gliding during interaction with the watch interface. Samsung has retained the rotating bezel, also seen on earlier smartwatches. Instead of stabbing the screen for certain tasks, you can rotate the dial to control certain functionality of the software that runs on the Galaxy Watch—Samsung’s own evolution of the Tizen operating system. The compatible functionality includes access to notifications, for instance.

As you would expect, the Galaxy Watch does its bit as a second screen for your smartphone. It will notify you when you get a new notification on your phone, with the ability to react to them. It has certain apps running on the watch itself. It will track your fitness. If you wish to use Samsung Pay to make a payment at an establishment, it allows the tap-to-pay feature too. That said, Tizen is definitely competing with Google’s Wear OS and that poses a slight problem—the range of apps, the vibrancy of the ecosystem and the visible developer support is still not close to the sheer variety that Wear OS offers. It might take time for Tizen to reach that level. The interface takes a bit of getting used to, and if you haven’t used a Samsung Gear watch before this, you will take some time in getting used to the layout. However, this is nothing unsurmountable, just a matter of persistence. 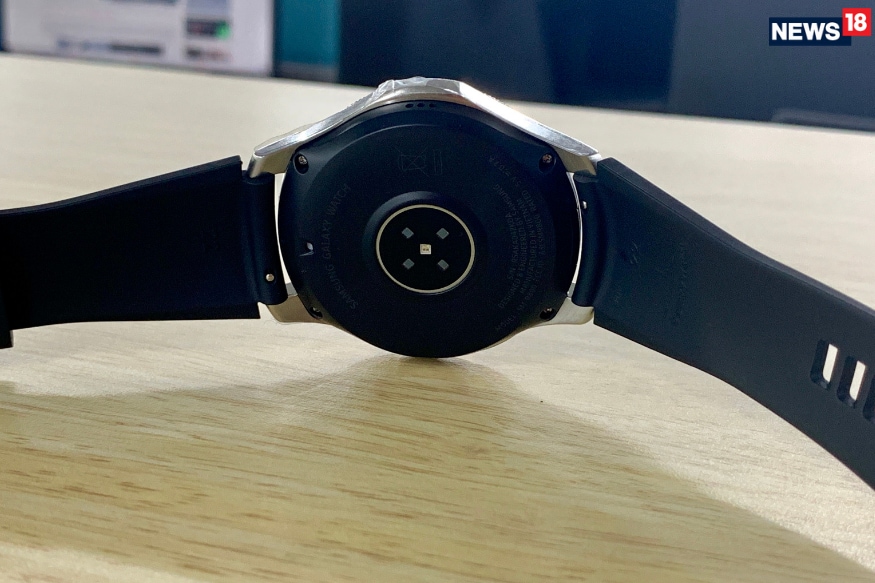 Fitness tracking is a major chunk of what a smartwatch these days is supposed to do. Samsung has ensured that the Galaxy Watch goes beyond just tracking your steps all day. It monitors your heart rate and can track more than 30 different types of workouts. It will also prompt you at regular intervals to get up and walk around a bit, if it detects you have been sitting for a considerable amount of time. It also urges you to take deep breaths at some point of time, though we aren’t entirely convinced that wearables can actually track stress levels. The fact that Samsung claims this is water resistant up to a depth of 50 meters for as long as 10 minutes, swimming is also an activity that can be tracked using the Galaxy Watch. A lot of smartwatches are now adding the ability to automatically detect when you may have embarked on an exercise session, and the GPS enabled Galaxy Watch also starts tracking it that immediately, including running, cycling and elliptical. However, do note that this can always be a bit of a hit or miss—and this is true for just about any watch. All the data is sent back to the Samsung Health app on your phone.

As we culminate our time with the Samsung Galaxy Gear watch, we come away somewhat perplexed. There is no doubt that the Galaxy Gear undercuts the Apple Watch significantly in terms of price, but at the same time, it manages to look extremely premium and totally appropriate to wear at work, for an evening get-together or for a weekend jaunt to the mall. However, the software still isn’t up there in terms of the variety of apps that the Apple Watch and indeed the other Google Wear OS watches have spoiled us. Samsung has definitely upped the game, and the Galaxy Gear is the best-looking smartwatch they have ever made. The software, in due course of time, should be able to back the hardware and the physical elements of the watch.