Samsung Galaxy Z Fold2 5G Review: If You Are Rich Enough, This Is An Absolute Winner

The Samsung Galaxy Z Fold2 5G learns from the Galaxy Fold from last year, packs in more power, a more robust hinge, undeniable productivity goodness and the promise of the future, which may be all about foldable smartphones.

I had said it last year, and I’ll say it again. The foldable phones that we see and use here and now, are telling us exactly what most smartphones will be like, in the future. Not tomorrow. Not this year. Not even next year perhaps. But in a few years’ time, mark my words, you will be using a foldable phone. Or considering buying a foldable phone. Last year, when Samsung’s journey began with the first generation of the Samsung Galaxy Fold, it wasn’t the prettiest of starts. Mind you, what Samsung did next shows character. Instead of going into a denial mode and releasing videos of how everything is fine and that anomalies in the screen are normal (looking at you, Moto), they went back to the drawing board. The refreshed first-generation Galaxy Fold came out as something quite special. A phone that had our collective attention, whether folded or unfolded. The successor has now landed. The Samsung Galaxy Z Fold2 5G. The name is a mouthful, but that really has never been a problem for cool products.

Let us first start with the price. The Samsung Galaxy Z Fold2 5G will cost you Rs 1,49,999 which is a pretty penny, whichever way you look at it. That being said, this year’s phone requires considerably less monetary outlay than the Galaxy Fold from last year. That was priced at Rs 1,73,999. There are reasons why Samsung has been able to achieve a lower price point for this year. First is the comparative economies of scale, which 12 months allows you to achieve. Secondly, while the Galaxy Fold was sold in the 12GB RAM and 512GB storage variant, the Samsung Galaxy Z Fold2 5G is available in the 12GB RAM and 256GB storage option. There is also the 5G bit added, mind you, which adds to the future proofing. Last but not least is the small matter of the wireless earbuds. While the Galaxy Fold last year bundled the Samsung Galaxy Buds wireless earbuds, the Galaxy Z Fold2 5G makes do with wired earphones. The Moto Razr Is NOT Competition

Let me get one thing clear from the start. The Samsung Galaxy Z Fold2 5G does not have any like-for-like competition in the Indian market. No, the Moto Razr from last year or the Moto Razr 5G for this year are very different form factors. And that we have established that the Samsung Galaxy Z Flip tackles those very effectively with a significantly lower price tag as well.

Now that the history lesson is out of the way, let us get down to the matters at hand with the Samsung Galaxy Z Fold2 5G.

What a difference a year makes

The Samsung Galaxy Z Fold2 5G has significant hardware and design upgrades over the Galaxy Fold, which translates into an even slicker and immersive user experience. For starters, you will immediately notice that the cover display, also the smaller of the two screens, is now bigger than before. Instead of 4.6-inches earlier and with really thick bezels above and below it, this year’s Galaxy Z Fold2 5G gets a much larger 6.23-inch display there. That, in itself, is a full-fledged smartphone experience waiting for you. Open, rather unfold the Samsung Galaxy Z Fold2 5G and you get a 7.6-inch screen instead of a 7.3-inch screen. And the very fact that this is now an Infinity-O display variation called the Infinity Flex, means the front facing camera is now a tiny circle much like the Samsung Galaxy Note20 Ultra, and that eliminates the thicker bezel the predecessor hosts.

The smartness continues as is—in the sense that if you are using an app on the cover display and decide to unfold the Samsung Galaxy Z Fold2 5G, the app seamlessly switches to this larger screen. If it’s a YouTube video that you are watching, that transitions to the even bigger screen too. What also helps is that more apps now support this sort of real estate in the world of Android apps, which makes everything look better and fit better. 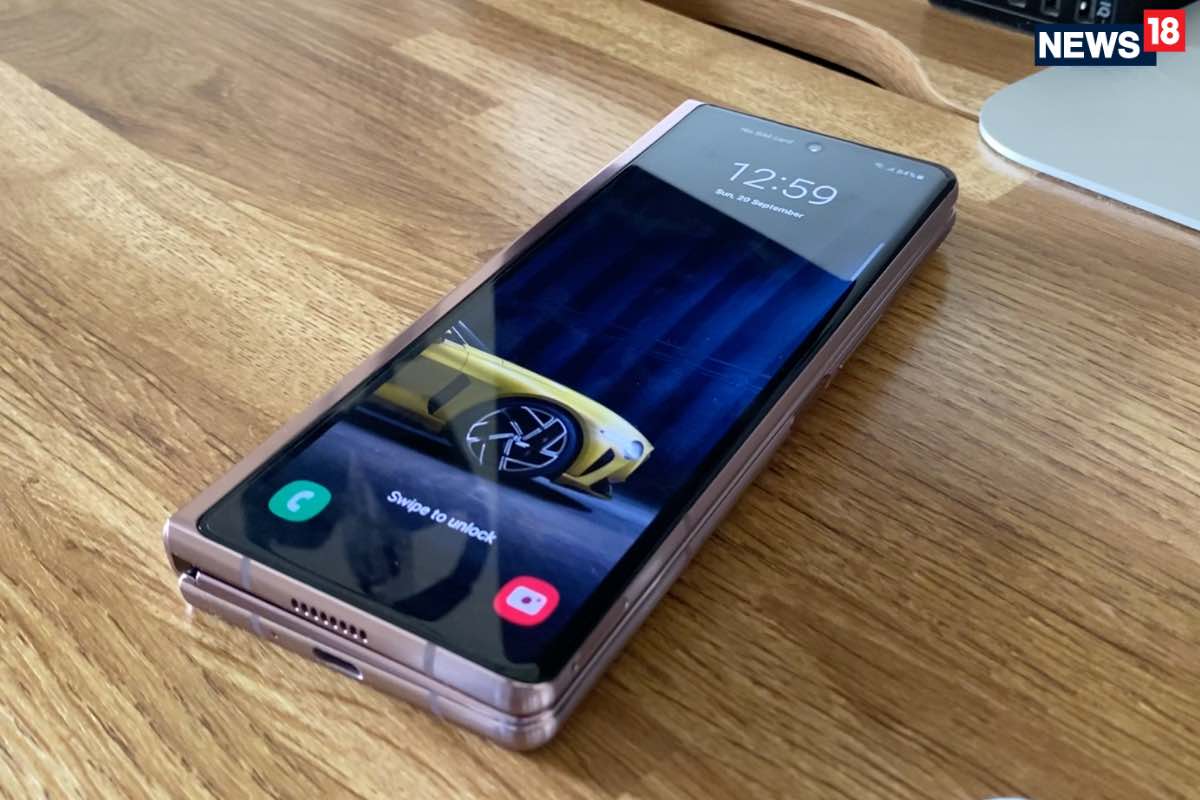 This Dynamic AMOLED 2X display uses a low-power Adaptive Frequency tech that can reduce the power consumption of OLED displays by altering the refresh rate, depending on what is on the screen at the time. It alters the refresh rate automatically to reduce power consumption as much as possible. It really doesn’t need to consume the same amount of battery with the higher refresh rate while viewing photos as it would while watching a video. This screen can go as low as 11Hz, which will translate into significantly better battery over the span of a day as you use the Samsung Galaxy Z Fold2 5G as a work phone switching between different apps and tasks. You will never notice any changes in brightness or any sort of flickering when this dynamic switch happens, which is a testament to how smoothly the transition takes place, often more than once every few seconds.

The display also feels less “soft” than last time out, even though the layer that you are touching is plastic. Do not remove the factory-installed screen protector, but I do like the feel of the composition changes in the sandwich of glass and plastic that makes up the Samsung Galaxy Z Fold2 5G’s foldable display. The crease is also less profound as you use it—or are my eyes playing tricks on me?

While the overall footprint and dimensions of the Samsung Galaxy Z Fold2 5G remain largely the same as the Samsung Galaxy Fold, give or take a few, there are some significant changes in the overall construction. The hinge for instance, now has a newer design and it is more discreet than before. This also has the cam mechanism with a smarter lock-in implemented, that allows you to keep the phone unfolded at pretty much any angle you want. This is great of you unfold the phone like a laptop and place it on a desk, for video calls on Google Duo, Zoom and more. As before, you can use this even larger real estate of the unfolded Infinity Flex display to open more than one app side by side. For instance, you can have three apps open side by side sharing the same display real estate or have some open in the pop-up format with the flexibility to drag them anywhere on the screen. You can save app sharing layout also which means you can always open three apps in the same screen sharing configuration every time—that’s great for productivity uses where you could have an email app, a web browser and perhaps a third workflow app open together every time.

This Has Power, And Then Some

Chugging away under the hood is a Qualcomm Snapdragon 865+ processor with 12GB RAM. You cannot and will not be able to use that much power as most phone and even part laptop replacement use cases. Everything just feels incredibly slick and smooth, and you’ll probably not realize you have 22 apps open at the same time! A lot of the hardware’s brilliance is matched by the One UI 2.5 which while visually remains the same as before for the most part but has seen significant improvements in terms of power and RAM management. All that translates into less utilized resources, less clutter and better battery life.

Speaking of which, the Samsung Galaxy Z Fold2 5G continues with the tried and tested formula of combining two battery blocks divided each side of the hinge, to work together. This time around, the capacity of 4,500 mAh is also more than last year’s Galaxy Fold. Do not worry about carrying a charger or have any sort of battery anxiety. This phone will easily last you a day, even if you spend most of the time over-using the phone just because the screen is so brilliant you cannot take your eyes away from it. A Case Of Two Distinct Halves

The Samsung Galaxy Z Fold2 5G has in total 5 cameras. There is a triple camera system at the back, which is basically three 12-megapixel sensors, each for wide, ultrawide and telephoto. The larger pixel sizes compared with the Galaxy Fold’s triple camera setup means that overall there are significant improvements in the photos that you click. From the outset, detailing is fantastic, and colours are rich and well distinguished. The dynamic range is good and so is the sharpness around the edges. Low light photos also come out well, though you need to manually focus at times to get the subject properly locked in. Yet, it is hard to understand why the Galaxy Z Fold2 5G’s cameras are definitely a step down, at least on the megapixel front, compared with the Galaxy Note20 Ultra. On the spec sheet, this sort of difference (the Galaxy Note20 Ultra packs in 108-megapixel + 12-megapixel + 12-megapixel cameras) just doesn’t look right.

Above the cover display and integrated into the unfolded main display are 10-megapixel cameras—you have the flexibility for selfies and video calls in either mode. Both of these modules are identical to the front camera in the Samsung Galaxy Note20 Ultra, and I can say from my experience of shooting the links for video packages, that these deliver really good video as well.

The Last Word: No Doubt This Is What The Future Of Phones Looks Like

The thing is, for the Rs 1,49,999 that you are paying for the Samsung Galaxy Z Fold2 5G, you get an undoubtedly unique and undeniably premium smartphone experience. It learns from the predecessor and that truly shows. Yes, you may take some getting used to the form factor, as it folds and unfolds. Or that it doesn’t have a camera with a 100-megapixel or something. Yet, as a foldable phone that really has no competition so to speak of, the Galaxy Z Fold2 5G will surely wow you. And have the same effect on people around you. They would want to know what this is. And that will be as good a time as any to show off some of this gorgeous foldable phone’s party tricks.