Samsung J2 Core Review: An Android One Based Smartphone Experience On a Budget

The J2 Core is priced at Rs6,190. Does Android Go make the affordable smartphone experience any better?

Samsung has joined in on the Google Android Go party, with the Galaxy J2 Core (SM-J260) in India. The smartphone runs Google’s lightweight Android 8.1 Oreo (Go edition) operating system, which is a stripped down version of Android Oreo. To make it simple, Android Go is designed to attract consumers that are going online for the first time in emerging markets such as India, and is meant to run on phones with basic hardware and not too powerful specifications. The J2 Core is priced at Rs6,190. Does Android Go make the affordable smartphone experience any better?

The Galaxy J2 Core joins a growing number of Android Go phones which have arrived in India this year. Recently, HMD Global has already launched two Android Go phones, called the the Nokia 1 and Nokia 2.1. Earlier, we saw Android Go in entry-level smartphones from Micromax and Lava as well.

From the outset, the Galaxy J2 Core is an entry-level smartphone with mostly expected specifications, for its price tag. It is powered by a 1.4GHz Quad-Core Exynos 7570 14nm processor, and runs the Mali-T720 MP1 graphics. It comes with 1GB RAM and 8GB of internal storage. It features a 5-inch TFT display with 540 x 960p resolution. There is support for dual SIM cards, which is perhaps a must-have feature in affordable Android smartphones. In terms of optics, you will get an 8-megapixel rear camera with f/2.2 aperture lens and a dedicated LED flash. On the front, there is a 5-megapixel sensor with the same aperture size. The smartphone is powered by a 2600mAh battery and it skips on a fingerprint sensor and face unlock.

In terms of design, the front of the Galaxy J2 Core has an all black finish. Samsung has also placed its logo below the display, which perhaps stands out because it is the only slightly shiny element in this otherwise subdued personality. However, you do see a faint hint of the colour of the back panel, as the thin frame emerges on all sides. The bezels around the screen are also quite big, but we perhaps notice that because we have been spoilt looking at the more modern bezel-less phones. The Samsung Galaxy J2 Core is very comfortable to hold, because of the rounded corners and compact form factor. The volume buttons are placed on the right side spine while the power button is placed on the left spine. We must say both are easy to reach and press even when you may be holding the phone with the same hand. The headphone jack and micro USB port are located on the bottom side of the smartphone. The back panel – which is removable – also feels different compared with Samsung’s usual plastic backs for its budget phones. The Galaxy J2 Core features a 5-inch qHD TFT display it offers a resolution of 540x960 pixels. The display seemed quite responsive to touch and also gives correct viewing angles. Be it for the basic daily work or for a bit of video streaming, this screen remains more than acceptable. The quality of the display is quite good indoors as well as outdoors. Brightness levels are good, and so are the viewing angles. The colours don’t wash away under the sunlight, but we do notice that there is a slight alteration of colours. Brightness kicks up well enough to make it easy to read text even amid some reflections.

The J2 Core has an 8-megapixel sensor at the back along with an f/2.2 aperture and an LED flash. The Galaxy J2 Core also has a 5-megapixel sensor at the front. Further, it includes a Beauty Mode that is touted to offer users better portraits and selfies. We noticed that the phone can capture some acceptable photos in outdoor and good lighting conditions. The one thing that we don't like is that the Galaxy J6 camera demands you to be extremely steady while taking a shot, in all lighting scenarios, else the blur does show up in photos. The photographs taken in low-light conditions lack detail and are too grainy and murky to convince. Night photography is another weak area where the camera struggles to deliver. At places like malls, shopping complexes and streets, the camera still manages to capture some acceptable shots, as long as the lightning is manageable. The Galaxy J2 core front camera can click some well-detailed selfies in good light, which will be more than a handful for all your Facebook and Instagram posting needs. 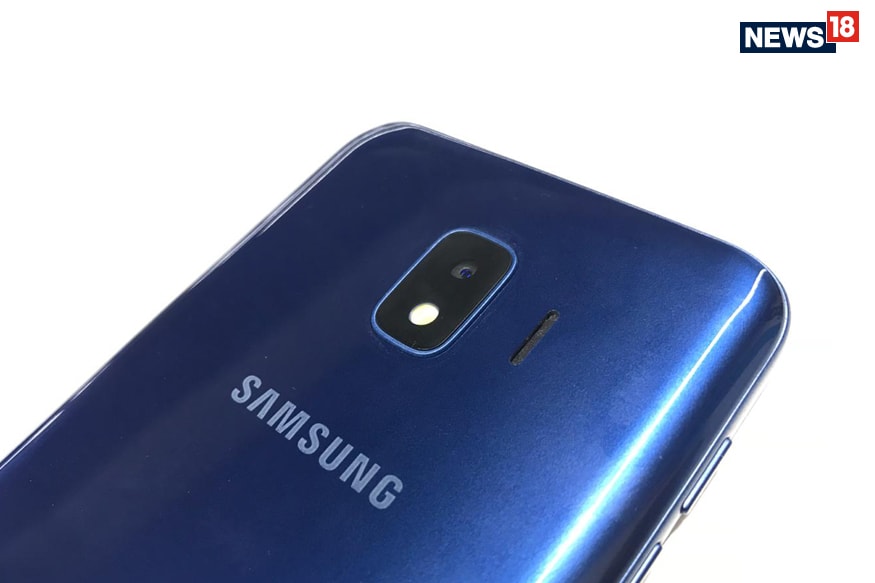 The smartphone is powered by a Cortex A53 quad-core processor which has a clock speed of 1.4GHz. The processor is coupled with a 1GB RAM and a Mali-T720 MP1 GPU. The entire configuration is seated on a Samsung Exynos 7 Quad 7570 chipset. Samsung Galaxy J2 Core is designed for first-time smartphone users, anyone upgrading from a feature phone or someone who is looking for a secondary device to access just basic smartphone features such as web browsing, making voice calls and access Facebook or WhatsApp, etc. Performance is as we would have expected, and it can run a couple of apps smoothly, and if you open and leave any more running in the background, the performance slowdown becomes apparent. The fact that this phone has just 1GB RAM is potentially a virtual ceiling for multitasking. The storage space stats stand at 8GB internal storage which can be expanded up to 256 GB via micro SD card. On the software side, the J2 Core runs the toned down version of the Android, called the ‘Android Go’ with Samsung’s very familiar UI on top. The Android version here is 8.1 Oreo which should be updated to the Android 9 Pie in the coming months. The performance is on par with other Android Go powered devices and we didn’t notice anything outstanding here. The phone comes with preinstalled apps like Google Go, YouTube Go, Maps Go, Facebook Lite, Samsung Max, and Samsung Members with some of them being quite useful, others not so much.

The Galaxy J2 Core is a pretty standard affordable smartphone for users who wants to experience light Android user interface on a smartphone. The design is also functional and adds a point to the overall appeal of the smartphone. For a bit more money, there are some good phones from Moto and Xiaomi as well, but in the budget segment, every rupee matters. And for this price, the Samsung J2 Core didn't show any deal-breaking eccentricities.