The dashboard documents aspects such as how airport activities around the world have been impacted during COVID, how shipping traffic volumes have changed, changes in agricultural production, construction activity, nightlights, air quality and more.

The eye in the sky has been keeping an eye on things. In this case, we aren’t bothering the almighty to share data with us, but the satellites have been tracking the impact of COVID-19 over the past few months as millions around the world have been staying indoors as the virus spread globally. NASA, the European Space Agency (ESA), and the Japan Aerospace Exploration Agency (JAXA) have unveiled a new dashboard which puts together the data from satellite observations. It documents aspects such as how airport activities around the world have been impacted during the COVID spread, how shipping traffic volumes have changed, changes in agricultural production, construction activity, nightlights, air quality and more.

If we are to specifically look at the pollution and air quality stats for India, the satellite data shows a very positive change when India was under lockdown, with a significant drop in nitrogen dioxide concentrations over most parts of the country, including Delhi and Mumbai. The spike towards the eastern part of the country has been attributed to the coal plants operating in that region. The Copernicus Sentinel-5P satellite collected the data. (Read more here) The data also suggests that the nitrogen dioxide levels in China have rebounded to usual levels, as the country lifted the restrictions and pushed for resumption of factories and economic activity. 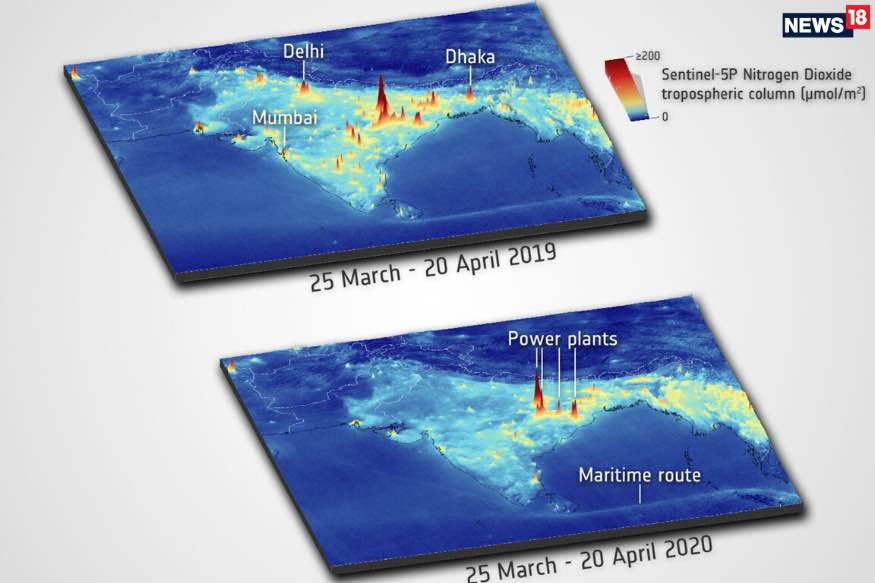 It is important to note that not all economic, agricultural and environment metrics are available for all regions of the world. “The pandemic was not only leaving a staggering toll of human suffering. It was having a global impact that we could document from space. Our three space agencies realized that if we could combine forces, we could bring a more powerful set of analytical tools to bear on this fast-moving crisis,” says Thomas Zurbuchen, associate administrator of NASA’s Science Mission Directorate, in an official statement. The dashboard will continue to get updated as the rolling impact of COVID continues to be felt in most countries.