Sennheiser HD 450BT Review: These Headphones Sound More Expensive Than They Actually Are

The Sennheiser HD 450BT headphones aren’t perfect. But they do have a lot going for them with the sound and noise cancellation, even though some of the other omissions aren’t exactly pleasing.

I have often observed that Sennheiser headphones have that understated elegance about them which really helps them stand apart in a crowd that often has headphones which try to shout out with loud designs. Sennheiser doesn’t need to do that for more reasons than one—heritage, quality and a sound signature that never isn’t what you expected from the outset. But it has to be said that Sennheiser does err on the side of even more design caution with the HD series of cans, something that the new Sennheiser HD 450BT’s predecessors will also testify to. Perhaps that is an effort to distinguish it clearly from the Momentum line of headphones.

The Sennheiser HD 450BT sport a price tag of Rs 14,990 which means they aren’t exactly in the affordable category, that anyone who buys them would expect a lot, noise cancellation has to do its job well and the good thing is, they seem to be delivering on most fronts. Its immediate competition will be the Sony WH-XB900N noise cancelling headphones (these are priced around Rs 13,990).

As comfortable as you can get with full-fledged headphones

In terms of the design, a lot depends on which variant you pick—the white or the black. With the white, you get a pretty plain look that would perhaps appeal to some but the inserts (what are they? Beige?) don’t really add much in terms of visual appeal. The black variant, however, will get you a nice matte finish and a dash of silver that adds some shine to the entire thing. Looks may be subjective but what is most certain is that comfort is top-notch. The Sennheiser HD 450BT gets a very cushy headband and padding around the years. This doesn’t feel uncomfortable even if you are wearing this for a long time. One of the reasons is the around-the-ear design, which does mean the earcups don’t press inwards on the ears. I have to say that the Sennheiser HD 450BT feels incredibly light as well—Sennheiser says these cans tip the scales at 238 grams.

The USB-C port for charging these cans brings tears of joy—no more meddling about with micro-USB ports and cables, something that headphone makers still do from time to time, though admittedly lesser now than a few months ago. Most likely, the cable that charges your phone will also charge your headphones, which is great news for those who like to travel light.

The controls are beyond me. Sorry.

The one area where Sennheiser has perhaps cut corners just a little bit is with controls. There are no touch controls here, which are admittedly pricey. Instead, you have buttons. Power, to call upon the virtual assistant in your phone, volume, music controls and call controls. Quite frankly I do not like these controls and they are just too complicated. Somehow as you wear these headphones, it is impossible for your fingers to remember exactly where each button is and that can be a bit of a problem every time you want to either change controls or maybe reset the noise cancellation or something. Yes, each button has a purpose but I find it a little too complicated and unintuitive. 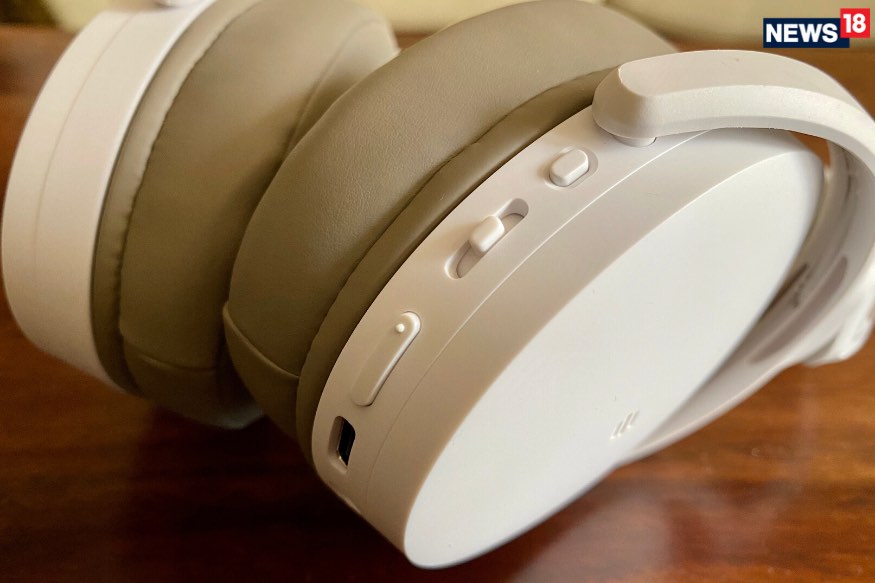 Welcoming sound, with a dash of softness

This is just one of those times when we haven’t been able to travel or step out in a noisy environment to test the noise cancellation capabilities of the Sennheiser HD 450BT. Whatever I could test in the noisiest environment settings I encountered, it is clear that this does a pretty fine job of keeping the ambient noise out of the way. Even with ANC off, the snug fit around the ears does block out quite a bit of the ambient sound on its own. Noise cancellation, when activated, just takes it a couple of notches ahead.

The sound signature of the Sennheiser HD 450BT is all about balance and a very neutral signature. That said, there seems to be that extra softness to the sound which may seem a bit out of place on some tracks. For the rest of the time, you’ll love the powerful yet well restrained bass, the very audible mids and great reproduction of vocals. Kaimo K, Trance Classics and Maria Nayler’s Closest Thing to Heaven, The Truth by James Blunt and Alter Bridge’s One Life are just some examples of the diversity of genres that the Sennheiser HD 450BT handles with ease. The aforementioned softer sound tuning does sometimes compromise the presence of the mids, but if your library is more about up-tempo music, that wouldn’t be much of a problem for you. The thing is, the sound is quite close to what some of the much higher priced headphones bring to the table, and that is where Sennheiser deserves all the credit for the audio tuning. They haven't cut any corners when it comes to the quality of sound, with or without noise cancellation, which perhaps makes us forget about the few shortcomings elsewhere. Sennheiser, really, what were you thinking?

Sennheiser has a Smart Control app (free for Android and iOS) which also welcomes the Sennheiser HD 450BT headphones in its warm and loving arms. But that’s about it, because the app doesn’t really offer any sort of detailed controls or features. There is a very weird (visually quite cool, but useless for actually tweaking sound) EQ, but I really couldn’t find a way to get the sound spot on with that.

The Sennheiser HD 450BT also doesn’t have sensors to auto-pause music or videos that you may be enjoying, if you take off the headphones. You’ll have to do it manually, else you not only miss some bit of the movie while having a quick discussion with someone, but it can also needlessly drain the battery while you may be away attending to something else.

Speaking of which, the claimed 30-hour battery life is pretty much how it works out in the real-world also. And that is great, because you can do a pretty long flight on a single charge.

The Last Word: Nothing is Perfect, which makes this all the more perfect

Even though it isn’t perfect, the Sennheiser HD 450BT does still offer very good value to performance proposition for the price tag it sports. You definitely get slicker wireless headphones with noise cancellation, but those cost a lot more—the Sony WH-1000XM3 (around Rs 29,990) and the Bose Noise Cancelling Headphones 700 (around Rs 34,500). At this price, the Sennheiser HD 450BT is doing a fantastic job of trying to match up to the experience while keeping the price tag in check. I don’t like the physical buttons to control functionality and neither do I appreciate the pretty unhelpful companion app—but all that pales into insignificance because the Sennheiser sound signature just makes everything feel better.