Smartron's latest smartphone comes as a budget segment offering and boasts of some unique features at its price point. Here is how the t.phone P fairs in our first impressions review of the device.

Smartron has come up with another smartphone for its t.phone line-up and this time, the company has aimed for the budget segment in the Indian market. One of the very few Indian smartphone manufacturers, Smartron launched the t.phone P recently with a price tag of Rs 7,999 as a Flipkart exclusive. A bit different from all the other smartphones available at its price point, the t.phone P boasts of a massive 5000 mAh battery, a full metal body and a host of other features. Just how the device fairs as a smartphone in general, let us find out in this first impressions review.

Smartron has taken care of the basic necessities in the making of the t.phone P and surprisingly, they all tick the right boxes. The phone sports a full metallic body, a feature rarely found in this price bracket. Due to this and the massive battery, the t.phone P is bulky and weighs 160 grams. The phone comes close to achieving a premium feel with the round edges, neatly placed antennae bands at the back and a coating on the rear that prevents any sort of fingerprints whatsoever.

The smartphone sports a 5.2-inch HD display with capacitive touch keys at the bottom and prominent bezel at the top. The selfie camera is placed at the top bezel alongside the earpiece. There is a fingerprint sensor at the back which is conveniently placed for usage, right above the company’s branding. The primary camera and an LED flash are placed on the top antennae band at the back. All in all, the t.phone P carries a neat design that will enthral most of the smartphone users.

The UI that runs on the t.phone P is close to stock Android, based on Android 7.1 Nougat, and is surprisingly easy to use. Though it does not have that ‘oomph’ factor, like the TouchWiz or the EMUI, basic Android users will love the simplicity of the entire experience of a simple layout, round icons and subdued colour schemes. The t.phone P is powered by a Qualcomm Snapdragon 435 SoC that makes it impressive enough when it comes to performance. Backed by a 3GB RAM, the phone is easily able to handle everyday tasks and can even perform when pushed beyond an average smartphone use.

The 32GB onboard storage is further expandable up to 128GB on the smartphone. In case that is not enough, Smartron is also offering as much as a 1000GB of cloud storage free for all the buyers of the t.phone P.

Coming to the biggest USP of the t.phone P, the smartphone features a massive 5000 mAh battery, something that is unheard of at its price point. We were easily able to get a day and a half’s backup from the battery, which some may even be able to extend to two days.

The cameras on the t.phone P are just what you’d expect from a device at this range. The 13-megapixel primary camera comes with an LED flash while the 5-megapixel selfie shooter comes with features like smile for capture and beautification mode. The images produced with these are just decent and not very detailed. In case you are a social media enthusiasts who’d like to have the best pictures for your use, the cameras on this one will fail to impress you. 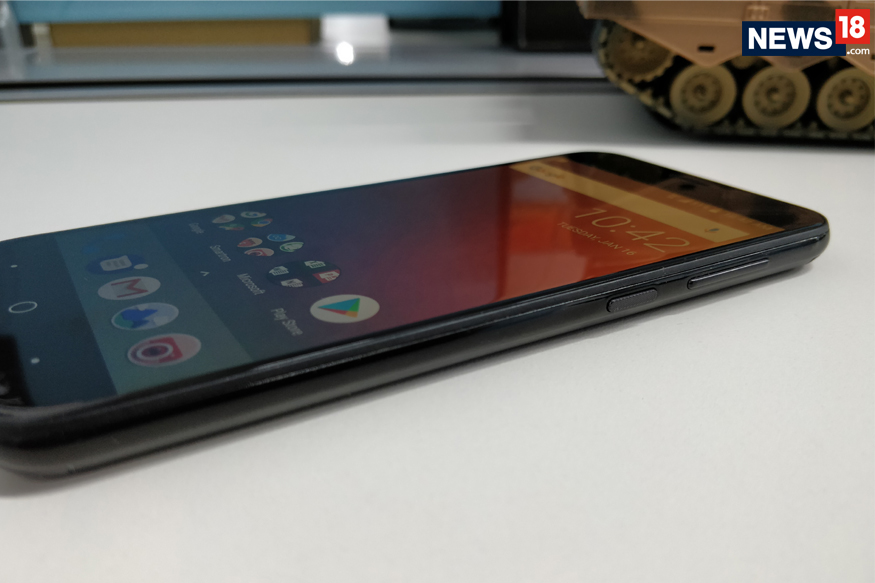 Smartron has managed to bring a smartphone into the budget segment that has a unique set of USPs in its price bracket. To sum them up, the t.phone P is a sturdy phone that has enough rigidity to withstand any sort of rough use, a very simple UI to make the smartphone’s operations easier, enough storage options for any user and a massive 5000 mAh battery for enough back up for 2 days straight.

Where it lacks, is the camera performance and having that appeal to those who want to stand out.