You need to look no further for a powerful yet truly portable wireless speaker that also has the Amazon Alexa smarts.

You need to look no further for a powerful yet truly portable wireless speaker that also has the Amazon Alexa smarts.

There is just something about the phrase better late than never’. While almost every popular audio company was busy jumping on the smart assistant bandwagon and integrating Amazon’s Alexa into the wireless speakers they would make, Sony decided to adopt the wait and watch strategy. And with good reason, we now realize. The SRS-XB402M is now here, and this is Sony’s first speaker in India with the Amazon Alexa assistant available at your beck and call. And that isn’t the only smartness built-in.

The SRS-XB402M is priced at Rs 19,990 (that is the launch price offer, with the actual price pegged at Rs 24,990) and this becomes one of the very few of a kind. There is the Harman Kardon Allure Portable priced at Rs 15,999 which is the only direct competition. In a way, this price tag is significantly lesser than what you would have had to pay for an Amazon Alexa capable speaker, but not made by Amazon. Take for instance the Bose Speaker 500, which is priced around Rs 39,000 and the Marshall Stanmore II Wireless Wi-Fi Smart Speaker with Amazon Alexa built=in priced at Rs 39,990.

In terms of the design, the SRS-XB402M makes it very clear the moment you first set your sights on it, that it means business. The rounded design, the thick speaker grille overlaid with a thick fabric and the rubberized finish on the back along with a perfect fit cover for the charging ports make it look quite rugged. And that isn’t just for show. The SRS-XB402M is waterproof, which means you can take it along for a dip in the pool or hang it by the shower and not feel guilty—this is IP67 rated. It is dust proof as well. There is a reason why it weighs close to 1500 grams, and that’s all the reinforcement showing up. The attention to the smallest of elements makes all the difference. The way Sony has designed the grille of the SRS-XB402M with slanting holes means more sound can pass through. Simply put, that means a louder and possibly even more detailed sound. The controls are at top and are nicely spaced out. If we have to nitpick, we can point to the fact that these controls are backlit—but that genuinely isn’t a hardship.

However, my obsessive approach towards cleanliness did make it a bit too apparent to my eyes how this fabric does tend to accumulate dust over a period of time. Yes, you can clean it, and this really isn’t a commentary on the material in question—but a quick reference to the dusty cities we live in.

But the triple multi-colour lighting makes up for that. This rather futuristic implementation (yes, look at this with the ambient lights turned down and you’ll know what I mean) can be configured to illuminate in a variety of colours and patterns, depending on what you want at that time. Or can be turned off completely, but what’s the fun in that.

Setting this up is quite simple, and very similar to how we have set up multiple Alexa speakers over time. You need to download the Sony Music Center app (free for Android and iOS) to get the SRS-XB402M ready for action. It connects with your home Wi-Fi and that is important, at least to get the Alexa assistant working. You can sign in with your Amazon account details, and the entire Alexa feature set is the same as on any other Amazon Echo speaker you may have used thus far. At this point, it is hard to miss the fact that this app, while it does the job, is a bit sparse in terms of the options and looks a bit basic. In terms of the feature set, it doesn’t correctly deal with Apple Music on the Apple iPhone XS Max either—when you select Apple Music in the Music Center app, it takes you directly to your Apple Music library but is unable to connect with the speaker. This could be a software-based issue and may be ironed out with an app update. Nevertheless, we persist. 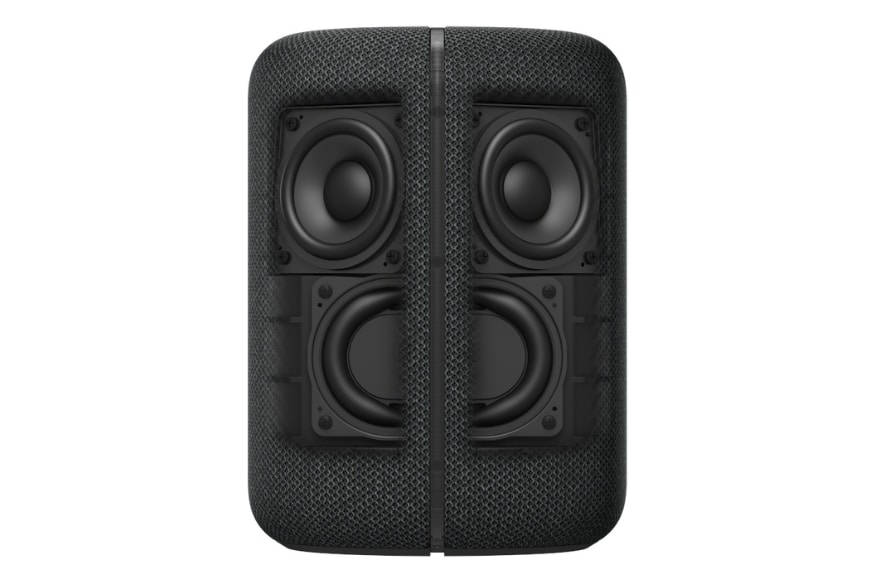 The hardware packed inside the Sony SRS-XB402M is what makes all the difference in the world. There are two audio drivers, each 53mm in size, placed at an angle to disperse sound over a wider area around the sides too, and not just at the front. Sony says this is the lightweight Mica Reinforced Cellular (MRC) speaker cone, which is also more rigid and thereby reduces unnecessary vibrations that can be the reason for distortions. There are two dual passive radiators as well, for the lower frequencies. Solid sound foundations then. But how is it when you start streaming your playlist?

The sound is the SRS-XB402M’s strongest point. As it should be, since it is, a speaker. But the attention towards making each audio driver a bit more robust has certainly had a positive impact on the detailing and quality of sound. For instance, even at fairly high volumes, the SRS-XB402M can fill even a large living + dining room space with absolute ease. And if you don’t really look at where the speaker is physically placed, you’ll appreciate the wide sound spread even more. I had experienced this in the more expensive Bose Speaker 500 and am delighted to report that for a much lesser financial outlay, Sony is able to get the same effect with the SRS-XB402M. Then there is the party piece, called Live Sound. Yes, there is some trickery happening in the background to give the audio a bit more of a “3D” feel—chances are, if you like your music as close to pure as possible, best to leave this turned off. But if your playlists are all about remixes and dance numbers, then leaving this on has its advantages.

The good thing about the Sony SRS-XB402M is that all the audio power and prowess that it possesses is flexible enough to work well with a variety of genres. I usually listen to a lot of trance, electronic and classic rock (not necessarily in that order) while some other members at home mix it up with some R&B, pop and dance numbers. And in almost all cases, the clarity, vibrancy and the detailing remained pristine. In fact, in Love My Soul by Agron (from the album Café del Mar, Vol. 14), the sound of the raindrops and the rustling of the leaves at the very beginning of the track is something most speakers aren’t able to detail as well—and that just indicates how good the Sony SRS-XB402M is with the basics.

Having said that, we did notice a few times that the bass felt a tad lesser than perhaps other tracks, but those observations were few and far between. At this point, we switched on and switched off the Live Sound mode, and also checked the sound settings in the app, but nothing seemed out of place and the extra bass mode was turned on.

Amazon Alexa is integrated within the package, and you can seamlessly switch from the Bluetooth mode to Alexa, and vice versa. Even from the farthest corners of the room (when the SRS-XB402M was not in direct line of sight), the response to our calling out to Alexa elicited a favorable response. The feature set remains the same as with any other Amazon Echo speaker or an Alexa capable third-party speaker. The Sony SRS-XB402M can work with Spotify as well, but there is a slight compromise here. Alexa, at least in India, still doesn’t play ball with Spotify. Therefore, you need to open the Spotify app on your phone and connect with the SRS-XB402M via the Spotify Connect feature—as long as your phone and the speaker are on the same Wi-Fi network. We did notice that at times, the speaker did not show up on the Spotify Connect devices list, but yet at other times, it did.

The proverbial cherry on the Sony SRS-XB402M’s cake is the robust battery life. We got close to 12.5 hours on a single charge, which is in line with Sony’s estimates of 12-hour battery life. While most of the Alexa capable speakers don’t even have a battery, this is a genuine value addition to be able to carry this around the home and beyond.

At this point in time, we really have no hesitation in saying that the Sony SRS-XB402M is miles ahead of the Harman Kardon Allure Portable, all things considered. That leaves us with what your use case scenario would be. If you would prefer a portable Alexa capable speaker to move around the home, then the Sony SRS-XB402M is your best bet at this price. There really is no other competition.