Sony WH-CH710 uses something called the Artificial Intelligent Noise Cancellation (AINC) while Sennheiser uses the audibly superior active noise cancellation (ANC). But for the price difference, it is a tough choice. I’m glad it isn’t my headache to pick one off the shelves!

Having shown off its noise cancelling prowess with the Sony WH-1000XM3 premium headphones, the attempt is to bring similar levels of performance to the more affordable price points as well. Democratization of technology, as they say. And that takes us straight to the Sony WH-CH710N, which is priced at Rs 9,990 (a sidetone though, the official Sony India websites insist the price tag is Rs 14,990 and this is available for a discount). It is seriously cool price tag and that makes the Sony WH-CH710N an oasis in an otherwise parched landscape. That also makes it the most affordable noise cancellation headphone in Sony’s line-up in India, after the aforementioned WH-1000XM3 (around Rs 29,990), the WH-H910N (around Rs 24,990) and the WH-XB900N (around Rs 16,990). The question really is whether there are compromises to achieve the noise cancellation levels at this price, and how much, while also trying to understand whether it carries down any features from its more expensive siblings?

Competition check with Sennheiser HD450BT is to be expected, that is if noise cancellation is an important element for you. Anyone considering the Sony WH-CH710 will surely glance at the HD450BT which is priced at Rs 14,990 and for the extra money you shell out for that, it does noise cancellation in a slightly different way. With typical Sennheiser sound, that can be had in white and black colors, offers long battery stamina and feels very light as well as comfortable to wear for long durations. The battles have begun in earnest. 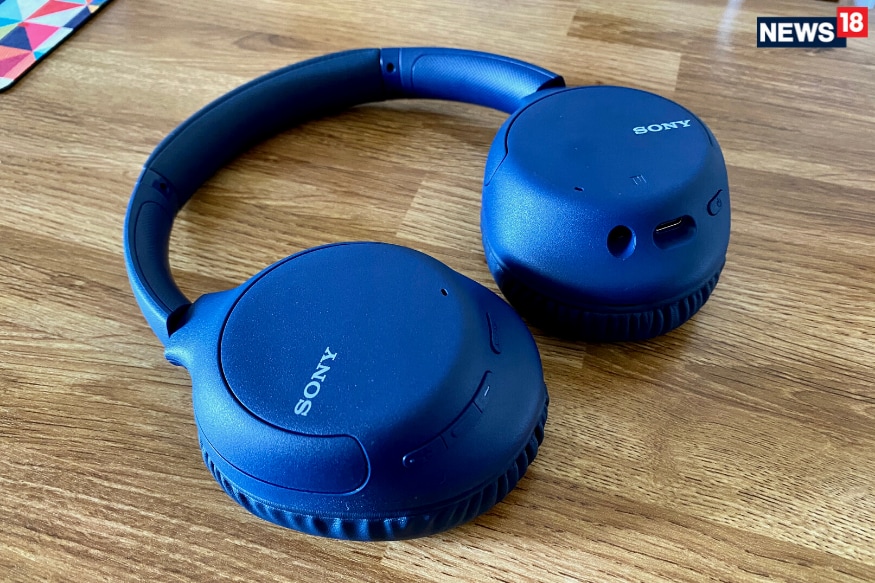 You win some, you lose some

First things first, the Sony WH-CH710N immediately sacrifices some of the bells and whistles that you’d associate with higher priced headphones. For instance, there is no carry pouch or carry case bundled. That is understandable—it is pure economics at play here. Sennheiser does bundle a very nice carry pouch for the HD450BT, which is a nice value-addition to have for the headphone you have just purchased.

Nice and light, and well designed

Sony has most certainly given the Sony WH-CH710 a lightweight build, tipping the scales at around 218 grams. That is great if you want to wear them for a while at a stretch. You can have the Sony WH-CH710 in black and blue colours and my personal preference has to be blue purely because it stands out compared with black. The outer of each earcup has a more curvaceous design as well which is good to look at. The headband also has good cushioning. The power, volume as well as noise cancellation buttons are spread between the left and right earcup, and you will eventually get used to the layout without having to look at it. This has a USB-C charging port, which means in all likelihood, your phone charger will be able to do the job. All in all, once the world becomes a better place and you are able to travel, the Sony WH-CH710 will be a good companion to have for the travels.

In comparison, the Sennheiser HD450BT weighs 238 grams but in the real world, you really wouldn’t feel the difference. Earcup sizes are largely the same in terms of diameter albeit with slight design differences, while Sennheiser has bestowed slightly thicker padding on the HD450BT’s earcups. What I have not taken to is the physical button layout that Sennheiser went with, and Sony has done it much simpler in terms of layout and recollection. Your colour choices are black and white—with the white, you get a pretty plain look that would perhaps appeal to some albeit with beige inserts while the black variant will get you a nice matte finish and a dash of silver that adds some shine to the entire thing.

I’m not sure if this is a fallout of the accountant getting in the way, but the Sony WH-CH710 do not fold, and the earcups can only be swiveled flat. The Sennheiser HD450BT folds into a much more compact size, which may be what you want when you put the headphones in the backpack or your handbag.

It is all about the sound, and blocking out the noise

First things first, do not expect the Sony WH-CH710 to sound like the top-of-the-line WH-1000XM3. With the price difference, it would certainly be fallacious to even assume so. That being said, this isn’t short on audio power either. In each ear are 30mm audio drivers. In my experience, the Sony WH-CH710 do what they are supposed to do as far as the overall audio experience is concerned. These aren’t neutral by any stretch of the imagination, and while not bass-heavy, there is still that slight emphasis towards the lower frequencies. Yet, it is nearly impossible to find a track that either loses out on detail at either end of the spectrum. The sound is enjoyable and if your library is tuned more towards bass heavy music, you would love this. These cans can go really loud as well, and not lose any clarity along the way.

Still, it misses that extra sparkle that the Sennheiser HD450BT offers. The Sony WH-CH710’s frequency range is 20 to 20,000Hz while Sennheiser has given the HD450BT the ability to tap the wider 18 to 22,000Hz frequency range. While I had noted in the HD450BT review as well that there seems to be a bit more softness to the sound, quite audible in some tracks, the sound signature remained neutral as it should.

Between the two, for most users, it will be too close to call. The Sony WH-CH710N and the Sennheiser HD450BT have both taken a different approach to reach where they are, and while sound preferences are subjective, both deliver on the promise of sound. That is even more creditable for the Sony WH-CH710N, particularly considering the really affordable price tag that it comes with.

The small matter of the noise cancellation. Let us deal with the elephant in the room—the Sony WH-CH710 does not have active noise cancellation (ANC). Instead it uses something called the Artificial Intelligent Noise Cancellation (AINC) to understand the nature of noise around you via the dual microphones in each earcup and then suppress them. The results are quite acceptable, I have to say, with considerable amount of outdoor noise such as traffic and people chatting getting blocked out. But a noisy air conditioner, for example, or something similarly harsh and perhaps rare still somehow streams through—not that it is going to bother you much, but you just know it is there. This noise cancellation method will do the job for most people, but harsh sounds will still be noticeable to you unless you really turn up the volume.

Sennheiser has a significant advantage with the active noise cancellation (ANC) in the HD450BT. When turned on, these block out pretty much every noise in the world around you. That is just how superior ANC is as a technology, and it is good to see Sennheiser not cutting any corners on that performance aspect.

In terms of battery life, we got close to Sony’s claimed 35-hour battery backup time for listening to music with the noise cancellation active. This is quite robust and should work well for travelers too. You charge the battery and pretty much don't have to worry about it for a while. In comparison, Sennheiser HD450BT delivers a bit more than 30 hours with noise cancellation active, and remember, the ANC that it deploys is also far superior. The Last Word: It is a steal at this price! Except...

The thing is, the Sony WH-CH710 is ticking off a large part of the spec sheet. The lightweight and comfortable build, powerful sound and the fact that it has noise cancellation capabilities. In essence, the slight bias towards lower frequencies should also work well for a lot of Indian users who prefer bass heavy music. The Sony WH-CH710 is indeed a very capable headphone and I wouldn’t mind recommending it to just about anyone. At the price which it comes for, under the Rs 10,000 mark, there really is no competition for this sort of audio experience. Why would you not want to buy the Sony WH-CH710N and instead spend similar amounts of money on unknown brands or products that are just not even remotely close as far as the sound is concerned? Don’t do it!

However, this is where the finer details come into play. If noise cancellation is important for you and you need a good pair of cans that will block out the ambient noise at work or while traveling, then you just have to prepare yourself to spend a little more and go for the Sennheiser HD450BT which is using superior noise cancellation technology and does a better job of blocking out the ambient noise for your music, podcasts and Netflix binge watching sessions. There are just no two ways about it.