Shouvik Das
It has been a while since we’ve been peering out into the void of space and gazing at Jupiter. Now, thanks to NASA’s New Frontiers programme of outer space research, we have our very own space probe, Juno, orbiting our solar system’s largest planet in very close quarters. Thanks to an elliptical polar orbit, Juno makes close proximity approaches to Jupiter at regular intervals, and uses a tiny light camera called JunoCam to take close-up photos of Jupiter and its fascinating surface. Now, NASA has revealed a bunch of photographs that were recently sent back to Earth by Juno, and have been post-processed by NASA’s group of volunteer scientists and uploaded on JunoCam’s website. Each of these photographs offer stunningly detailed depictions of Jupiter and its violent storms. One of the photos have stood out for its unbound beauty – the ‘Jupiter Marble’. Processed by citizen scientist Kevin Gill, the photograph shows Jupiter as a quaint, rare marble with beautiful textures on its surface. In reality, the photo reveals Jupiter’s ‘Great Red Spot’ – a particularly violent storm that happens to be one of the most violent storms across the entire solar system. The photograph also shows multiple other storm spots on Jupiter’s surface, and a series of gaseous streams that are spread across the body of the planet. This has also been highlighted in other photos processed by another citizen scientist, Svetoslav Alexandrov. 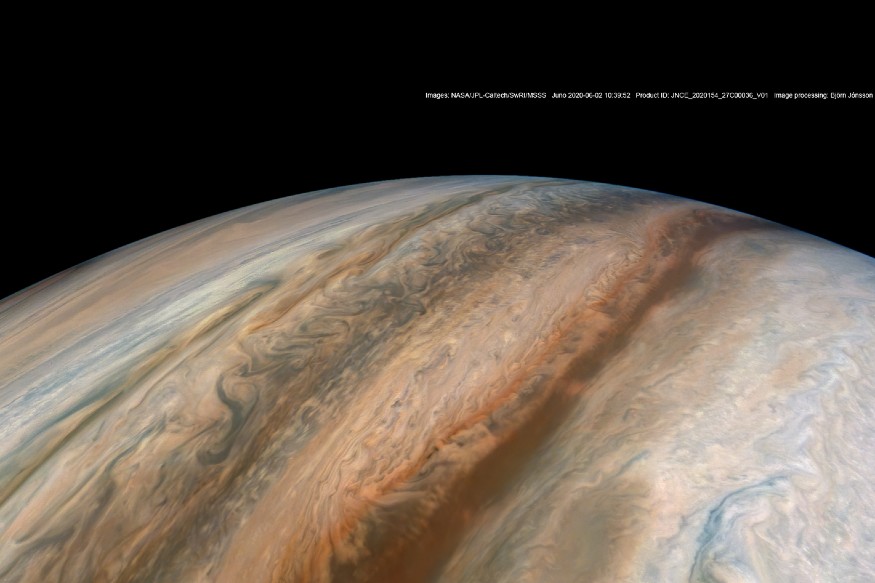 Juno’s latest close approach to Jupiter also captured its north equatorial belt, which looks relatively calmer than its bulging equatorial area. It also went past Jupiter’s south equatorial belt, and each of these photographs reveal our solar system’s largest planet in closer detail than ever before. All of these photos are part of Juno’s actual, scientific mission that aims to study Jupiter storms, atmospheric composition, gravitational and magnetic fields, and the planet’s core from close quarters. Studying Jupiter is seen as key to understanding many mysteries surrounding the formative years of our solar system, as well as helping us in getting a better understanding of how giant, gaseous planets are formed. Jupiter’s storms are of particular interest on this note. They are the most violent that are known to exist in the entire solar system, with speeds reaching over 600 km/h. To study these, Juno has approached Jupiter up close at regular intervals. These approaches are thanks to the elliptical orbit in which the probe has been placed around Jupiter, and are known as a ‘perijove’. Once it comes near the surface, Juno can detect radio signals that are generated by Jupiter’s thunderheads, hence tracking how lightning forms all across Jupiter’s violent innards. Juno has already determined that Jupiter is comparatively rich in water, with the latter making up about 0.25 percent of Jupiter’s overall atmospheric composition.

Juno has already completed 27 perijoves, and is earmarked to last for 35 of these approaches. It is slated to wrap up its final approach by July 30, 2021, at the end of which it will be crashed into Jupiter’s surface, and therefore, disintegrate. Interestingly, given that it has been named after the Greek god Jupiter’s wife, there is a sense of poetic rhythm to the way Juno’s journey would finally come to an end – at one with its lover, after all this time.

Until that day, we expect to see many more such stunning photographs of Jupiter, as well as scientific breakthroughs that can help mankind study far-away planets more accurately in the future.
Tags