Airtel now offers speeds between 100Mbps and 1Gbps, and most of the tariff plans are rather attractively priced.

The faster the internet at home, the better the experience with all things online. Video streaming, web browsing, file downloads and uploads as well as the headroom that you get to have multiple devices gobbling up their share of the bandwidth without slowing down the others. A genuine feel-good factor. But for most broadband users, this either remains a pipe dream, or they just don’t know something better is in store. This year has been a great start, on the home broadband front. And that’s the Airtel Broadband line at home, which is now proudly Airtel Xstream in all its glory.

Just to get started, what exactly is Airtel Xstream broadband? Chances are, you must have heard about fiber broadband connection, which rival internet service providers (ISPs) have been advertising and offering for a while now. And with good effect, if I may add. Spectra and ACT Giga have been doing it for a while now with speeds up to 1Gbps, but admittedly, these weren’t available in all areas. The seriousness really kicked in when Reliance Jio Fiber arrived on the scene last year. Airtel in the meantime reconfigured their tariff plans and shifted focus to fiber. Airtel Xstream is a “fibre optic internet connection”, which basically means the ageing copper backbone will be replaced by the newer technology. The result, better speeds and consistency.

Walk Down the Memory Lane
Let us start with a bit about the past, and how it leads to the moment we are at. I have had an Airtel internet line at home since times immemorial. Back when it was called Touchtel and the dial-up that went along with it. Then came the upgrade to DSL many years ago, and over time, speeds increased too. So much so that DSL started at 128Kbps back in the early 2000s and when I finally upgraded to VDSL, a slightly upgraded take on the tech that was getting long in the tooth, my DSL line was running 24Mbps. The VDSL upgrade, with the changes at the exchange level and a new modem meant a newer tech was trying to make best use of the old copper cables and the hardware designed to run it. At this point, the maximum speeds I could get upgraded to were 40Mbps download and 1Mbps upload. Like ADSL, VDSL also suffers from similar “distance from node” issues, and hence the ceiling of 40Mbps. Well, the connection worked for the most part, but connection drops were common, and speeds weren’t always the best when multiple devices were connected. Anyway, I always had an eye (and a lot of hope) on Airtel eventually offering the fiber upgrade around my area of residence. The fruits of patience are sweet. Towards the end of last year, Airtel began rewiring the residential complex. The technical staff on site confirmed that the older copper lines would be replaced by the new fiber, which will support much faster speeds. And as we entered January 2020, the good news came through—Airtel was ready to rewire inside the home too. Not a moment’s delay. The fiber installation requires utmost precision. The plaster you see on the floor is poor wall build quality, and not the Airtel tech team's fault (Image: Vishal Mathur / News18)

The First Steps
Finally, and it was a Sunday when Airtel’s technical team enquired about whether they can come over to configure the line. Why not! It is interesting to see how the new fiber cable that runs all the way through to the new router is significantly thinner than the outgoing copper cable. And this one is white colored too, which helps meld better with the colour of the walls—if that bothers you otherwise. The customer premise equipment (CPE) is a Nokia G140W-C router where the fiber connection terminates. Even if you intend to use your own router (for better range and faster speeds on Wi-Fi, for instance), my recommendation would be to use that in bridge mode and let Airtel’s own CPE handle the line termination. In case of connectivity or speed drop issues later, they will be in a better position to understand where the problem may lie. The Nokia Router is Unlike Basic Routers ISPs Chuck Your Way
The router is quite capable in its own right, if you place it optimally inside your home. This is dual band, which means you get 2.4GHz and 5Hz bands for your devices to connect to. This does Gigabit Wi-Fi (Airtel Xstream plans go all the way up to 1Gbps) and there are four self-configuring Gigabit ethernet ports. This router is great for Wi-Fi connectivity if you aren’t asking it to serve up the connection when there are more than two walls between it and the device you want to access the web on. Range will suffer after a point, but for most homes, the speeds that this delivers on 5GHz wireless are more than adequate. Top tip—use the 5GHz band for better speeds, particularly on the 200Mbps, 300Mbps and 1Gbps connections.

The Airtel technical team painstakingly spliced (that’s the technical term for joining fiber cables) the fiber and installed the termination box from which the connection to the router is done. One needs to be very careful with fiber optic cables, since they are quite thin and rough handling can break them. Then the tech team set up the modem, waited for the over-the-air update installation to finish on the device and went about checking the line power stats and configuring it for my account. All this, while I was chomping at the bit to get started. 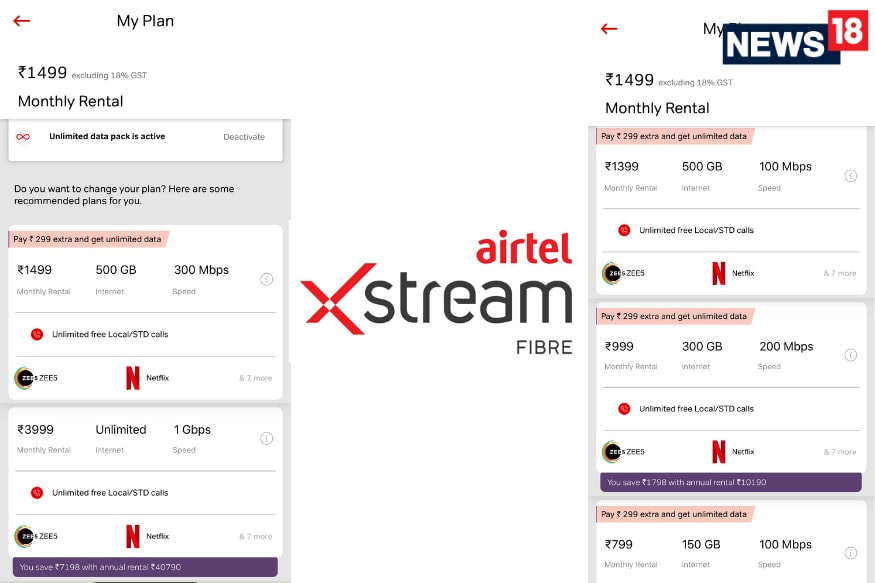 Why would you not choose at least 200Mbps speeds? (Image: Vishal Mathur / News18)

Choosing a Tariff Plan
Now on to the business end of things—the speeds. With the new Airtel Xstream line, I could choose up to 1Gbps speeds on my line now—wallet permitting. For starters, I was required to call the Airtel customer care to upgrade the speed from the existing 40Mbps to 100Mbps on the same tariff plan first. That happened smoothly. But I wasn’t going to be happy with just 100Mbps now!

On to the Airtel Xstream tariff plans. And one thing to note before you get down to choosing a plan is the new unlimited data add-on that is on offer with most plans—this is priced at Rs 299 per month, over and above the price of the tariff plan that you choose, and the data limits of the plan are wiped clean—you get 3333GB of data per month.

The Airtel Xstream broadband tariff plans start at Rs 799 per month. This offers 150GB data with speeds up to 100Mbps download and 100Mbps upload. The symmetric upload and download speeds on the Xstream fiber lines are a significant upgrade over the erstwhile VDSL line, where uploads were capped at a measly 1Mbps. All national calls are free and unlimited. You also get the subscription to Airtel Xstream Premium video streaming service that has more than 370 Live TV channels and more than 10,000 movies catalogued on the platform. The Shaw Academy courses, Wynk Music subscription and cashback on FASTag purchases from Airtel Payments Bank.

The next plan in line is the Rs 999 plan. You get 200Mbps speeds and 300GB of data. All national calls are free and unlimited. This plan onwards, you are bumped up to the VIP service category in case you require service or support for your connection. There is a one-year Amazon Prime subscription bundled, as well as a subscription to Zee5 streaming platform. Shaw Academy, Wynk Music, Airtel Xstream video streaming and FASTag cashback are also active on this plan. The addition is the Juggernaut Books Readers’ Club membership, which gives you access to more than 5000 books.

If you want even faster speeds, then the Rs 1,499 plan is for you. This gets you 300Mbps speeds, upload and download, as well as 500GB data every month.

Last but not least is the 1Gbps plan. By default, this plan offers unlimited data, and you don’t need the Rs 299 add-on. The 1000Mbps upload and download speeds must surely be something else as far as the experience of streaming 4K HDR content is concerned. But the 1Gbps plan is priced at Rs 3,999 per month before taxes. I do expect the prices to come down in the coming months, but as things stand, this sort of price point really would be a tall order for most households. 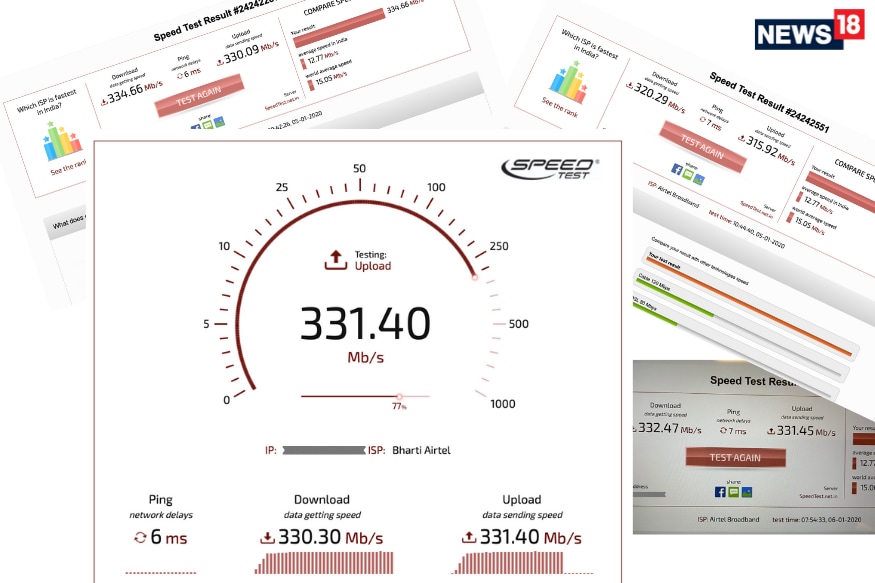 The speeds on the 300Mbps are consistently fantastic, even with some buffer for losses on Wi-Fi (Image: Vishal Mathur / News18)

300Mbps it is For Now; 1Gbps When Prices Reduce
The Rs 1,499 Airtel Xstream broadband plan is what I opted for, with the unlimited data add-on. What I get is 300Mbps speeds, upload and download. And by that, I mean I get 300Mbps speeds, upload and download. On wired connection via the default Nokia router, the speed tests suggested that the line is configured for around 340Mbps up and downstream, perhaps to factor in the losses of around 40Mbps on wireless depending on the router and the device you are using. Ping rates are around 9ms, and streaming 4K HDR content on two different TVs at the same time was absolutely smooth with no connectivity slowdowns on the other phones and tablets in use at the same time. So much so, now a 100Mbps internet line feels sluggish! Airtel have perhaps configured the line in a way that there is some headroom to factor in bandwidth losses on Wi-Fi. As I had mentioned earlier, I had allowed the Nokia router to be the termination point, and then connected the brilliant AmpliFi HD mesh router by Ubiquiti Networks and guess what, even on Wi-Fi, the speeds were above 300Mbps. Throughout, the wireless speed tests also elicited results speeds between 290Mbps and 304Mbps download and around 300-306Mbps upload. That is fantastic, whichever way you look at it.

It is About a Wholesome Experience
The speed and consistency with the updated Airtel Xstream broadband line over the past 15 or so days has been more than a couple of notches above anything I’ve experienced in the past few years, be it the ADSL era or the boosted VDSL line.

Airtel doesn’t have the fiber Xstream broadband everywhere just yet, but the rollout has quickened off late. The older copper lines are being replaced by the fiber optic foundations steadily, which will allow you to get much faster broadband speeds as well as more consistent internet connectivity. The Airtel Xstream broadband plans are also quite attractively priced, apart from perhaps the 1Gbps plan which is a significant jump over the 300Mbps plan. I don’t think any other broadband service provider comes close to the overall experience that Airtel is able to offer—the tariff plans, delivering the speed and also the technical support, for instance. And believe me, I have tried many ISPs.
Tags: