Shouvik Das
TikTok has received a major boost in India, with the Madras High Court finally lifting the ban on the app’s operations in India. In what should come as relief for the Bytedance-owned social media platform, the Madras HC took the decision after hearing appeals from TikTok India’s senior advocate, Isaac Mohanlal, and independent counsel, Arvind Datar, which appealed under multiple, constitutionally approved grounds. The judgement lifts the stay order by the Supreme Court, on the interim ban imposed by the Madurai bench earlier this month.

The Court Ruling
According to the legal proceedings, Mohanlal stated in favour of TikTok that the company has put restrictive technology in place to ensure that content covering nudity, obscenity and of pornographic nature is not uploaded, created or distributed through the platform. Further submissions also included a comprehensive list of measures that TikTok has undertaken in order to remain legally compliant and operate in India.

A Madras HC ruling earlier this month had stated concern under grounds that TikTok was being used as a platform for spreading of obscene and illicit content, and with the primary target consumer being children and young adults, questioned the impact on mental health that the app was having on the average consumer. It also highlighted on the aspects of protecting a child from online abuse, which could be inflicted by strangers on a social media platform.

While TikTok’s measures to regulate its own platform appear to have had its desired impact, independent counsel Datar further appealed under the intermediary guidelines of the Information Technology Act, stating that Article 19(1) of the Constitution of India protects the right and freedom of online speech. Furthermore, in the initial report filed from the court by BarAndBench, it has been revealed that Datar argued that it is unconstitutional to create a system where a “statutorily permissible” service becomes “judicially impermissible”. The judgement also overturns the appeals of an independent petitioner, which stated that the TikTok ban should be stayed on account of the app’s Chinese origin, which thereby links it to the potential threats posed by China to India.

Official Statement
TikTok India has issued a statement post the passing of the High Court order. A company spokesperson stated, "We are glad about this decision and we believe it is also greatly welcomed by our thriving community in India, who use TikTok as a platform to showcase their creativity. We are grateful for the opportunity to continue serving our users better. While we’re pleased that our efforts to fight against misuse of the platform has been recognised, the work is never “done” on our end. We are committed to continuously enhancing our safety features as a testament to our ongoing commitment to our users in India."

What is TikTok?
One of the most notable proponents in a growing proportion of vernacular language-oriented social media apps and platforms, TikTok is one of the two services on offer by the Chinese social media conglomerate, Bytedance. The app was rebranded from the earlier Musical.ly, and offered quick, 60-second video snippets that users can upload and share on the platform.

These videos encompassed a wide range of topics, including political speech, general entertainment, trending matters, and, in what concerned the Indian judiciary, sexually inclined content. Given that much of the content on the platform is user-generated, the app is home to a large section of content that falls under the grey regions of the platform's fair usage policy. Furthermore, TikTok's layout is primarily based on short span videos, which cater to the minimal attention spans and quick-fire content consumption trends among adolescents, teenagers and young adults. Given the presence of sexual content on videos, concern was raised that TikTok was becoming a platform of addiction for many users, which in turn was producing aspects such as degraded mental health and skewered sense of morals, ethics and judgement among the impressionable youth.

Self-Regulatory Steps
Last week, News18 spoke to TikTok India ahead of the Madras High Court's initial ban on TikTok downloads in India, to understand how it sees the present situation. Alongside labelling the legal proceedings as "disproportionate, discriminatory and arbitrary", a TikTok India spokesperson further detailed the prohibitive and self-regulatory steps that the platform was undertaking in a bid to improve its platform and stay within the legal boundaries of operations in India.

Among multiple steps, three of the most important steps taken by TikTok are 'Filter Comments', 'Anti-Bullying Guidelines' and 'cVigil App Integration'. With filter comments, TikTok introduced a proprietary filter for every user, who could choose up to 30 customised words to ban such terms from being used by other users as comments on their content. The customisability feature is in line with the fact that forms of bullying take diverse shapes owing to the extent of vernacular languages in India. 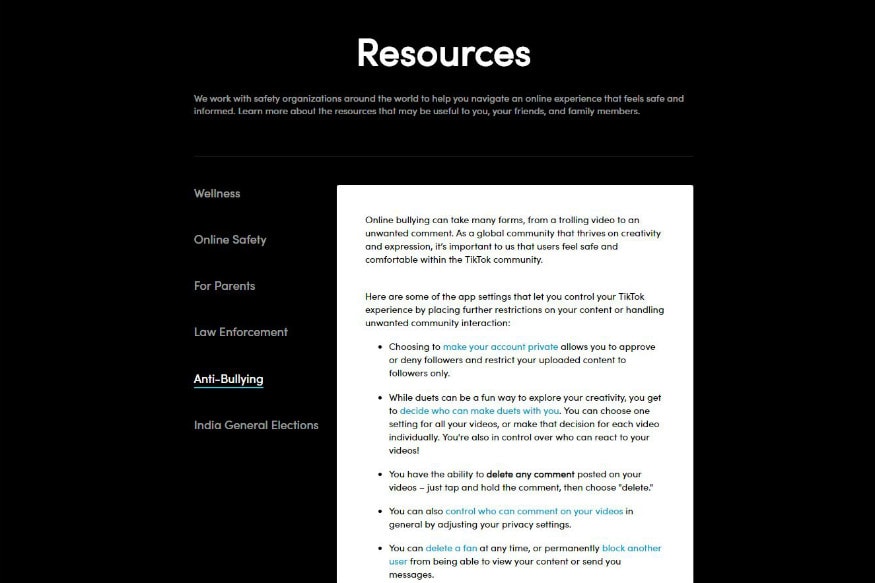 The anti-bullying guidelines, meanwhile, fall under the purview of general user guidelines and easy to access helplines that TikTok extended to its users, after questions about its impact on mental health came to the fore. Alongside offering general user guidance for conduct on the platform, TikTok also introduced an easier way for users to report content, and claimed that it increased the level of vigilance in terms of quality control on its platform.

The third step is linked to the ongoing Lok Sabha elections in India, where politically inclined hate speech, propaganda and other messages could be reported and taken down on the platform. This, too, was put in place to help users and authorities report on political content, as the platform looked to increase its credibility.

Going Forward
While the Madras HC order seemingly resolves TikTok’s plight for now, it remains to be seen how the platform continues its self-regulation process, and whether any statutory body is appointed to oversee the proceedings and operations at the Bytedance-owned social media company.
Tags