Three major Chinese smartphone manufacturer Vivo, Oppo and Huawei have launched their new smartphones Vivo V9, Oppo F7 and Huawei P20 back to back with an iPhone X-like notch as their key highlight. Here is a comparison of the specifications that these smartphones carry and the features that they have to offer.

In a determination to create a full-view display on the iPhone X, Apple was enforced to come up with a “notch” at the top of the screen to house the sensors usually housed by the upper bezel. As it turns out, this design has made the phone more popular than the smartphone industry had expected earlier. So much so, that now the same design concept is being aimed at by the Android smartphone manufacturers for their smartphones. Following this, three major Chinese smartphone manufacturers, namely Oppo, Vivo and Huawei have launched their new smartphones Oppo F7, Vivo V9 and Huawei P20 back to back with an iPhone X-like notch as their key highlight.

All the three devices look strikingly similar to the Apple iPhone X, especially on the display front. Like the iPhone X, they also come with a Full View display with a notch at the top centre. Through the notch, Vivo V9 offers a screen-to-body ratio of almost 90 percent. Vivo V9 also supports face unlock security feature. At the same time, the new Oppo F7 smartphone also follows the same trend popularised by the iPhone X - of sporting a notch on the top of the display to house components like the front camera, earpiece, and proximity sensor in a bezel-less display design just like Huawei P20. Here is a comparison of the specifications that these smartphones carry and the features that they have to offer.

The Vivo V9 looks strikingly similar to the Apple iPhone X, thanks to the notch at the top-front and a vertical dual camera setup at the back. Like the iPhone X, Vivo V9 comes with a Full View display with a notch at the top centre. The notch sports the earpiece, selfie camera LED notification light and a sensor. Vivo V9 also supports face unlock security feature.

As for its specifications, the Vivo V9 sports a 6.3-inch IPS LCD Full View display with Full HD+ (2280x1080 pixels) resolution and a 19:9 aspect ratio. It is powered by an octa-core Qualcomm Snapdragon 626 SoC and carries a 4GBRAM with 64GB of internal storage, expandable up to 256GB. The phone runs the latest Android 8.1 Oreo-based FunTouch OS 4.0 and is backed by a 3260 mAh battery.

As per Vivo, the V9 comes with AI Smart Engine that aims to boost the smartphone's performance over time through smart storage management and app launching based on the user behaviour. To enhance the accuracy of its face unlocks, the V9 features AI Face Access. An additional AI Attention Sensing helps to adjust the volume of notifications when the user is looking at the screen.

Vivo V9 sports a plastic built with a rear-mounted fingerprint sensor and comes with a micro-USB support.

As for its optics, the Vivo V9 sports a dual camera setup with a 16-megapixel primary sensor with f/2.0 aperture and a 5-megapixel secondary sensor (f/2.4) for depth effect in the images. It offers Bokeh mode, Shot Refocus for adjusting the depth effect post clicking the picture, an HDR mode, PDAF and dual-LED flash. At the front, the smartphone comes with a 24-megapixel sensor with f/2.0 aperture and AI support for enhanced selfies.

Following the lines of Apple's iPhone X, Huawei P20 series smartphones sport a notch at the top of their 19:9 aspect ratio Full View displays as well as vertically aligned dual cameras at the back. Here is a look at what all the new Huawei smartphones have to offer. 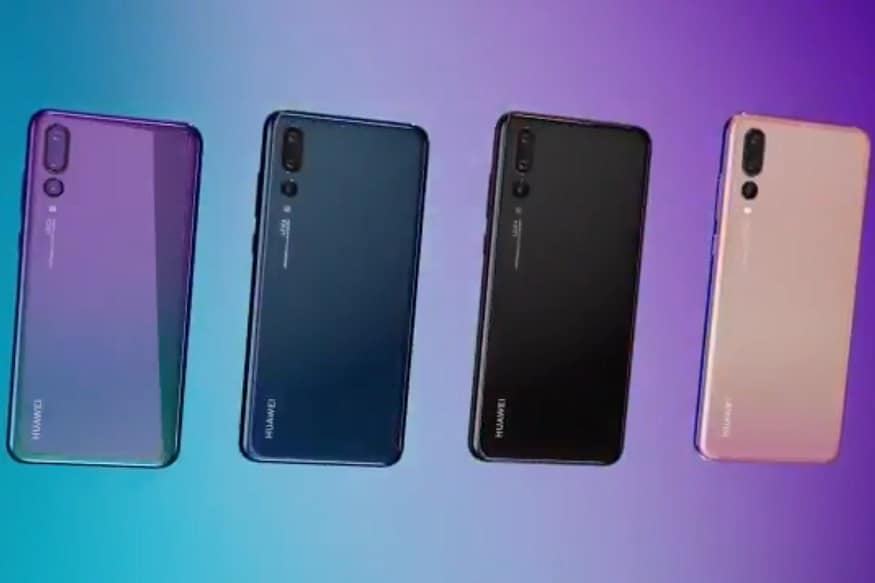 Huawei P20 sports a 5.8-inch Full HD+ LCD display with 2240x1080 pixels resolution and an 18.7:9 aspect ratio. It is powered by Huawei's own Kirin 970 octa-core SoC and carries 4GB RAM along with 128GB of internal storage which is further expandable. As per Huawei, the chipset on the Huawei P20 carries dedicated components for AI capabilities. The Huawei P20 runs the latest Android 8.1 Oreo with Huawei's custom UI, EMUI 8.1 on top. Huawei aims to push faster software updates through 'Project Treble'.

As for its highlight, the Huawei P20 comes with a dual camera setup at the back with one 20-megapixel sensor and another 12-megapixel sensor for depth effect in images. The camera setup offers up to 2x zoom and slow-motion video recording capability at 960fps and 720p resolution. Huawei announced that the DxO mark rating for the Huawei P20 is 102 which is higher than that of Samsung Galaxy S9+ and Google Pixel 2. At the front, the P20 comes with a 24-megapixel selfie shooter with 'Light Fusion' feature.

The smartphone is backed by a 3400 mAh battery and supports 'SuperCharge' fast charging. It carries a USB Type-C port but skips the aux input. Other connectivity options on the Huawei P20 include dual-SIM card slots, Bluetooth, Wi-Fi, GPS, 4G LTE and VoLTE for HD voice calling. In terms of optics, the smartphone is said to have a 16-megapixel camera on the back, with f/2.0 aperture, 4K video recording, and dual-tone LED flash and a 25-megapixel camera in front for selfies. The cameras feature Sensor HDR mode to accommodate the light settings for ideal photography, as well as the AR stickers. There is an AI album as well, where the artificial intelligence will recognize the photo library and sort them into collections based on people, places, time and events.

Recently OnePlus has also announced that the company is going to launch its latest smartphone with iPhone X like notch.