Home » News » Tech » WhatsApp E2E Encryption: What Data the Police Gets And What Not
2-MIN READ

WhatsApp E2E Encryption: What Data the Police Gets And What Not

While the actual WhatsApp chats (including multimedia files) are end-to-end encrypted this is what data the police can squeeze out from WhatsApp if they want.

WhatsApp takes user’s security and privacy very seriously. Having said that, the Facebook-owned messaging app also “works closely with the government and police whenever necessary.” WhatsApp had recently shared a set of guidelines for law enforcement officials seeking records from it. WhatsApp spokesperson Carl Woog in his visit to India has further clarified the company’s take on dealing with government requests for information of a particular user.

“We are a part of Facebook now and contribute to Facebook’s transparency report. In general, we work closely with governments whenever necessary, if there is a critical incident or when they (the government) reach out to us. But because of End-to-End (E2E) encryption enabled by default on WhatsApp, the contents of the messages are not visible to anybody except for the sender and recipient,” said Woog.

“I think what we have tried to talk to governments as to how we can respond to their requests. As we are a part of Facebook, the government requests do come in and we respond, added Woog. He stresses on the fact that unlike other messaging applications out there, if the government requests for content, “we just let them know that we can’t provide it because the chats are E2E encrypted.”

"We just let them know that we can’t provide it because the chats are E2E encrypted.”

WhatsApp has officially confirmed that there are no backdoors to intercept encrypted WhatsApp chats. Also, WhatsApp never stored chats on its servers, even prior to introducing E2E encryption. Only undelivered messages were earlier saved on WhatsApp servers but were automatically deleted after 30 days.

If not messages, how else does WhatsApp “respond” to government requests? For those unaware, WhatsApp collects some metadata of users which could be passed on to law enforcement agencies if a request is made through proper channel.

While officially there is little information on WhatsApp metadata. Court cases have reportedly revealed that the WhatsApp stores obvious metadata like mobile numbers, device type, mobile network, mobile numbers of contacted people on WhatsApp, data on web pages visited through the app, time of chats, duration of chats, IP addresses, location and contacts.

With whom you are chatting, for how long and at what time. And possibly, your contacts as well.

So, while the actual WhatsApp chats (including multimedia files) are E2E secured, this is what data the police can squeeze out from WhatsApp if they want:

-Your name, mobile number, IP address, location, mobile network and your mobile handset type.
-With whom you are chatting, for how long and at what time. And possibly, your contacts as well.

Facebook reportedly informs the user when their account is being probed (if not restricted by the government). But as for WhatsApp, there is no confirmation on the same. Global non-profit digital rights group, The Electronic Frontier Foundation, rated WhatsApp low score on tech organisations with pro-user public policy.

WhatsApp E2E encryption as explained by the company: 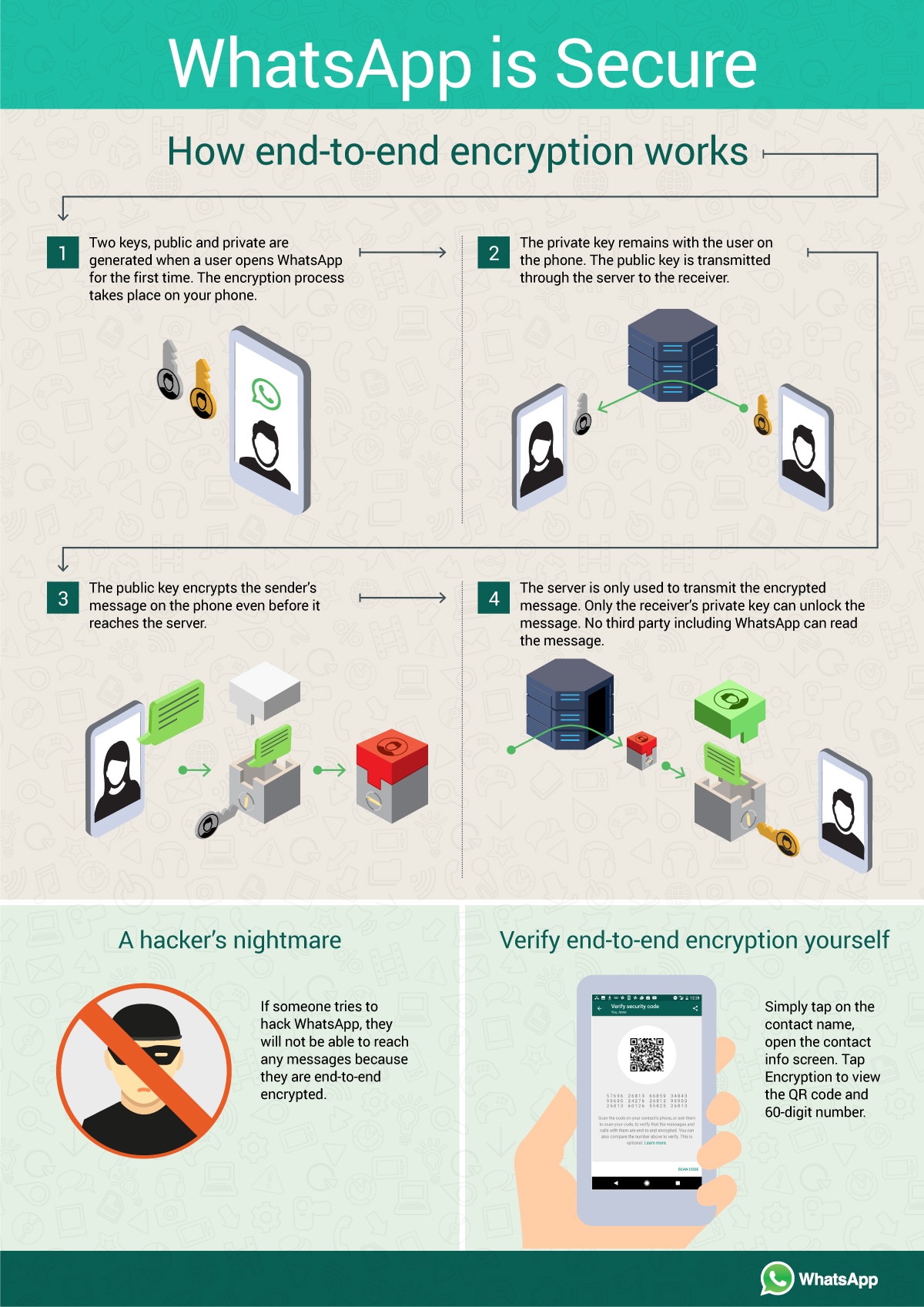