The relatively unknown Whizzer gives mainstream earphones a strong contender, although the sound is not bereft of its own inconsistencies.

If you are not actively invested into owning the best possible audio experience at any price point whatsoever, chances are that you haven’t heard of the Whizzer brand, yet. This relatively obscure brand is what our friends over at Headphone Zone refer to as ‘Chi-Fi’ — new imports of audio brands from China that claim to offer ‘hi-fi’ audio at near-bargain prices. However, do not let the ‘made in China’ tag make you averse of the Whizzer Kylin A-HE03. From the packaging and in-box contents to the audio signature and its position in the market, the Kylin A-HE03 has a lot of things to talk about.


While we generally begin by discussing the audio quality, the Whizzer Kylin A-HE03 demands otherwise. Contrary to most in-ear monitors within a budget, the Kylin A-HE03 ships with a rather intriguing packaging. You get the in-ear monitors as detached units, along with a rather fancy Kylin metal plate for branding purposes. Inside the box, you get a 2-pin, 5N optical fibre copper cable, with an unbalanced, 3.5mm TRS jack to suit all phones. Then, there are multiple ear tips — silicone and memory foam — for you to find the right fit. Lastly, you get a faux leather carrying case that looks quite upmarket. 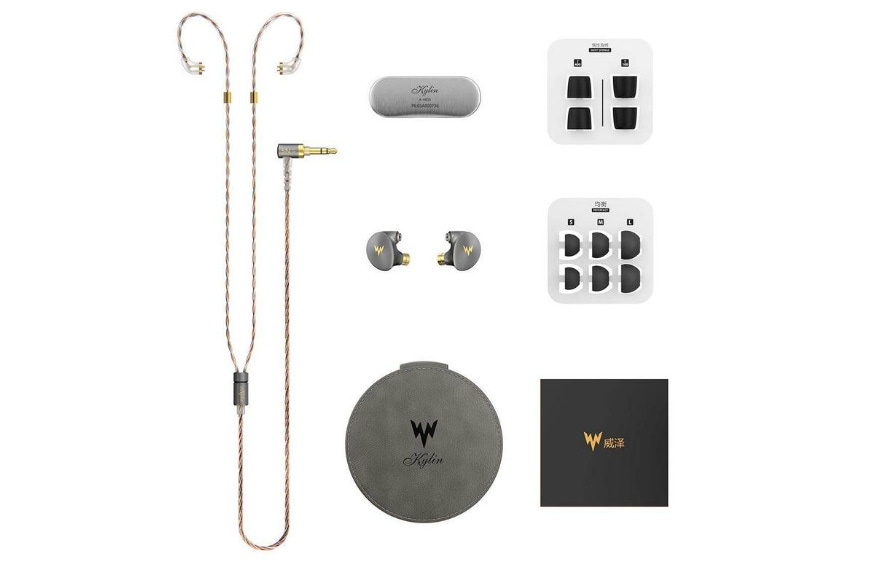 The exhaustive contents of the Kylin A-HE03's box

What differentiates the Whizzer ‘buds from everything else you get at this price point (Rs 9,999 at Headphone Zone) are the audiophile trappings. From the braided ‘audiophile’ cable, to the DIY setup, Whizzer has aimed the Kylin A-HE03 at hobbyists that do not mind exploring audio options beyond the usual brands, and thrown in premium elements such as the metal-built earpieces and the leatherette carry case to woo in the rest of the buyers.

What this does is grab your attention right at the onset. While the 2-pin connector means limited aftermarket cable choices, this wouldn’t sound unusual to audiophiles, since many brands such as Campfire Audio equip their earphones with similar interfaces. It is an important leverage to have, as while most users would be plugging it into their phones, Whizzer wants its target buyers, the amateur audio hobbyists, to know that they can swap the in-box cable with a balanced cable should they want to.

The cable is what makes a significant difference here. Contrary to the standard cables, Whizzer’s in-box cable offers a higher quality conducting material (signified by ‘N’ in the cable’s in-box description) than most mainstream cables. While 5N copper cables are not the pinnacle, it is still commendable to find a higher quality cable in a pair of earphones that are priced at an arguably reasonable point. The only qualm that users may have in this is the lack of a 2.5mm male adapter, which may have helped its case in absolute stereo separation.

Apart from this, the Whizzer Kylin A-HE03 creates all sorts of right first impressions, and clearly sets your expectations high in terms of the auditory experience they aim to offer.


The Whizzer Kylin A-HE03 are hybrid earphones, pairing a Beryllium dynamic driver to produce the lows, with two Knowles balanced armature drivers to produce the mids and highs. The configuration pays dividends, and its effect is clear in the shallow V-shaped audio signature that it produces. However, despite the added warmth of the sound due to the slightly heightened bass, the mids and highs do not sound compromised, since balanced armature drivers typically produce very clear mids. They were, after all, designed to power hearing aids.

What you get here is great clarity of audio, and decent texture reproduction as well. The audio timbre is consistent and true to source, which is further contributed to by great audio composure. The lows are strong and bold, but have a good sense of balance so as to not overwhelm you with it. The added warmth of the bass have a pleasant effect on the tone colour of the mids, wherein most vocals sound sweet, and not largely attenuated. There is a slight lack of punch in high falsetto vocals, and while that does mar the otherwise soaring experience, it is only one of the few areas where the Whizzer Kylin A-HE03 fails to impress entirely.

While sounding appealing to bass-heads, the use of balanced armature drivers in the highs mean great precision of sound. As a result, the highs sound beautifully refined, with great accuracy of sound but with a slight restraint, so as to not overpower tracks. It is a tad high for my preference, and the increased highs and lows do take away a little from the overall audio balance of the earphones, should you prefer a more neutral audio balance. However, you have the added advantage of excellent clarity with the Kylin A-HE03, which means that you can pair it with an external DAC, or use your in-device DAC (I tried my Samsung Galaxy S9+ with it) to get a more favourable audio balance.

In simpler language, the bass sounds rather strong, but clean and tight. It is a tad higher than the ideal neutral balance, but many tend to like that in their audio palette. The mids are clean, and sound warm and sweet. The highs are clean, too, but are slightly heightened, as well. What this means is that without any enhancements, Pink Floyd’s The Great Gig in the Sky sounds soaring and bright, but a bit piercing. The same can be said of The Who’s My Generation, where a more neutral audio signature could have been preferable. However, the warm, power-driven sound helps singers such as Nightwish’s Tarja Turunen, with Nemo sounding like an absolute ripper. Baritone voices such as Poets of the Fall’s Marko Saaresto sound great, especially in tracks such as Late Goodbye, with the natural quiver in the vocals replicated with near perfection. Sigrid’s Everybody Knows can induce a strong sense of emotion in you while listening, which for any earphone is game, set and match.

Soundstaging is not expansive, but then again, IEMs are not known for great soundstaging. This particular aspect is average at best, and while the Whizzer Kylin A-HE03 do offer some room, the pricier RHA T20 does a better job at audio spacing. That said, audio separation is, yet again, excellent. Thanks to the balanced armature drivers, you can make out almost every instrument that is playing, which makes for a very pleasant experience. While it does have certain shortcomings, the Kylin A-HE03 offer stellar clarity and audio resolution, which is what makes these great fun, and among the best IEMs to buy at their price.


The oblong earpieces that house the drivers are a tad large and heavy, but Whizzer uses a looping behind-ear cable to aid your case for a better fit. However, despite the exhaustive ear tip choices, I struggled to get the right fit. The heft of the earbuds mean that they do not stick well to your ears, and the gap between your ear canal and the earpieces mean much of the goodness can be lost. Adding to that is the slight annoyance of the cables, that get intertwined very easily. The behind-ear loop could have been better as well, and feel a tad flimsy. Overall, we would suggest you spend some time in finding out the right fit for you, before you hit the road with the Whizzers. 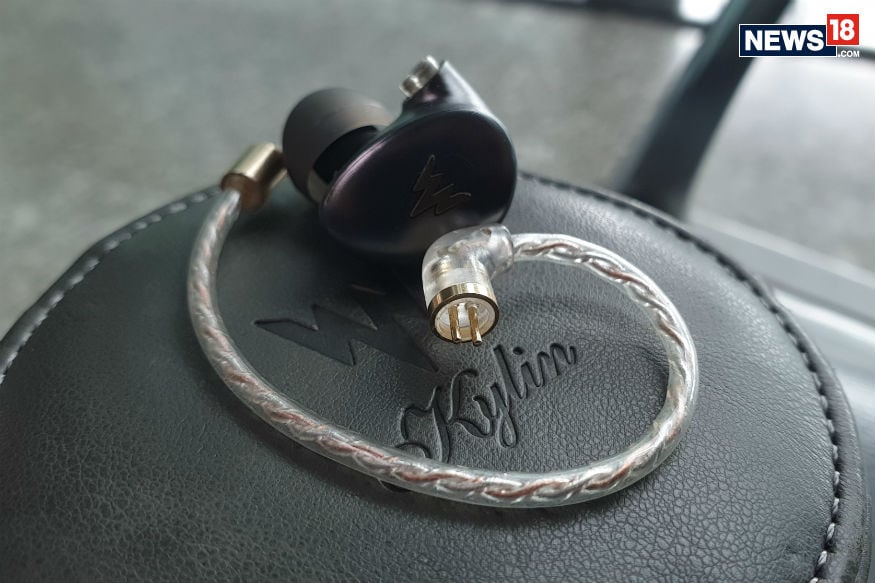 The box and earpieces feel premium, but the latter is rather heavy

While I personally like the light copper braided cable design, many might not find it particularly appealing in terms of design and colour. Nevertheless, the combination of dark teal earpieces, with a shiny gold ‘W’ logo embossed in Batman-esque fashion, coupled with a mid-cable splitter of the same colour palette, does imbibe a sense of style. The gold inlays might not work for all, but for us, they do.

The carrying case has been sturdy enough in about 45 days of extensive travelling and rough shoving around in backpack corners, without any blemish on the leatherette exterior — a big positive for those who travel a lot. Interestingly, the Kylin also drew a few co-passenger queries in flights, which mean that even if the design is polarising, it is intriguing, at the very least.

The overall earphones feel durable, and while I do understand the heft from the three-driver layout, I do wish they were a tad lighter. As with every audiophile cable, you do not get pesky in-line remotes and microphones, although audiophiles and hobbyists wouldn’t expect any, either.


At Rs 9,999, the relatively obscure Whizzer Kylin A-HE03 is a winner. It works just as intended with high resolution players such as the HiBy R3, as well as mainstream smartphones. It fits a whole lot of genres, and being on the warmer end of audio signature, would presumably fit a lot of audio palettes. The audiophile pretensions work well, too, and if you are passionate about good, earnest sound, the Whizzer Kylin A-HE03 offer an excellent stepping stone into the audiophile world.